Victims of Hurricane Michael are represented by climate deniers 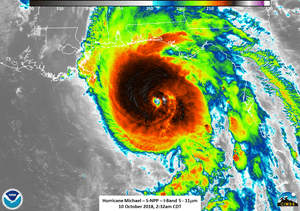 It is a wonder that a state like Florida, which will get pummeled by Michael, could vote for someone that denies climate change. Think of how backwards the situation is the Florida Department of Environmental Protection has reportedly been banned from using the terms climate change and global warming. This policy reportedly went into effect when Florida elected a science denier, Rick Scott, to governor.

Rick Scott has been condemned by people in Florida for his backward stance. It is climate denial like his that has contributed to the suffering of residents in the state.

Its not that my colleagues havent tried to help Governor Scott understand how his policies hurt his state. A few years ago, scientists met with him and urged him to take climate change seriously. He remained silent.

It isnt that the local media hasnt tried. Major newspapers have called upon Rick Scott to take action on climate change. But to little avail. Maybe its because Rick Scott invests in companies that oppose climate change regulations?

Fortunately, while Rick Scott is now running for Senate, hes being challenged by Democrat Bill Nelson. He understands science and believes in facts. Nelson writes,

Climate change is real, and we must take action to protect ourselves. Denial of this scientific reality is simply not an option, especially in Florida.

Rick Scott isnt the only politician from the state of Florida to reject science and diminish climate change. Senator Marco Rubio has as well.

Florida voters could put an end to this nonsense. In the current race for state Governor to succeed Scott, Republican candidate Ron DeSantis is ignoring science. He recently claimed that climate change is not an issue for states to mitigate. Say what?

Lets hope Ron DeSantis loses. His opponent is Andrew Gillum, who is clear as day when he says,

Climate change is real, it is impacting Floridians directly, and we will not be silenced on the matter. When Im Governor, we will not just talk about climate change — we will put Floridians to work to make our state more energy independent and resilient and transform our state into the Solar Capital of the United States!

But its not just Florida; there are other states getting hit by Hurricane Michael that are also led by climate deniers. For instance, Georgia will be hit by Hurricane Michael. One of the senators there, David Perdue, congratulated President Trump when he pulled out of the Paris Climate Accord. Georgias other Senator, Johnny Isakson also denies the science. He too supported President Trumps reckless actions.

At the congressional district level, the denial continues. Republican Representative Barry Loudermilk was pleased when President Trump walked away from the Paris Agreement. His opponent, Flynn Broady trusts and understands science, however. His position could not be any clearer as he writes,

We have the technology and knowledge to develop and place into practice renewable energy sources, reduce carbon emissions, and move our energy needs away from carbon fuels. We owe it to the world to participate in the Paris Agreement and the Kyoto Protocol. As the leading industrial nation we must lead the effort.

Climate deniers will try to say this article is gleeful about a hurricane. It is not. First of all, this hurricane and all hurricanes that hit land can cause death and destruction. I pray that people heed warnings and get out of the way. I hope people stay safe, regardless of their understanding of climate change and its effect on storms.

Second, elections have consequences and if we as a society want to create a better world and reduce climate change, we have to vote for people who understand science, who believe in facts. Climate deniers are making these storms worse by stopping action on climate change. What the hell do we expect to happen when the deniers are writing the laws?

Third, for those who say taking action on climate is too expensive, how about you add up the worldwide costs of climate inaction over the past decade. My response to you is, its too costly to do nothing.

Fourth, what the hell happened to the Republican Party? The GOP formerly thought of itself as the party of intellectuals. How did you become a party where denying science is a litmus test? Where are the Republicans who actually understand climate change and care about it? If you can find one, tell me. Maybe Ill even write about them on this site.

Finally, climate change is only starting. It will continue to get worse and worse. And that means storms will get worse, droughts will get deeper, flooding more severe, and the costs will go up. What we are seeing now and what weve seen over the past decade is just a small taste to come of what the future will bring if we dont take this problem seriously.

Good luck Florida and Georgia. My thoughts are with you. See you on the other side.