why I was born to be a psychiatrist – Trending Stuff 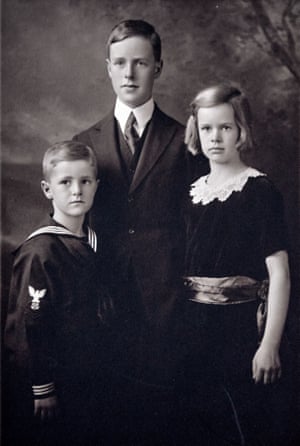 Growing up in a family where mental illness seemed to swim in the genes, though, meant that Hallowell became comfortable around its manifestations. Unorthodox as his childhood was, he is keen that his stories serve as a loving appreciation of his relatives, as well as a catalogue of their illness. My family were wonderful people; they were brilliant, funny, eccentric. They lived life as best they could. I wanted to know what had happened to them. This is my way of honouring them.

Hallowells father had been commander of a destroyer escort during the second world war, fighting German submarines in the North Atlantic. His uncle, Jimmy, held back by a severe and undiagnosed anxiety disorder, was unable to continue a career in banking, trying his hand instead first at farming, before buying a run-down bowling alley.

Top of his class at Harvard, Hallowells brother Johnny was a sought-after writer in Hollywood, before a psychotic episode in 1971 incipient bipolar disorder and alcoholism finished his career. He never regained his full mental powers. Thats too bad, Hallowell says.

Dorothy, meanwhile, remarried disastrously. Her new husband, Unger Hallowells stepfather until the couple divorced when he was 14 was himself traumatised by his first wifes suicide. The couple were often drunk by teatime, their subsequent behaviour erratic, distracted and, in Ungers case, aggressive. Hallowells mother never gained control of her drinking.

In more tolerant times, with the advances that have since been made in the fields of mental illness and addiction, their experiences would have been different, he says. It is very sad that they didnt have the really spectacular lives they could have had. They suffered a lot, unnecessarily.

While Hallowell acknowledges the benefits of correct medication being prescribed lithium saved his fathers life, he believes he feels strongly that also giving people time to talk, sitting and listening, remains key to helping those who are mentally unwell.

We have become far too much a profession of diagnose and medicate. In many practices you have 20 minutes with a doctor and come out with a diagnosis and a prescription. These two results should not be the sole aim, he says. There is so much more to it [such as] : How are you? What is your story?

Beginning his career as a psychiatrist, at the Massachusetts Mental Health Center in Boston in 1979, Hallowell instinctively sensed the job was the logical continuation of talking with Uncle Jimmy about why he went into farming instead of staying in finance.

His years of psychiatric practice have helped him make some sense of his family and self though he now specialises in ADHD, a condition with which he himself was diagnosed in 1981, rather than psychosis. The childhood desire to cure his loved ones, to have them live happily ever after, may have proved impossible; but his expertise has allowed him to appreciate them and dismiss any notions of anger. I honestly believe that to understand all is to forgive all, and I see how these people came to be who they were.

Looking back, there were, he says, defining moments in his family relationships. He recalls an incident while he was a student, before he settled on psychiatry. His father had stopped taking his medication, become very unwell and been admitted to hospital.

We went into the grounds for a walk and my father pulled out a length of rope he wasnt supposed to have. He asked me if he should hang himself from the tree branch. I realised then what it meant to be crazy. I saw in my own father that there is another state of mind which is fundamentally different to that which I and most people live with.

Throughout his career, he says, his family his parents and brother have now died have remained an important inspiration. It is like they are cheering from the balcony. They are my band. I am never without them..

Because I Come From A Crazy Family: The Making Of A Psychiatrist, by Edward M Hallowell is published by Bloomsbury, 20. To order a copy for 17, go to guardianbookshop.com or call 0330 333 6846.