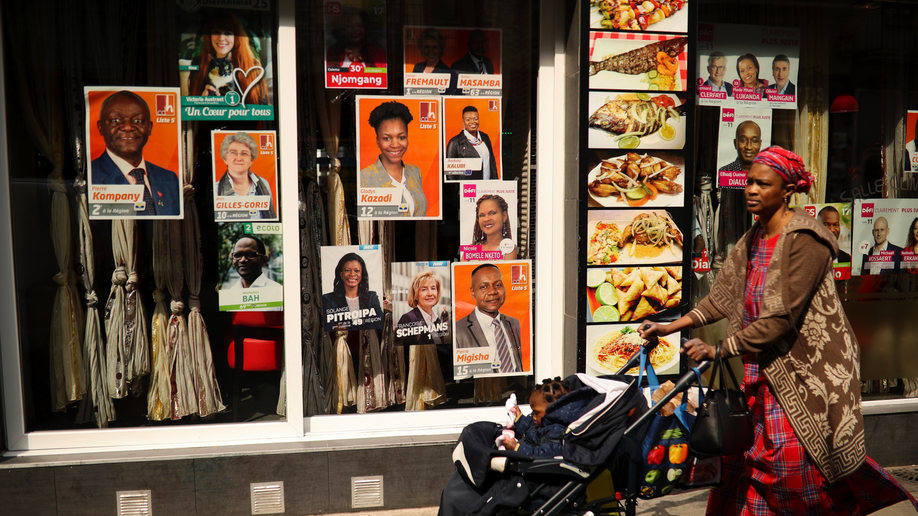 A woman walks past political campaign posters placed on a restaurant window at the African Matonge quarter in Brussels, Wednesday, May 22, 2019. Belgium, which has one of the oldest compulsory voting systems, will go to the polls for regional, federal and European elections on May 26, 2019. (AP Photo/Francisco Seco)

People sit on the grass near to political campaign posters near the European Parliament at the European quarter in Brussels, Thursday, May 23, 2019. Dutch and British voters were the first to have their say Thursday in elections for the European Parliament, starting four days of voting across the 28-nation bloc that pits supporters of deeper integration against populist euroskeptics who want more power for their national governments. (AP Photo/Francisco Seco)

BRUSSELS – While all EU members go to the polls this week, Belgians on Sunday are also voting in a general election, looking to end months of political limbo sparked after the biggest party in the governing coalition quit over Prime Minister Charles Michel’s support for the U.N. migration pact.

Michel has steered a caretaker government doing only day-to-day business since December, but with the country’s 8 million voters choosing from more than a dozen parties, it’s likely to prove difficult to quickly form a stable coalition.

The Flemish N-VA party takes a hard line on migrants and pulled out of government after Michel sought parliamentary approval for the U.N. Global Compact.

The N-VA has been campaigning hard, and surveys suggest the party is too big for a future government to avoid.