‘Constable Scarecrow:’ Police in Canadian town use cutouts of officers to catch speeders

(CNN)A town in Canada is welcoming four new police officers but their personalities are a little flat.

Constable Michael Hagel told CNN the department just received the new officers. Costing $350 apiece, or nearly $500 Canadian, they are built with an aluminum composite, and the officer depicted on them has a jacket with reflective tape, making them just as easy to see at night as an actual officer.
The idea is to stand up the aluminum officers by the side of the road and at key intersections to compel drivers to follow road rules.
“We’ll start the program in the first week of June by putting the scarecrows in a local school zone,” Hagel said.
From there, they’ll deploy them to other high-risk areas in town, where there’s a lot of traffic and where wrecks often occur, Hagel added. As drivers catch on that these aren’t real cops, the cutouts will be moved to other locations, cycling back and forth between live officers and the decoys.
Hagel is the model for the scarecrow being used in Lloydminster, and before the cutouts are deployed, he had some fun posing with his doppelganger. 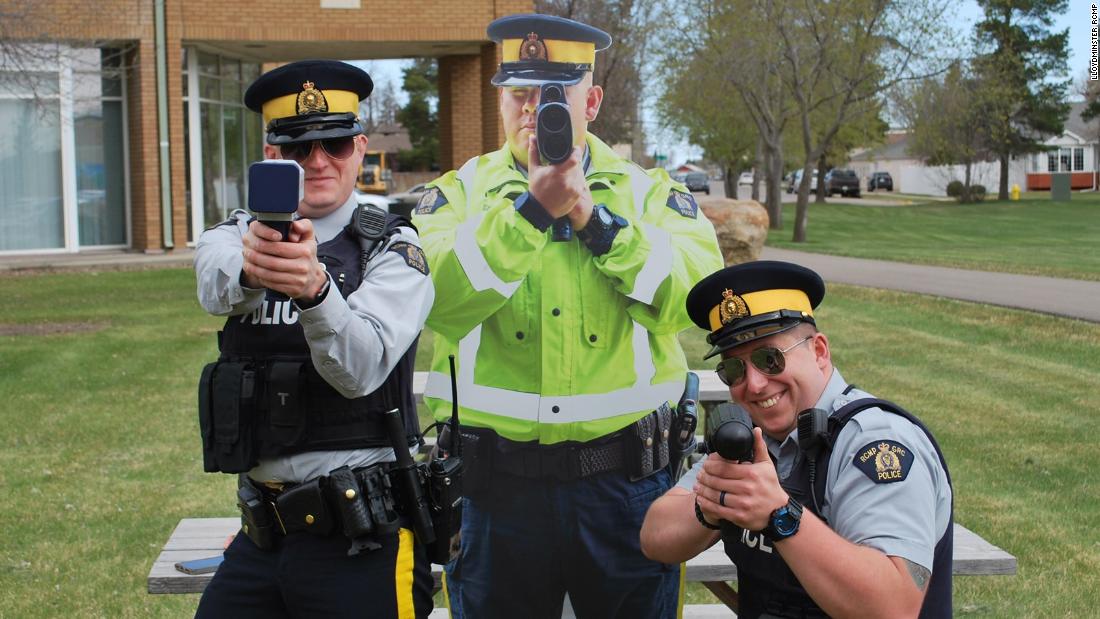 Lloydminster’s initiative is inspired by a pilot program in Coquitlam, British Columbia, where the cutouts were nicknamed “Constable Scarecrow.” That program helped cut the number of drivers caught speeding by 50%, the RCMP says.
Hagel said an employee of Lloydminster saw how the program was working there and wanted to repeat it.
“Our main goal is to improve traffic safety,” Hagel said, adding the best way to do that is to nudge drivers into following the law.
In 2016, 85% of collisions in Alberta involved at least one driver who made a driving error, according to the Alberta RCMP.