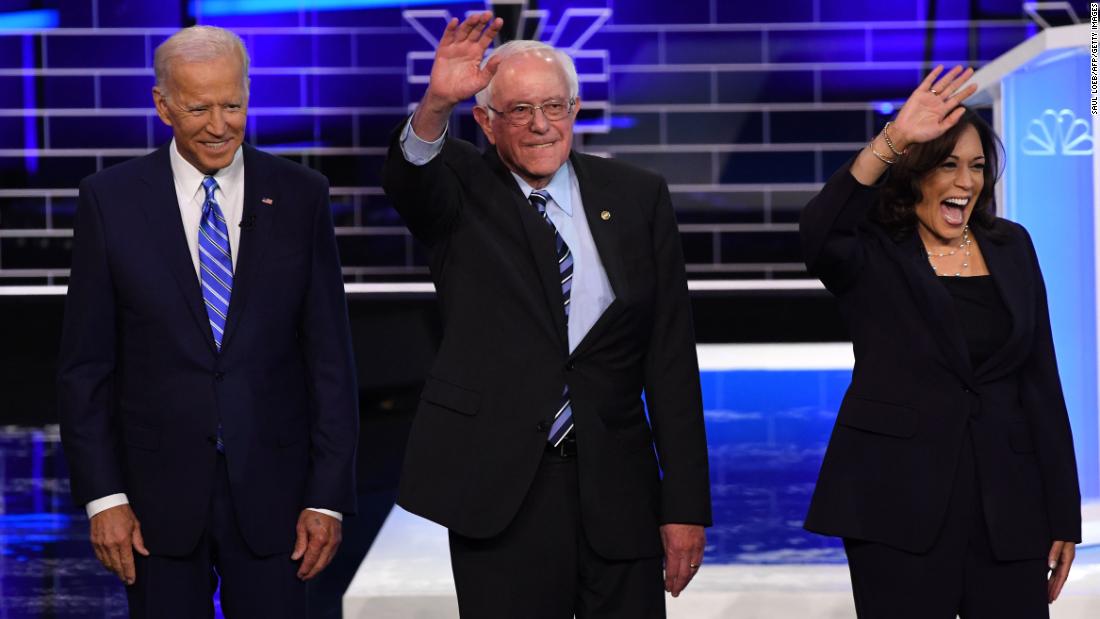 (CNN)With 211daysuntil the Iowa caucuses and a record number of Democratic candidates, the 2020 election is already in full swing.Every Sunday, I will break down the5BIG storylines you need to know to understand the upcoming week on the campaign trail. And they’re ranked — so the No. 1 story is the most important of the coming week.

5. It’s the economy, stupid?: President Donald Trump got more good economic news this past week, with 224,000 jobs being added in June — and the unemployment rate still below 4%.
Half of Americans (50%) say they approve of the job Trump is doing on the economy, according to a new CNN poll, while 44% disapprove. What’s remarkable is that the President’s overall job approval rating in that same poll was 43%, while his disapproval is 52%. (Trump’s approval rating has been at 43% dating back to a late April CNN poll.)
That disconnect is ahistorical: Good economic news has always equaled strong approval numbers for the incumbent president. Trump gets credit for the good economy, but it doesn’t move his overall approval numbers out of the doldrums.
Will that change as the election nears — and voters start paying more attention to the race and the economy the President has presided over? Or is this another case in which Trump is entirely outside the historic norms?
4. The citizenship question: The Trump administration seemed set to stand down on the President’s push to add a citizenship question to the 2020 census — until the President decided he wasn’t done fighting.
Trump said Friday that he was considering an executive order to add the question, although it remains to be seen how such a move would fare legally given that the Supreme Court recently ruled that the administration hadn’t proven why the question should be added.
“It’s one of the ways — we have four or five ways we can do it,” Trump said of the executive order move. “It’s one of the ways that we’re thinking about doing it very seriously.”
The question now is whether Trump is bluffing (as he often does) or whether this is something (like the national emergency on the border) where he is willing to put action behind the talk. Either way, the citizenship question has to be resolved very soon, as the process of printing and distributing the census forms is hugely laborious.

3. It’s a big $$$ week: Here’s the way fundraising deadlines work in a presidential race: The candidates who are proudest of their totals release what they’ve brought in almost as soon as the deadline passes.
So we know that South Bend, Indiana, Mayor Pete Buttigieg raised almost $25 million(!!!) between April 1 and June 30, while former Vice President Joe Biden raised $21.5 million, Vermont Sen. Bernie Sanders collected $18 million and California Sen. Kamala Harris almost $12 million.
But in politics, as in life, what’s not said often matters more than what is. In this context, that means that the candidates who haven’t announced their fundraising totals yet are the ones to keep an eye on because, well, they likely aren’t very happy with what they brought in.
On that list: New York Sen. Kirsten Gillibrand, New Jersey Sen. Cory Booker,  former Texas Rep. Beto O’Rourke and Minnesota Sen. Amy Klobuchar.
Reports for the past three months have to be formally filed with the Federal Election Commission by July 15, which means we are going to get a look at these candidates’ money numbers — whether they like it or not — by the end of this week.
2. Bernie’s next act (does he have one?): While his most loyal followers will debate this point, there’s no question that the 2020 Democrat(ic socialist) has hit a bit of a wall already in the presidential campaign. While he began the campaign trailing only Biden, Sanders has watched as he’s been eclipsed in several recent national polls by not just Massachusetts Sen. Elizabeth Warren but also California Sen. Kamala Harris.
Sanders’ campaign team insists this is simply a blip on the radar, comparing it to the 2016 race when lots of DC-based political pundits thought Sanders had no chance — only to watch his huge grassroots following help him drastically overperform expectations in the primary.
Maybe! But the 2016 comparison doesn’t feel entirely apt, since in that race Sanders was running against only Hillary Clinton, the definitional establishment pol distrusted by liberals. In this race, there are lots of other candidates to fall in love — or even like — with, like Warren, who has begun to erode Sanders’ strength among the most liberal Democrats.
What is Sanders’ message to voters who have jumped ship to Warren (or Harris)?
1. Biden’s new leaf? In a speech in Sumter, South Carolina, on Saturday — alliteration! — the former vice president sought to put a rough few weeks, which began with what was interpreted as praise for segregationist senators, behind him.
“Was I wrong a few weeks ago to somehow give the impression to people that I was praising those men who I successfully opposed time and again?” Biden asked rhetorically. “Yes, I was. I regret it.”
The address seemed a very clear attempt by Biden to press the “reset” button on a campaign that has already lost altitude from its early heights following a series of self-inflicted wounds that culminated in a weak debate performance at the end of last month.
While Biden is trying to sweep his past few weeks away, he also made clear in the last 48 hours that he’s not changing everything. Speaking about the rising left in his party, Biden told CNN’s Chris Cuomo: “I think [Alexandria] Ocasio-Cortez is a brilliant, bright woman, but she won a primary. In the general election fights, who won? Mainstream Democrats who are very progressive on social issues and very strong on education and health care.”
What to watch: Can Biden stay the course he laid out in Sumter? And does sticking to his guns when it comes to his liberal critiques pay off?