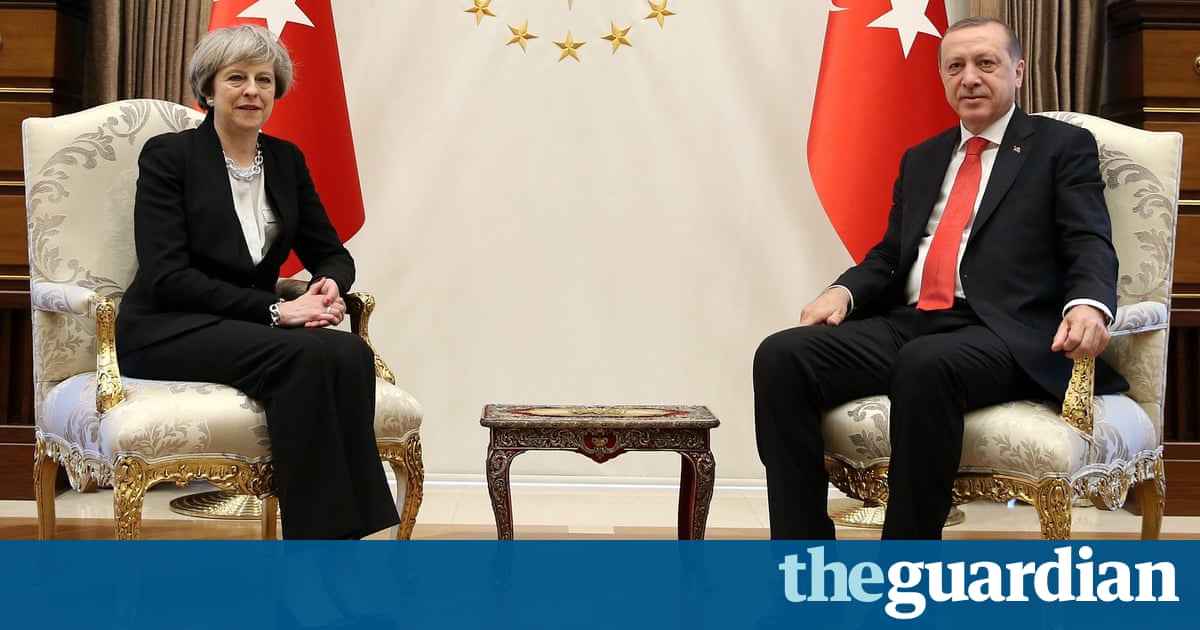 May was in Ankara on the final leg of a diplomatic tour that had taken her to Washington to meet Donald Trump and underlined the compromises inherent in seeking closer trade and diplomatic links outside the European Union in the build-up to Brexit.

Turkey is a fellow member of Nato and has cooperated with Europe in tackling the refugee crisis, but Erdoans government has locked up thousands of political dissidents and protesters in the wake of an attempted coup last year.

Speaking alongside a stony-faced Erdoan in his opulent office, May said: Turkey is one of the UKs oldest friends our relations stretch back over 400 years but there is much that we can do in the future to build on that relationship together. Im proud that the UK stood with you on 15 July last year in defence of democracy, and now it is important that Turkey sustains that democracy by maintaining the rule of law and upholding its international human rights obligations as the government has undertaken to do.

Erdoan said the two countries would press ahead with talks aimed at boosting business ties, adding that he hoped that trade between the two countries, now worth $15bn, could soon reach $20bn. The pair also discussed security and counter-terrorism cooperation and the conflict in Syria.

Downing Street insisted that there was no contradiction between having concerns about a countrys human rights record and signing trade deals. The PMs approach is quite clear: she thinks it is important and in the UKs interests to engage with Turkey.

But May faced criticism from some politicians for doing business with Turkey at all. The Liberal Democrat leader Tim Farron said: As Theresa May seeks trade deals with ever more unsavoury leaders, she ignores the simple point that the most successful countries around the world respect human rights. Economies flourish in free societies.

The prime minister, who had earlier laid a wreath at the mausoleum of Kemal Atatrk, the founder of modern Turkey, said: This agreement underlines once again that Britain is a great, global trading nation and that we are open for business.

Andrew Smith, of Campaign Against Arms Trade, said the deal signed with Turkey confirmed that the UK was prepared to sell weapons to countries that flouted international human rights laws. There is a hypocrisy at the heart of UK foreign policy, and the message this sends to those being repressed or locked up for their beliefs is that their human rights dont matter. The fawning images and uncritical support are not just a propaganda victory for Erdoan; theyre a slap in the face for human rights campaigners and political prisoners across Turkey.

Speaking before the prime ministers arrival in Turkey, Amnesty Internationals UK director, Kate Allen, said the visit was a vital opportunity for May to ask probing questions about allegations of excessive use of force and ill-treatment of detainees by Erdoans security forces. The human rights situation in Turkey had deteriorated markedly during the state of emergency imposed after last Julys botched coup, said Amnesty.

Separately Downing Street announced that, as a result of her talks with Trump, May had agreed to set up a preliminary trade negotiation agreement with Washington, aimed at smoothing the way to a bilateral trade deal when Britain leaves the EU.

Britain must tread carefully in laying the groundwork for future trading relations, because it is not allowed to open formal negotiations with other countries while still inside the EU. However, No 10 sources suggested there were a series of steps that could be taken, short of drawing up a deal, that could smooth the path to the post-Brexit world. That could include lowering so-called non-tariff barriers, such as bans on particular products, and cutting down on regulations.

Liam Fox, the international trade secretary, has been travelling around the globe seeking to lay the groundwork for future trade talks.

The Turkish defence deal will see BAE Systems collaborate with Turkish companies to build a bespoke fighter jet, the TF-X. It is worth 100m small in economic terms, but Britain hopes it will kick off a long relationship and open the door to becoming Turkeys main defence provider. We would expect this to unlock further deals, a spokeswoman said.

May and Erdoan also agreed to form a joint working group to begin talking about a bilateral trade deal that could be signed after Brexit. Britain currently trades with Turkey through Ankaras trade deal with the EU, which will no longer be valid when Britain leaves. The working group will be the 13th Britain has established to scope out potential agreements.

The Turkish prime minister, Binali Yldrm, said that, as well as signing the so-called heads of agreement for the jet aircraft deal, May and Erdoan discussed security cooperation and counter-terrorism.