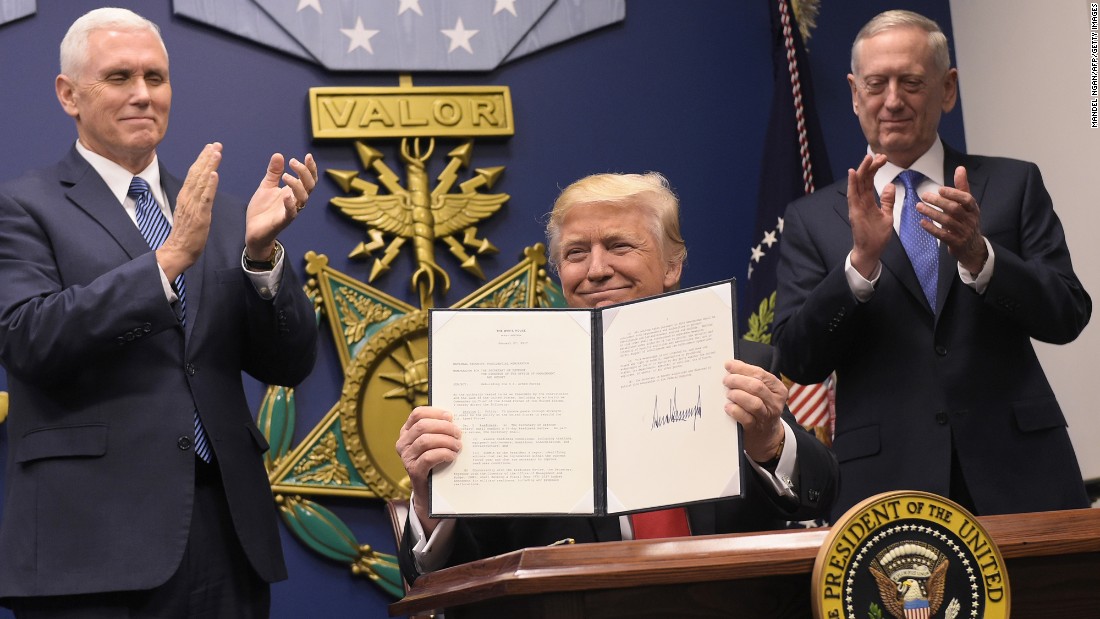 (CNN)President Trump is moving at a fast and furious pace. He is overwhelming Washington with a series of provocative executive orders that aim to fulfill his campaign promises.

Trump issued an explosive executive order closing the borders to refugees for 120 days and to citizens from seven countries with Muslim majorities for 90 days.
The president has instructed the agencies to scale back on the Affordable Care Act. He has directed them to start preparing to build the famous border wall with Mexico, in addition to hiring 5,000 more border agents.
Another executive order has called for the deportation of persons convicted or charged with a crime or who “pose a risk to public safety or national security.” If his order is enforced, sanctuary cities will not receive federal grants. There will be a major review of all regulations on American manufacturers while he is speeding up environmental reviews on key infrastructure projects.
Offering a direct jab at environmental activists, the president has ordered permits for the Dakota Access Pipeline and the Keystone Pipeline. He has put into place a hiring freeze in many federal agencies. Fulfilling two major pledges, Trump withdrew from the Trans-Pacific Partnership negotiations and announced that federal dollars would not be distributed to international non-governmental organizations that provide abortion. And there has been more.

If anyone doubted that President Trump meant business they should realize that this is no joke. Predictions about the First Hundred Days might now turn into discussions about the First Seven Days. Democrats are learning that the frenetic energy from FDR’s famous start in office in 1933 doesn’t feel so good when you are sitting on the other side of the political aisle. The president took some very big steps in his first week that signal the growing likelihood of a transformative and rightward period in American political history. The ban on refugees has awakened many people here in the US. and around the globe to just what’s at stake with this presidency.
While Republicans don’t always like the way Trump handles himself personally and they have problems with some of the positions, such as his statements about Russia, overall on Capitol Hill there has been a lot for Republicans to celebrate. As President Trump told a retreat of Republicans, “you’re not wasting your time.”
From the moment of his inauguration, Trump is revealing exactly how he plans to handle the challenges that stemmed from the 2016 election.
Just as President George W. Bush had to figure out how to govern after the contested 2000 election that was settled by a Supreme Court decision, President Trump needs to figure out how to move forward forcefully despite losing the popular vote by nearly three million votes and despite the controversy that surrounded the election as a result of FBI Director James Comey’s letters about Hillary Clinton and the rampant evidence of Russian intervention.

To the frustration of his opponents, one of Trump’s main tactics is to simply spread false information to support his claim that this was an election which gave him a mandate for sweeping change. Whatever his intentions are, he is telling lies. The most controversial and potentially damaging of these statements has revolved around repeated allegations that the only reason Hillary Clinton won the popular vote was because of massive voter fraud, much of it by illegal immigrants, that cost him at the ballot box. 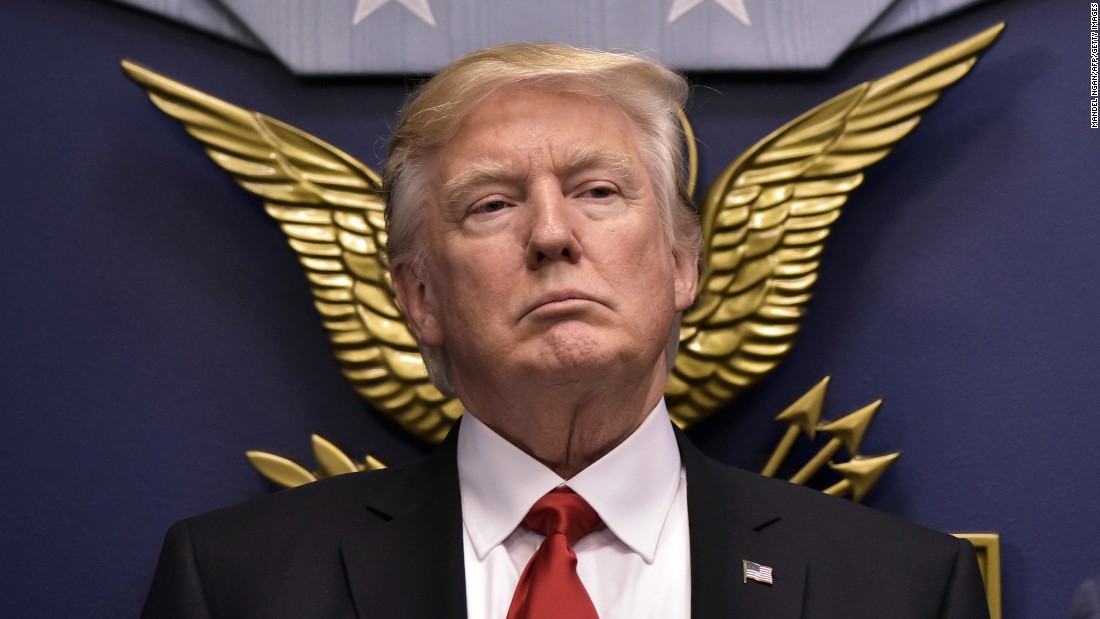 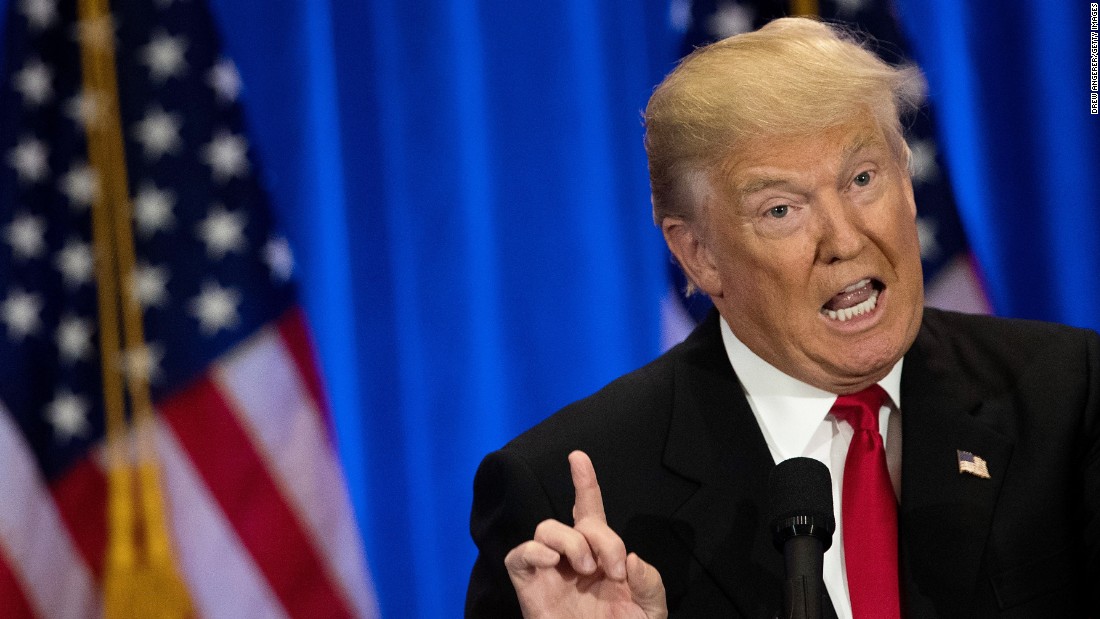 Many Americans might not like him, but the White House is betting that they will respect him as a chief executive who can move policies in an era in gridlock. This will be important so that when he does send Congress legislation, most Republicans will have little appetite to anger his energized supporters, and Democrats from swing states and districts, with a nervous eye on 2018, might just be willing to go along with some of his programs. The blitz of executive orders and memorandums are a way to undercut congressional opposition in the coming months.
And right now, the Congress is proving just how much polarization and unified government are working in his favor. The basic fact is that, like LBJ in 1965, Trump now enjoys one of those rare moments of unified government where the conditions for legislating are very good.

Not only do Republicans control the House and Senate, but the party is extremely disciplined and relatively united on most key issues. Congressional Republicans have rallied around the president on his Cabinet picks no matter how controversial. There has been little public blowback about the executive orders thus far, most of which fit very well on the conservative GOP agenda.
Congressional Republicans are aware of the opportunity they have to legislate and to move American policy in a rightward direction while dismantling President Obama’s legacy. Thus far, Trump has been able to count on them.
At the same time, recent weeks have shown just how fragile the Democratic Party has become. The resistance to Trump has been negligible. Democrats have stood by as Trump makes his moves. They look more like deer in the political headlights than prizefighters struggling to change the direction of a match.
For all the controversy and for all the chaos, the first week of the Trump administration, from the perspective of his supporters, has been a successful one. The outlines of a strategy have now become clear as are the very grave risks that Democrats will face if they keep passively watching this unfold.
The executive order on refugees might be the first of Trump’s decisions to start stimulating some serious grassroots and political opposition to this exertion of presidential power. But, as the first week has shown, it will take much more than complaints and simple protests to check this ambitious presidential agenda.