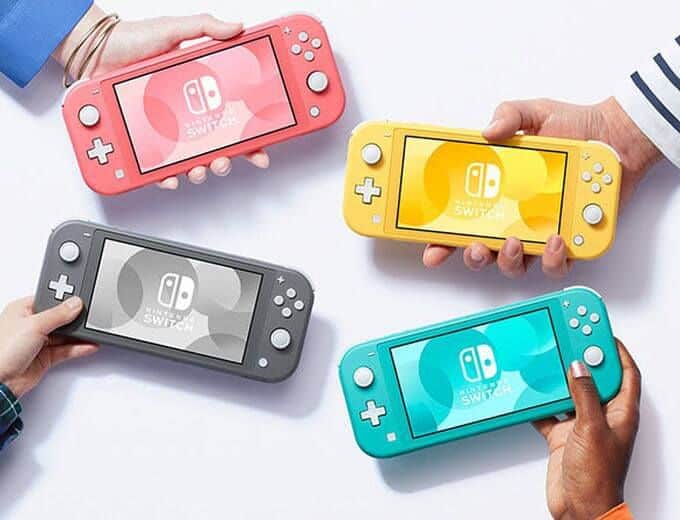 If you haven’t yet bought Nintendo’s newest console, the Switch, you might be unaware that Nintendo also released another version of it called the Switch Lite.

Nintendo created this version in order to be an affordable option for those who want to play all the great games the Switch has, but not spend hundreds on a new console. The Switch Lite cuts many of the features of the original Switch, but still has all the necessary components to enjoy your Switch games.

With the Switch Lite being around $200, and the original Switch about $400, it’s definitely worth looking closely at the Nintendo Switch vs the Switch Lite to see if you’d rather save the money and use the Lite instead.

Why The Lite Is So Much Cheaper

The Nintendo Switch Lite is technically just a handheld device, while the original Switch is an entire console you can hook up to your TV. This is possible because, besides the handheld device, the Switch has a dock you can set it into so that the game can be displayed on a television. The Lite lacks this ability, but makes up for it by being a powerful handheld device you can use anywhere.

The original Switch also has detachable Joy Con controllers on the sides. With the Switch Lite, the sides of the handheld are not detachable. It also has a full directional pad on the left-hand side. Otherwise, they have the same button layout and feel as the Switch Joy Cons. You also still have the ability to use Pro Controllers with the Lite, as you can connect them through Bluetooth.

Also, because the Switch console automatically charges the handheld and Joy Cons when connected to the dock, you will have to use an AC adapter to charge the Lite. This is included with the handheld. If you decide to buy Joy Cons separately, though, you’ll need to buy the charging stand for these, since they’ll have nothing to connect to in order to charge.

As far as overall features go, the original Switch outweighs the Lite. However, if you enjoy having an extremely portable and high quality handheld system, the Lite should definitely be your go-to.

Features Of The Switch Lite

This new iteration of the Switch may certainly be a better option if you want a budget version that allows you to play the console’s games. There also is one feature of the Lite that actually outdoes the Switch.

This is the Switch Lite’s processing chip, which uses a custom Tegra X1+. This is a slightly upgraded version of what was used in the original Switch, and works more efficiently. This gives the Lite a much longer battery life. Eventually Nintendo did rerelease the Switch in 2019 with this processor to help it run faster and lengthen battery life.

The Lite also has the same display specs as the Switch’s handheld. They both have an LCD screen with a resolution of 720p. Of course, the Switch console can have an output of 1080p when docked to a TV, but as far as the handheld display goes, they are the same.

Also as with the Switch console, the Lite allows you to save game progress on the cloud with Nintendo’s online service. This means that if you eventually decide to upgrade to the full Switch console, you could potentially have access to your game saves.

But what games, exactly, are you able to play? The games supported for the Switch Lite are virtually the same as the Switch, besides ones that don’t support handheld mode. However, if you have a separate controller or Joy Cons, you can play tabletop mode games as well.

That being said, as the Switch is about twice the amount of the Lite, you should think about what features are important to you. Since the processing power of the Lite is the same as new Switch consoles or even better than the old ones, you won’t be losing anything either way. The decision mainly lies on how you want to play your games, and if you want a real console experience.

These two platforms are definitely much different from each other, and if you’re looking for a fully-featured home console, the Lite will probably not be for you. Without the ability to hook up to a TV, the Lite is just a handheld that allows you to play Switch games.

That being said, if you really want a way to play these games while staying on a budget, the Switch Lite is more than enough of a way to do this. Even with its smaller screen size, the display quality, color and brightness is the same as the original Switch. This smaller and sleeker design also makes it much easier to use while you’re out in public.

If you prefer the handheld experience, and the ability to use the Switch on the go, the Switch Lite is perfect for you. And, as far as handheld systems go, the Lite is one of the best from Nintendo and on the market overall.