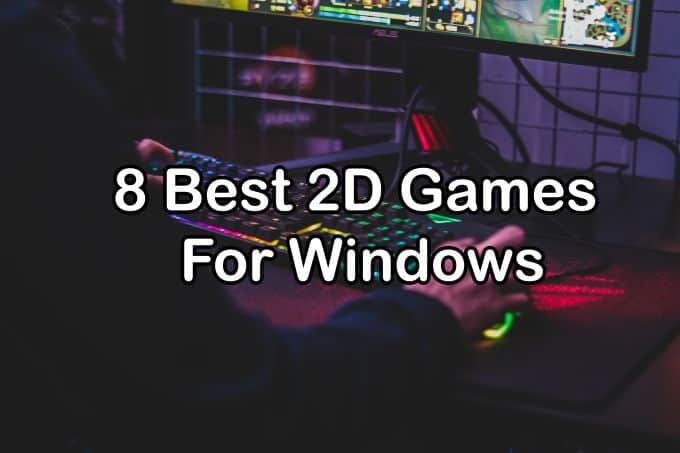 Video game companies are always competing to come out with the latest and greatest in graphic technology. Every year, more and more advances are made in realistic, high-resolution 3D graphics. But, sometimes, maybe you want something just a little bit more simple.

Some of the best games created were from the 2D era, and many game developers seek to continue this type of game design. Many of these games prove that pixelated, 2D graphics can look just as eye-pleasing, if not more at times, than their 3D counterparts.

If you’re missing the days of 2D gameplay, you can find lots of amazing modern games for Windows 10 that will fill this gap. Here are some of the best 2D games you can play right now.

This game is a casual simulation RPG where you’re an owner of a farm. You have moved away from city life to Stardew Valley, which is populated with other farmers, store owners and townspeople.

In Stardew Valley, you complete tasks in order to grow your farm. But there are also many other things you can do, such as befriend other characters, complete requests, and explore the valley itself.

If you like more of a slow-paced game, this one has been known to be quite addicting. Not only that, but it has some great, colorful 2D pixel graphics.

This game has most frequently been compared to Minecraft, as it’s very similar in concept. You can explore, craft, mine, and build all within a 2D platform world. You can mine for materials that will allow you to craft tools and other objects for you to use during gameplay.

Another great aspect of the game is that you can play in multiplayer, so you can explore the world with your friends as well. If you enjoy sandbox type games, Terraria will definitely keep you entertained.

When Undertale was released, it was instantly a smash hit for its unique gameplay and storyline. It’s a roleplaying adventure 2D game where instead of killing enemies, you attempt to spare them.

You play as a young child, exploring an entirely underground world to complete certain objectives. The art style is very similar to turn-based RPGs of the past, such as Earthbound, with just as similar mechanics. However, it’s also very unique thanks to its original gameplay and the ability to achieve multiple different endings depending on how you play the game.

Starbound is a 2D sci-fi adventure game where you explore a vast world with alien creatures, complete quests, fight enemies, and pretty much do whatever you want. It’s a lot like Terraria, but you may enjoy this game more if you like space environments and sci-fi elements.

You have your own spaceship in the game (which you can customize to your liking) that you can use to travel to different planets and explore. There are many quests for you to complete in order to propel the story forward and further your space expedition.

The goal of the 2D game is pretty evident in the title. You pick a character and scavenge the 2D world for resources in order to build tools, a fire, and make sure you don’t go hungry. The game cycles through daytime and nighttime, and during the night you’ll want to be sure you’ve gathered enough during the day to make it through.

The original game, Don’t Starve, is for single-player gameplay. Don’t Starve Together is the same game, yet made so that you can brave the unpredictable in-game world with your friends. The world is also randomly generated every time you start a new game, so you get an entirely new experience every time you play.

6. Ori and the Blind Forest

This puzzle platformer game is absolutely beautiful. It’s also widely renowned for its plotline, gameplay elements, and music score. It won’t take much for you to become immersed in this game’s world as you venture throughout it, playing as a guardian spirit exploring and restoring a forest.

There are many different elements of the game including combat with enemies, gaining experience and upgrades, and improving skills. All this in a breathtaking 2D landscape.

Need more of a challenge? Cuphead, when first released, was notorious for being an extremely difficult game. Yet it makes up for whatever frustration it may cause you with a uniquely charming art style and atmosphere.

Greatly inspired by old-time cartoons, you play as two brothers, Cuphead and Mugman, and encounter countless bosses as you move throughout the shoot-em-up style levels. The difficulty level of each boss varies and you’ll find each battle to be distinct from the last. If you’re finding it too hard on your own, you also have the ability to play with a friend as you each control one of the brothers.

Side-scrolling platformer games have been a classic for a while, so much so that new iterations of the genre are still being produced. Shovel Knight is an especially good 2D game, going back to an 8-bit art style much like the real classics.

You play through the story as a knight, fighting through each platforming level to defeat enemies and collect treasures. You can also upgrade your health, armor, and equipment with the money you earn throughout each level. The game reached immense critical acclaim for its design and style, being such a refreshing take on the genre. It even won multiple Best Game of the Year awards for 2014.