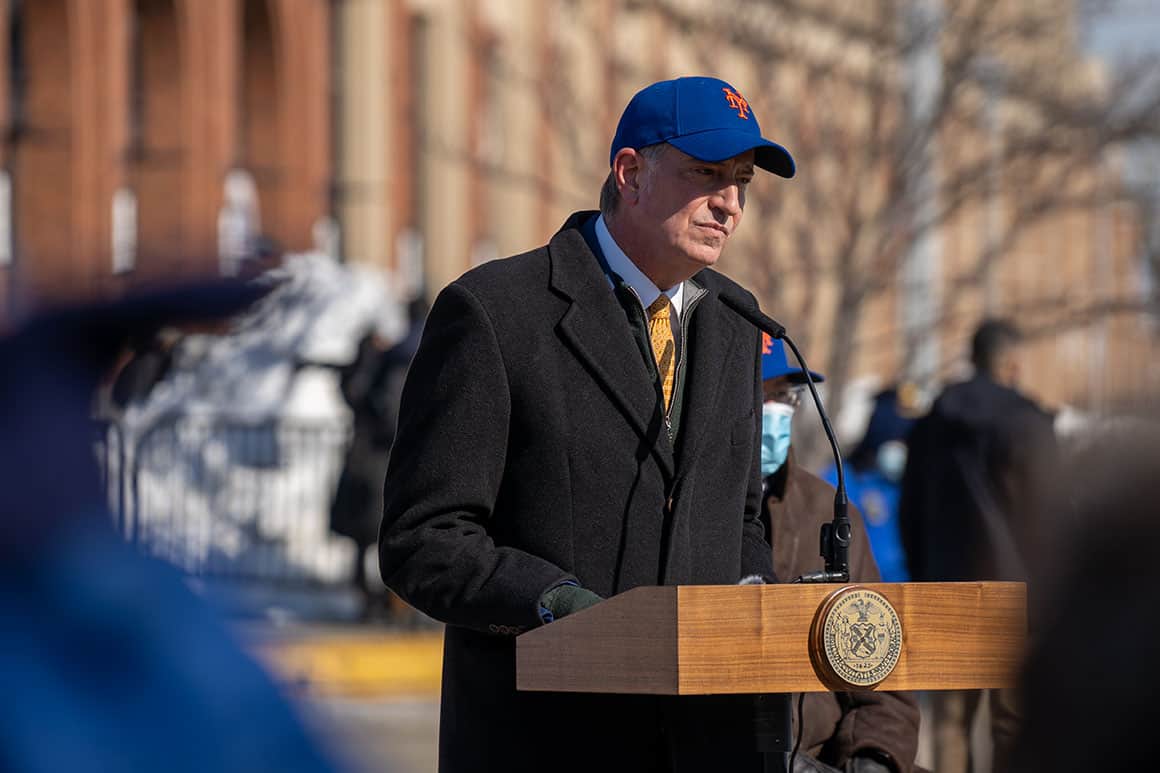 NEW YORK — Mayor Bill de Blasio took a reprieve from dealing with the pandemic one evening last week to turn his attention to local politics.

Worried about keeping his legacy intact, the outgoing mayor convened a meeting of three labor leaders to discuss the race to replace him and air concerns about the potential damage a pro-business candidate would do to the city, several people familiar with the closed-door discussion told POLITICO.

De Blasio hosted the presidents of District Council 37, the Hotel Trades Council and 32BJ SEIU — unions he counts as allies — at his Gracie Mansion residence last Wednesday evening for a long discussion about the state of the race and the future of the city, the people said.

The outgoing mayor, whose term ends on Dec. 31, did not endorse or admonish any of the Democrats seeking his job ahead of the June primary, but made clear he wants the next mayor to continue his record of expanding pre-kindergarten and affordable housing and requiring building retrofits to cut emissions.

De Blasio, a political operative by trade, also expressed a preference for Brooklyn Borough President Eric Adams, questioned the veracity of Andrew Yang’s healthy lead in the polls and asked the union presidents if they would join forces in the race, the people said.

“He said he liked Eric’s story,” said one person, referring to the biography Adams frequently shares on the campaign trail: The Black son of a single mother who grew up in poverty and was beaten by police officers as a teenager before becoming a cop himself. Adams and de Blasio share a political base in Central Brooklyn and the borough president is one of the few politicians who has avoided piling on the mayor during the low points of his tenure.

De Blasio has publicly said he has not decided who to endorse. In a statement, his spokesman Bill Neidhardt simply said, “The mayor and union leaders, who are close friends, joined to talk about the future of the labor movement in New York City and the need to see progressive policies for years to come.”

The mayor did not openly disparage Yang, but questioned his frontrunner status in a poll commissioned by Yang’s team, the people said. A subsequent, independent survey confirmed Yang is in the lead among likely Democratic voters.

Several people familiar with de Blasio’s thinking have told POLITICO recently that the mayor is hesitant about Yang, a private-sector political outsider who presents a stark ideological and stylistic contrast. One said the mayor is wary of Yang’s ties to advisers of former mayor Mike Bloomberg.

And while de Blasio has a particularly hostile relationship with one of the frontrunners in the race, City Comptroller Scott Stringer, he said he would prefer Stringer to “a Bloomberg-like type that would undo or would regress the city back 10, 12 years,” one person said, recounting the mayor’s remarks.

He offered measured support for Maya Wiley, his former attorney in City Hall who is also running, but expressed skepticism about her chances of winning the primary, the people familiar with the meeting said.

Those interviewed by POLITICO asked for anonymity to speak freely about a private meeting.

The labor leaders —  who wore masks, sat at a distance and at times were unsure about the exact purpose of the meeting — told de Blasio they have not decided who to endorse and are unlikely to unite behind one candidate.

He reminisced about his own come-from-behind victory in 2013, and reminded those in attendance his first-place status was not cemented until the month before the primary that year.

Chris Coffey, Yang’s co-campaign manager, said “a Yang administration would be a clean break from the past eight years of missed opportunities and insider politics. It’s time for a change.”