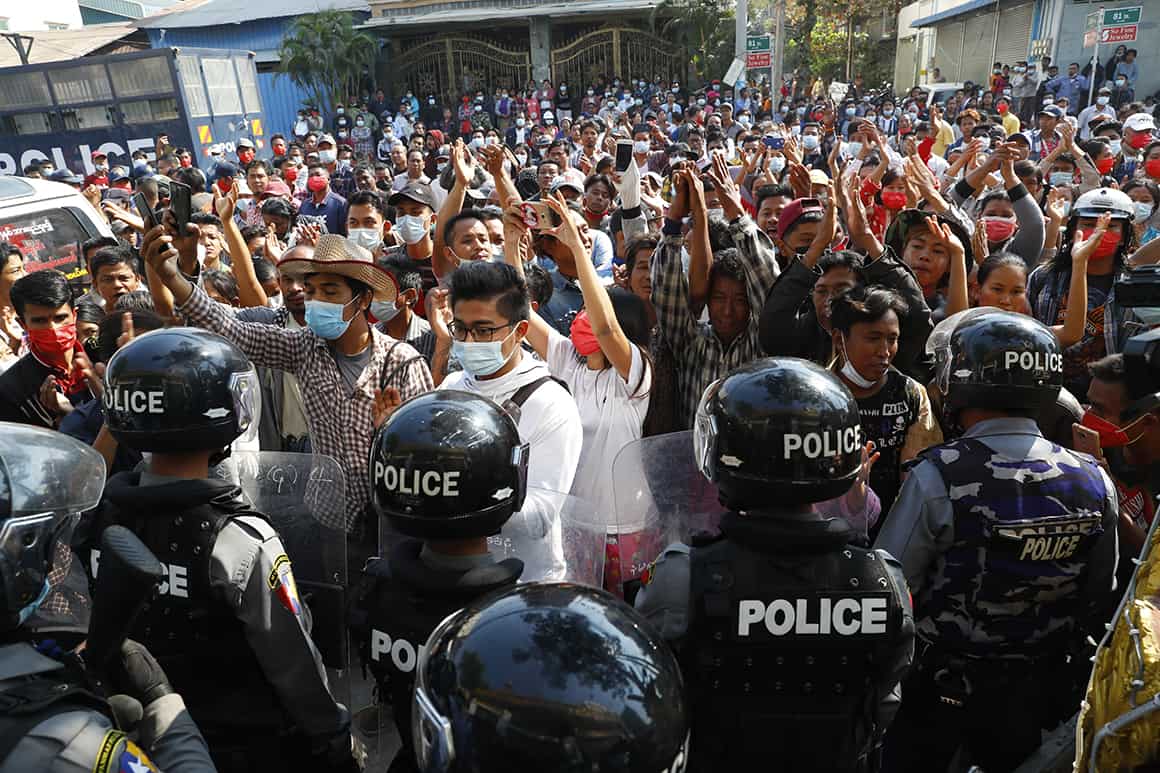 YANGON, Myanmar — Security forces in Myanmar pointed guns toward anti-coup protesters and attacked them with sticks on Monday, seeking to quell the large-scale demonstrations calling for the military junta that seized power earlier this month to reinstate the elected government.

More than 1,000 protesters rallied in front of the Myanmar Economic Bank in Mandalay, the country’s second-largest city, when at least 10 trucks full of soldiers and police arrived and immediately started firing slingshots toward the protesters, according to a photographer who witnessed the events.

The soldiers and police then attacked the protesters with sticks, and police could be seen aiming long guns into the air amid sounds that resembled gunfire. Local media reported that rubber bullets were also fired into the crowd, and that a few people were injured.

Police were also seen pointing guns toward the protesters.

In the capital, Naypyitaw, protesters gathered outside a police station demanding the release of a group of high school students who were detained while joining in anti-coup activities.

One student who managed to escape told reporters that the pupils — thought to range in age from 13 to 16 — were demonstrating peacefully when a line of riot police suddenly arrived and began arresting them. It wasn’t clear exactly how many students were rounded up, but estimates put the figure at between 20 and 40.

Earlier Monday, Myanmar’s military leaders extended their detention of deposed leader Aung San Suu Kyi, whose remand was set to expire and whose freedom is a key demand of the crowds of people continuing to protest the Feb. 1 coup.

Suu Kyi will now be remanded until Feb. 17, when she will likely appear in court by videoconference, according to Khin Maung Zaw, a lawyer asked by Suu Kyi’s party to represent her. The Nobel laureate remains under house arrest on a minor charge of possessing unregistered imported walkie-talkies.

Suu Kyi’s extended detention is likely to further inflame tensions between the military and the protesters who have taken to the streets of cities across the Southeast Asian nation seeking the return of the government they elected.

Protesters continued to gather across Myanmar on Monday, following a night in which authorities cut the country’s internet access and increased the security presence in major cities seeking to curtail demonstrations. 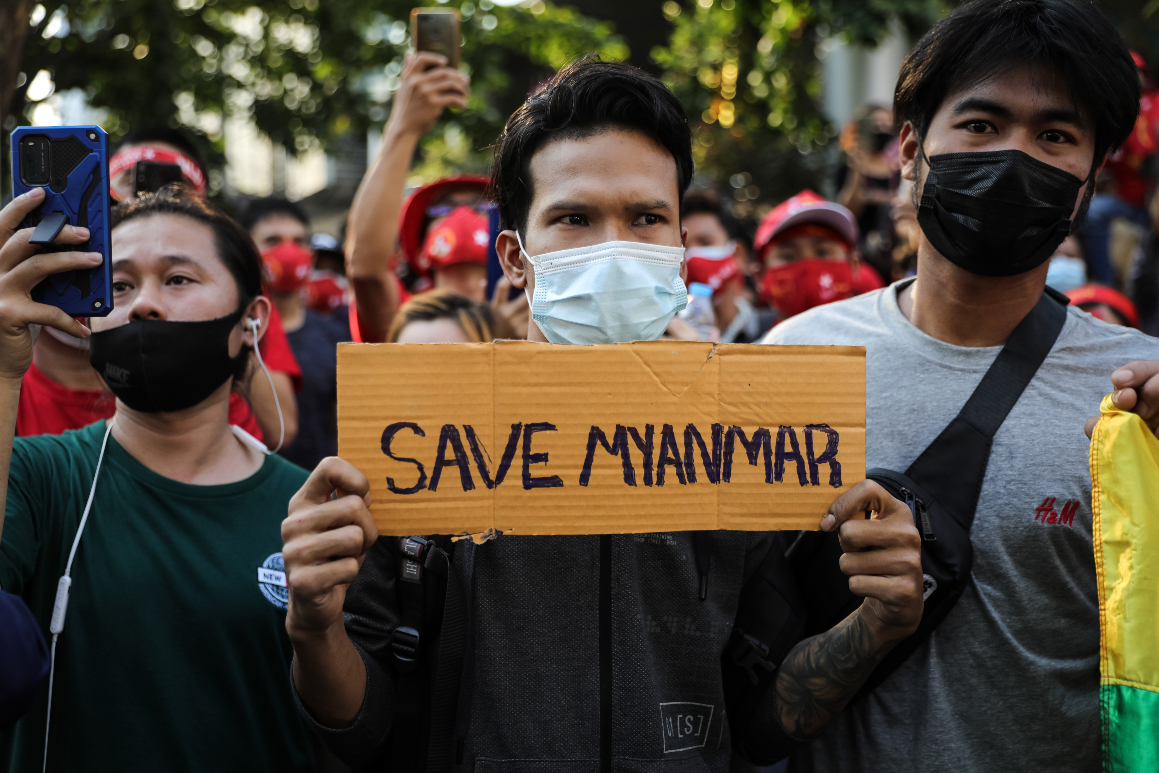 Thousands of engineers marched on the streets of Mandalay chanting and holding signs that read: “Free our leader,” “Who stands with justice?” and “Stop arresting people illegally at midnight.”

In Yangon, the country’s most populous city, fewer protesters gathered on Monday due to the loss of the internet and reports of military vehicles on the streets. Nevertheless, more than 1,000 anti-coup demonstrators were outside the Central Bank of Myanmar building, where there were also military trucks full of soldiers, riot police, water cannon trucks and armored personnel carriers.

Demonstrators carried placards that read “#SupportCDM #SaveMyanmar.” CDM refers to the civil disobedience movement that has seen doctors, engineers and others in Myanmar refuse to work until the military releases elected political leaders and returns the country to civilian rule.

Some protesters posed for photographs in front of military vehicles while holding red signs that read “Join in CDM.”

When the military seized power, it detained Suu Kyi and members of her government and prevented recently elected lawmakers from opening a new session of Parliament. The junta, led by Senior Gen. Min Aung Hlaing, said it stepped in because the government failed to properly investigate allegations of fraud in last year’s election, which Suu Kyi’s National League for Democracy party won in a landslide. The state election commission refuted that contention, saying there is no evidence to support it.

The military justified its move by citing a clause in the 2008 constitution, implemented during military rule, that says in cases of national emergency, the government’s executive, legislative and judicial powers can be handed to the military commander-in-chief. 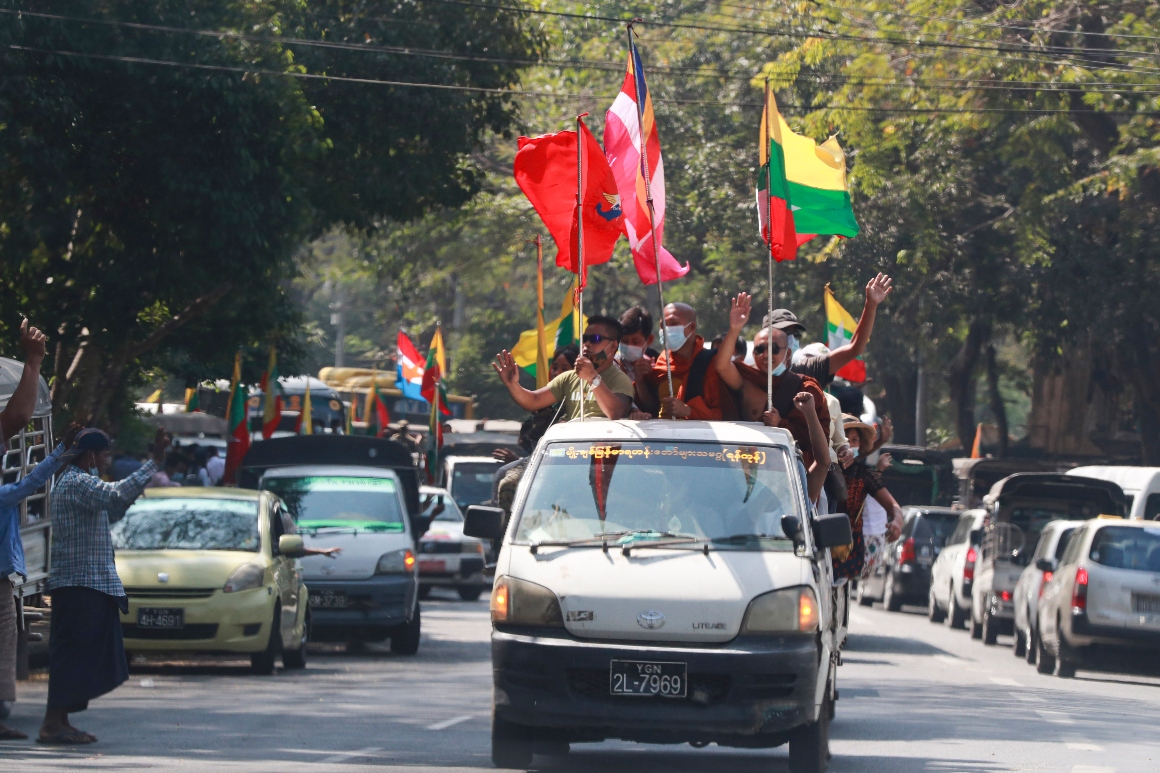 It is just one of many parts of the charter that ensured the military could maintain ultimate control over the country it ruled for 50 years following a 1962 coup. The military is allowed to appoint its members to 25% of seats in Parliament and it controls several key ministries involved in security and defense.

An order on Sunday that appeared to be from the Ministry of Transport and Communications told mobile phone service providers to shut down internet connections from 1 a.m. to 9 a.m. Monday. It circulated widely on social media, as did a notice said to be from service provider Oredoo Myanmar containing the same details.

On Sunday, ambassadors from the United States and Canada and 12 European nations called on Myanmar’s security forces to refrain from violence against those “protesting the overthrow of their legitimate government.”

They condemned the arrests of political leaders and activists as well as the military’s interference with communications.

“We support the people of Myanmar in their quest for democracy, freedom, peace, and prosperity,” they said in a joint statement issued late Sunday night. “The world is watching.”

PrevPreviousCNN’s Berman: No ‘Profile in Courage’ for Nikki Haley’s Trump Critique, She’s a ‘Weathervane’
NextCOVID Stress – How to Calm Yourself Down When It All Gets to Be Too MuchNext