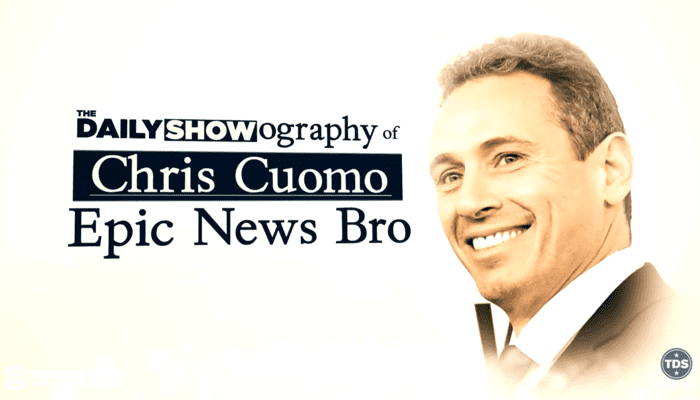 Even though host Trevor Noah was on his summer hiatus, The Daily Show was still pumping out content on their YouTube channel. On Friday, the Comedy Central program made their first foray into using their “Dailyshow-ography” bit to target a liberal. This time they decided to tear into the roid-raging CNN Prime Time host known as Chris “Fredo” Cuomo, or as they dubbed him: the “Epic News Bro” who’s unnecessarily aggressive, parties with the “cream of the B-list,” and only got where he was in life because of his family name.

Normally used to target such conservatives as Senators Mitch McConnell (R-KY), Lindsey Graham (R-SC), and Ted Cruz (R-TX), the same shrill narrator sought to ask some tough questions: “What makes a great journalist? Curiosity, persistence, ignoring your parents when they tell you not to major in communications? Or is the greatest journalist one who simply knows that he’s the greatest and is willing to throw down with anyone who disagrees?”

Noting that Cuomo loved to portray himself as a child of an Italian immigrant family which struggled to make their way in America and as a child who grew up on the rough streets of New York City, the narrator mocked Cuomo’s privileged upbringing:

Further describing him as the “Evil Knievel of Al Rokers” when he was on ABC’s Good Morning America, the narrator quipped about how Cuomo had broken his father, Mario Cuomo’s heart “when he went into journalism. Well, sucks for you dad because little Chris was going to journalism harder than any journalist had ever journalisted before!”

And when it was time for Cuomo to make the switch to CNN, he “perfected” the “skill” of “bullying people like a coach on the Biggest Loser” (Click “expand”):

CUOMO: I want to read your words.

CUOMO: Byron, you don’t get to cut me off. It’s my show. But just listen.

CUOMO: You’ll never drown me out brother. It’s my show and I’m loud as hell, especially when I’m righteous.

CUOMO: You tell me how a president has got time for this bull shit! Are you kidding me?!

RUDY GIULIANI: You are a sellout.

CUOMO: YOU  are telling ME that I’M a sellout?!

CUOMO: I mean, honestly, you sound like an idiot, so there’s not much to say. But Tony, good luck with it. See ya.

After mocking Cuomo’s ridiculous “Let’s get after it” catchphrase, the narrator declared, “And it wasn’t only news he was getting after, it was life.” She then recalled his “shirtless” TikTok videos with is kids, his “partying with the cream of the B-list,” and how “getting after it meant reportedly crashing his classic convertible while drag racing and then fleeing the scene…” (Though she did leave out how he had reportedly been drinking too)

Up next, was his infamous “Fredo” blow up where he threatened to throw a heckler down a flight of stairs for using the name. “Chris stood his ground against Italian stereotyping by threatening to throw a man down the stairs. And he let it be known, ‘you use a mafia movie cliché around him, you gonna wind-up with a horse head in your f[bleep] ing bed,’” the narrator said.

“Things were going great for Chris Cuomo. But then he met the one foe who could throw him down the stairs to his basement: COVID-19,” she warned.

Completely skipping over his well-documented escape from quarantine last year, the program did highlight how his wife Cristina was peddling bogus COVID cures, including bleach, and his hypocrisy on-air about them (Click “expand”):

CUOMO: Now, what I’ve also earned is so much BS on the internet that people are trying to peddle as cures, fake pills, fake tonics [Transition] Vitamin C, vitamin D are great supplements to have, but 10,000, 20,000 units they want you to take of this. [Transition] There’s no proof in any of them. And I think we have to be very careful about people preying on desperation.

NARRATOR: You tell ‘em. Nobody’s going to hawk unproven new-age BS while Chris Cuomo is on the job.

CUOMO: My wife is a wellness person, you know. She runs this business where she’s learning about homeopathic and all these different things. So, she’s given me a ton of stuff. I don’t even ask what it is.

CRISTINA CUOMO: So, our whole effort was to build back his immune system. [Transition] Most importantly, it was the good foods and the herbs, the oxygenated herbs, and the homeopathy. And obviously, the vitamins were really critical for this.

And no roundup of Cuomo’s vileness would be complete without discussing his “Bros before ethics” method of hiding his aid to his disgraced brother, former New York Governor Andrew Cuomo. “It took real strength of character to admit he couldn’t be objective about stuff he had been covering the entire year,” the narrator sarcastically mocked.

Adding: “There were calls for Chris to resign too. But that’s just not who he is. Chris Cuomo gets after it. Whether ‘it’ is ratings or fame or abs or avoiding accountability (…) No matter what happens, you can’t stop this beast, because he is Chris “Mother Fredo” Cuomo: Epic News Bro.”

To read the transcript of the video, click here.

PrevPreviousInternet safety tips for kids and teens: A comprehensive guide for the modern parent
NextSelf-Care Activities to Reduce Burnout at WorkNext