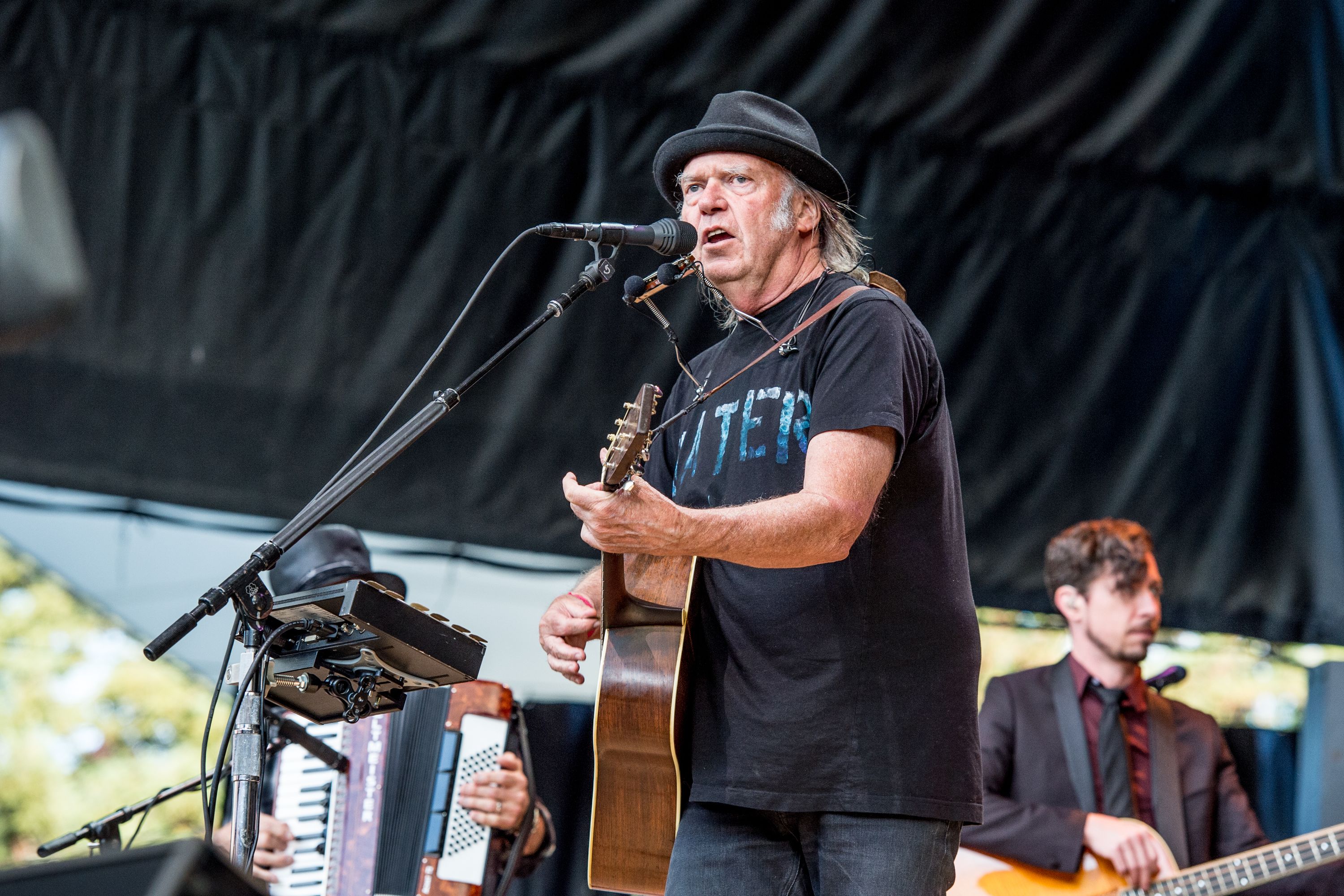 The great uprising against comedian Joe Rogan led by a small posse of over-the-hill rockers has ended in surrender before it really got started. Rogan, whose Joe Rogan Experience podcast on Spotify attracts one of the largest audience in the medium (an estimated 11 million listeners), bowed to Neil Young and Joni Mitchell in a Sunday evening video communique in which he apologized for being Joe Rogan, promised a more conscientious and balanced approach to his future shows, and Spotify likewise promised higher Covid-19 standards. “I am going to do my best in the future to balance things out. I’m going to do my best,” he said. “I pissed you off, I’m sorry.”

Last week, Young and Mitchell, as well as lesser light Nils Lofgren, pulled their music from Spotify to protest the half-baked declarations on vaccines and the pandemic made by Rogan and his guests. “You can have Rogan or Young. Not both,” Young had informed Spotify. While Rogan’s conciliatory message might not persuade Young and company to return to Spotify, it will likely shift the criticisms of his free-form show — which is as likely to cover martial arts, evolutionary psychology, Hollywood, politics, drugs, the Dark Web or whatever fire is currently burning in Alex Jones’ fevered mind as it is to offer commentary on Covid-19 — from boiling to simmer.

What Rogan’s call for a cease-fire won’t end is the calls for the censorship or “deplatforming” of sub-orthodox voices like Rogan and other controversialists. To date, no notable rock ‘n’ roller has fired at Substack for hosting Covid outliers like Joseph Mercola, Alex Berenson and Steve Kirsch, but it’s only a matter of time. Campaigns like Young’s against Rogan — either he goes or I go — are defensible, of course. Nobody should be in a position to tell Young what the proper home for his music is. Nobody should tell you that you have no right to cancel your Spotify account (or cancel your daily newspaper) as an act of protest. But Young’s public and messianic urge to mute a speaker, his attempt to protect other people from speech he deems harmful, cuts against his own career-long devotion to free speech.

Young has long made protest against the status quo his trademark. He decried the Kent State massacre of 1970 (“Ohio”), he condemned racism (“Southern Man”), he celebrated the joy of illegal marijuana (“Homegrown”), and at one misguided point, he erected his own monument to misinformation, the anti-GMO concept album The Monsanto Years (2015). In 2001, after 9/11, he seemed ready to trade civil liberties for the illusion of safety when he backed the passage of the Patriot Act. “Even though we have to protect freedoms, it seems we’re going to have to relinquish some of our freedoms for a short period of time,” Billboard quoted him saying at an award ceremony. What’s unsettling about Young’s current crusade is the one-time free speech warrior has decided to impede another speaker’s access to speak in the marketplace and, by extension, limited your access to hear them. A generation ago, somebody should remind Neil, it was Washington insiders like Tipper Gore and her Parents Music Resource Center who were stifling pop music expression with their Comstockery.

The good news about Young’s move to marginalize Rogan is that it won’t work. That’s magical thinking. Even in our times, when tolerance for speech that’s considered misinformation or offensive is reaching a new dipping point, censorious blow-ups like Young’s accomplish little. The markets for speech are too wide and too decentralized for any boycott to disturb. Rush Limbaugh easily survived an organized boycott against him in 2012 after he called a college student a “slut.” Tucker Carlson has sailed his ship of foolishness past a couple similar boycotts over the years to no lasting damage. Laura Ingraham, too, has outlasted the boycotters, as has Carlson and Ingraham’s network, the Fox News Channel, whose advertisers have been targeted by the boycotters.

You don’t have to be a fan of Rogan’s 12-year-old show (I’m not) or a Fox viewer (I mainly watch out of professional duty) to view the calls for boycott or de-platforming as attempts to suppress controversy and dissent in favor of samethink. By trying to mute Rogan, Young and his ilk seem to be saying that some ideas — even the stupid ones about vaccines and Covid that Rogan has endorsed — are so powerful that they will displace “good” public health ideas and that Rogan is guilty of inspiring Covid deaths. This, of course, is preposterous. About 85 percent of adult Americans have taken at least one dose of the vaccine, since it became available just a year ago. The idea that Rogan has blood on his hands because he entertains doubts about the vaccine is like blaming certain books in school libraries for convincing kids to have sex, change their gender, take drugs or be racist. Young and the book banners don’t share a lot — his battle is against one speaker — but the spirit of his campaign is uncomfortably close to the banners because both amount to restricting expression in favor of the ideas they prefer. There is no national medical emergency that requires a Neil Young power chord to shatter it.

The pathologies of bunk can be found in almost every popular medium in existence. If we’re going to purify the web by chasing off vaccine cranks, dissidents, deadenders and refuseniks — whatever you want to call them — shouldn’t we also purge daily newspapers of astrology columns, which espouse potentially harmful nonsense, too? How about interrupting flat-earth discussions, the alternative medicine crowd, the Myers-Briggs test, homeopathy and other manifestations of the scientific fringe? This is both bad news and good news. It’s bad news because you’d like to think a greater number of people in an educated society would abandon easily falsifiable ways of thinking over time. But it’s also good news because it demonstrates that, in general, our devotion to public discourse supersedes our nature to throttle thoughts we vehemently disagree with. Fundamentally, our culture recognizes that free and open debate, with all of its inconveniences, benefits when it allows the free exchange of heretical thoughts, even the nutty vaccine ones Rogan showcases.

The thing about bunk is that often it’s a demand-side phenomenon, not just a supply-side one. The standard human appetite for convenient, reductionist theories tends to soar during times of crisis as people seek easy explanations for the hard problems. Why anybody at this late date would still reject the vaccine is beyond me, but vaccine resistance would persist even if Rogan vanished. How much of the blame can be assigned to Rogan is unknowable, but given that the average age of his largely white and male audience is 24, and younger people tend to resist the ravages of Covid, it can’t be that significant. How many people base their health priorities entirely on a podcast that occasionally discusses Covid? Spotify’s promise to add content advisories to Rogan’s shows that discuss Covid-19 and Rogan’s vow to add medical disclaimers to his show and interview mainstream vaccine sources to counter the controversialists is a good sign, and something he should have done from the beginning.

The unsurprising thing about Young’s move on Rogan is that it will probably lift the fortunes of both men. Young has a new album out that the dispute will promote. Also, according to Billboard, Young will lose about $754,000 a year from sacrificing his Spotify streams but Apple has capitalized on the furor by placing a “Neil Lives Here” opening page on its app, so he’ll probably make up a good part of the difference there. Meanwhile, Sirius XM has announced the return of Young’s station on its dial. The publicity can’t help but drive new listeners to Rogan, too, and encourage casual listeners to return and hear what the man has to say for himself.

It doesn’t always work out this way, but sometimes, just sometimes, attacks on speech only enhance it.

According to Ted Gioia, an artist would have to generate 23 billion streams to earn as much ($100 million) as Spotify is paying Rogan. Send your streams to [email protected]. My email alerts would like to be a podcast when it grows up. My Twitter feed was once a vlog, if you remember those. My RSS feed maintains its allegiance to AM radio.

PrevPreviousAndroid Hotspot Not Working? 10 Things to Try
NextArticle of the month – Issue 7, 2021Next