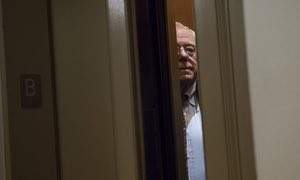 Bernie Sanders strongly condemned the shooting after it came out the suspect had volunteered for his presidential campaign. Photograph: Saul Loeb/AFP/Getty Images

And for a day, at least, the mood in Washington seemed to have changed. At 4pm, the managers of the Republican and Democratic congressional baseball teams appeared together at a joint press conference and vowed that the game at Nationals Park on Thursday would go on. Barton said: It will be play ball tomorrow night at 7.05.

Mike Doyle, the manager of the Democratic team, added: Were not going to let incidents like this change our way of life or daily routines.

The congressmen also had another message. They believed the attack was a consequence of the increasingly toxic political climate between politicians, the press and the public.

Members are not looked at as people any more, Barton said, reflecting on the change since he was first elected in 1985. People think they can come to our town hall meetings and say just the most obnoxious things and well not feel anything personally.

As a first step, Doyle said the Democrats invited Republicans to the Democratic Club for dinner. Barton ribbed him that he would order the most expensive steak on the menu. Doyle shot back: Were Democrats. We dont have steaks. Thats your club.