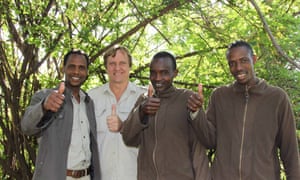 Lotter was a big figure in the international conservation community, having served on the boards of several conservation groups and was the Vice President of the International Ranger Federation. The news of his death has sent the community into mourning. Wayne was one of Africas leading and most committed conservationists. He had over two decades worth of experience in wildlife management and conservation, and can be credited as the driving force behind ending the unscrupulous slaughter of Tanzanias elephants, said Azzedine Downes, CEO of the International Fund for Animal Welfare (IFAW).

Wayne devoted his life to Africas wildlife. From working as a ranger in his native South Africa as a young man to leading the charge against poaching in Tanzania, Wayne cared deeply about the people and animals that populate this world, read a statement released by the PAMS Foundation team. Waynes charm, brilliance and eccentric sense of humour gave him the unique ability to make those around him constantly laugh and smile. He died bravely fighting for the cause he was most passionate about.

Wayne leaves behind his wife Inge, daughters Cara Jayne and Tamsin, and parents Vera and Charles Lotter. We all grieve with his family, colleagues and friends. His legacy will continue in our work.

This footnote was added on 18 August 2017. Vulcan, who support this independent editorial series, is also one of the funders for PAMS.