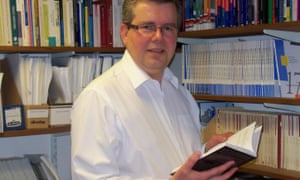 Prof Kevin Featherstone, director of the European Institute at the LSE: The letter reflects a past of a McCarthyite nature

Pro-Brexit academics working in this area are also unhappy with the MPs behaviour. Lee Jones, reader in international politics at Queen Mary University of London, is one of the few openly pro-Brexit academics in his field. During the referendum campaign I said what I wanted and no one tried to shut me up, but I know colleagues elsewhere who have been blanked in the corridors because they voted to leave.

Yet Jones, too, is outraged by Heaton-Harriss investigation. It is really troubling that an MP thinks it is within his remit to start poking his nose into university teaching, he says. Universities are autonomous and politicians have no right to intimidate academics by scrutinising their courses. I have colleagues who are die-hard remainers. But I know what they teach and it is not propaganda.

Chris Bickerton, reader in modern European politics at Cambridge University, and a fellow leave voter agrees. He adds: In my institution there is strong support for academic freedom. I applied for promotion after the referendum and never did I worry that my views on Brexit would affect the results or my promotional prospects. Nor did I feel any institutional pressure to think one way or the other in the runup to the vote itself.

Heaton-Harris did not respond to requests for a comment.