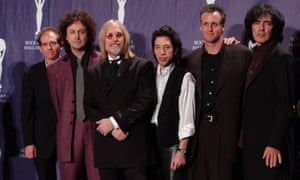 Tom Petty and the Heartbreakers in 2002. Photograph: Ed Betz/AP

Its shocking, crushing news, Bob Dylan told Rolling Stonein a statement. I thought the world of Tom. He was great performer, full of the light, a friend, and Ill never forget him.

Petty also enjoyed solo success but always returned to the Heartbreakers, releasing their final album in 2014. I dont see that I have anything to offer as a solo artist that I couldnt do within the group better, he told the Sun. We get along so well its embarrassing really. Its a love fest!

The band had been on a 40th anniversary tour since April that finished last week at the Hollywood Bowl. In an interview with Rolling Stone in December, he suggested it would probably be his last.

Were all on the backside of our 60s, he said. I have a granddaughter now Id like to see as much as I can. I dont want to spend my life on the road. This tour will take me away for four months. With a little kid, thats a lot of time.

Petty was outspoken in his protection of the rights of artists, taking issue with record companies on a number of occasions about what he believed to be unjust practices. Earlier this year he was named MusiCares person of the year for his career-long interest in defending artists rights as well as for his charitable work with homeless people in Los Angeles.

Throughout his career, he sold more than 80m records worldwide.

Florida-born Petty caught the rocknroll bug after he was introduced by his uncle to Elvis Presley, who was shooting the picture Follow That Dream on location in Florida in 1960.

He said he began working on music in earnest after seeing the Beatles on The Ed Sullivan Show in February 1964.

He would speak of being consumed by rock music since childhood, to the point where his father, whom Petty would later say beat him savagely, thought he was mental.

Awed by the chiming guitars of the Byrds, the melodic genius of the Beatles and the snarling lyrics of Dylan, he was amazed to find that other kids were feeling the same way. Youd go and see some other kid whose hair was long, this was around 65, and go, Wow, theres one like me, he said in 1989. Youd go over and talk and hed say, Ive got a drum set. You do? Great! That was my whole life.

A 2015 biography of the singer, Petty: The Biography, revealed his heroin addiction in the 1990s.

Author Warren Zanes said in an interview with the Washington Post Petty succumbed to the drug because he had encounters with people who did heroin, and he hit a point in his life when he did not know what to do with the pain he was feeling.

Petty also suffered from depression, channelling his pain into 1999s Echo, during which he was also dealing with a divorce. In 2002, he married Dana York and said he had been in therapy for six years to deal with depression.

Its a funny disease because it takes you a long time to really come to terms with the fact that youre sick medically sick, youre not just suddenly going out of your mind, he said at the time.

An initial version of this story said Tom Petty had died, before this was officially confirmed. This was based on erroneous reports. The Guardian apologises for this error

Wire services contributed to this report

PrevPreviousI asked Tinder for my data. It sent me 800 pages of my deepest, darkest secrets – Trending Stuff
Next60,000 nationalists march on Polands independence day – Trending StuffNext