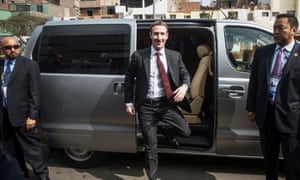 Social media companies have faced increased scrutiny over the past year as critics increasingly link growing political divisions across the globe to the handful of platforms that dominate online discourse.

Many observers attributed the unexpected outcomes of the 2016 US presidential election and Brexit referendum at least in part to the ideological echo chambers created by Facebooks algorithms, as well as the proliferation of fake news, conspiracy mongering, and propaganda alongside legitimate news sources in Facebooks news feeds.

The company only recently acknowledged that it sold advertisements to Russian operatives seeking to sow division among US voters during the 2016 election.

Facebook has also faced significant criticism for its role in amplifying anti-Rohingya propaganda in Myanmar amid suspected ethnic cleansing of the Muslim minority.

Palihapitiya referenced a case from the Indian state of Jharkhand this spring, when false WhatsApp messages warning of a group of kidnappers led to the lynching of seven people. WhatsApp is owned by Facebook.

Thats what were dealing with, Palihapitiya said. Imagine when you take that to the extreme where bad actors can now manipulate large swaths of people to do anything you want. Its just a really, really bad state of affairs.

Facebook responded to Palihapitiyas comments on Tuesday, noting that the former executive had not worked for the company in six years.

When Chamath was at Facebook we were focused on building new social media experiences and growing Facebook around the world, a company spokeswoman, Susan Glick, said in a statement. Facebook was a very different company back then, and as we have grown, we have realized how our responsibilities have grown too. We take our role very seriously and we are working hard to improve.

The company said that it was researching the impact of its products on well-being and noted that the CEO, Mark Zuckerberg, indicated a willingness to decrease profitability to address issues such as foreign interference in elections.