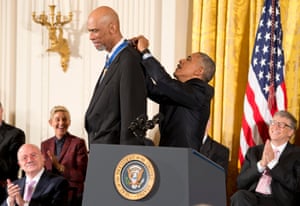 Abdul-Jabbar defines himself as a writer now. As he reflects on his LA Press Club awards he says: To be honoured by other writers is incredible. Im a neophyte. Im a rookie.

He grins when I say hes not doing not too badly for a rookie who has written 13 books, including novels about Mycoft Holmesbrother of Sherlock. Yeah, but I still feel new to it and to get that recognition was wonderful. I was very flattered that the BBC came to interview me about Mycroft because the British are very protective of their culture. Arthur Conan Doyle is beyond an icon. So I was like, Wow, maybe I am doing OK. When I was [an NBA] rookie somebody gave me a complete compilation of Doyles stories. I went from there.

People were amazed because I always used to be reading before a game whether it was Sherlock Holmes or Malcolm X, John Le Carr or James Baldwin. But that was one of the luxuries of being a professional athlete. You get lots of time to read. My team-mates did not read to the same extent but Im a historian and some of the guys had big holes in their knowledge of black history. So I was the librarian for the team.

I tell Abdul-Jabbar about my upcoming interview with Jaylen Brown of the Boston Celtics and how the 21-year-old has the same thirst for reading and knowledge. While enthusiastic about the possibility of meeting Brown when the Celtics next visit LA, Abdul-Jabbar makes a wistful observation of a young sportsmans intellectual curiosity. Hes going to be lonely. Most of the guys are like: Where are we going to party in this town? Where are the babes? So the fact that he has such broader interests is remarkable and wonderful.

Abdul-Jabbar acknowledges that his own bookish nature and self-consciousness about his height, combined with a fierce sense of injustice, made him appear surly and aloof as a player. It also meant he was never offered the head-coach job he desired. They didnt think I could communicate and they didnt take the time to get to know me. But I didnt make it easy for them so some of that falls in my lap absolutely. But its different now. People stop me in the street and want to talk about my articles. Its amazing.

Most of all, in his eighth decade, Kareem Abdul-Jabbar loves to lose myself in my imagination. Its a wonderful place to go when youre old and creaky like me. I see myself working at this pace [writing at least a book a year] but its not like I have the hounds at my heels. Since my career ended Ive been able to have friends and family. My new granddaughter will be three this month. Shes my very first [grandchild] . So my life has expanded in wonderful ways. But, still, we all have so much work to do. The work is a long way from being done.