Dont listen to Gwyneth Paltrow: keep your coffee well away from your rectum 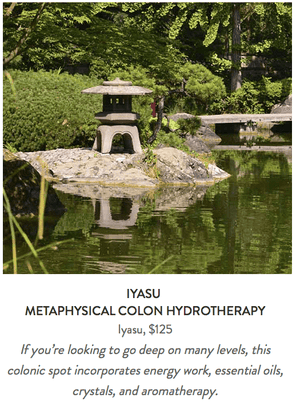 Ha ha, go deep. Nice play on words for a dangerous yet ineffective therapy. An advertisement on Goop.com.

One offers to help if youre looking to go deep on many levels. Ha ha, go deep. Nice play on words for a dangerous yet ineffective therapy. Goop.com is not selling a coffee machine, it is selling a coffee enema-making machine. That, my friends, is a messed-up way to make money. I know the people at Goop will either ignore the inquiries from reporters or release a statement saying the article is a conversation not a promotion and that they included the advice of a board-certified doctor, Dr Alejandro Junger, but any time you lend someone else your platform their ideas are now your ideas. That is why I never let anyone write guest posts for my blog. And lets be real, if you are selling the hardware to shoot coffee up your ass then you are promoting it as a therapy especially as Goop actually called the $135 coffee enema-making machine Dr Jungers pick. I mean come on.

The interview with Junger is filled with information that is unsupported both by the medical literature and by human anatomy and physiology. There is no data to suggest that a colonic helps with the elimination of the waste that is transiting the colon on its way out. That is what bowel movements do. There are no toxins to be cleansed or irrigated. That is fake medicine. A 2011 review on colonics concluded that doctors should advise patients that colon cleansing has no proven benefits and many adverse effects.

The idea that colonics are used in conjunction with a cleanse is beyond ridiculous. Junger tells us via Goop that a cleanse creates some kind of extra sticky mucus that blocks elimination of what needs to be disposed of (I will admit that hurt my brain more than a little). Dr Junger says this cleanse residue is a mucoid plaque, basically some kind of adherent, cleanse-induced super-glue that needs a colonic for removal. He supports this assertion not with published research, but by telling Goops readers to Google mucoid plaque.

No really. That is what he said. Google it. So I did. This is what came up first:

Mucoid plaque (or mucoid cap or rope) is a pseudoscientific term used by some alternative medicine advocates to describe what is claimed to be a combination of allegedly harmful mucus-like material and food residue that they say coats the gastrointestinal tract of most people.

Apparently, the term mucoid plaque was coined by Richard Anderson, who is a naturopath, not a gastroenterologist, so not a doctor who actually looks inside the colon. I looked mucoid plaques up in PubMed. Guess what? Nothing colon-related. There is not one study or even case-report describing this phenomenon. Apparently only doctors who sell cleanses and colonics can see them. I am fairly confident that if some gastroenterologist (actual colon doctor) found some crazy mucus that looked like drool from the alien queen that she or he would have taken pictures and written about it or discussed it at a conference.

If we needed cleanses to live and thus colonics to manage this alien-like mucous residue created by cleanses, how did we ever evolve? Wouldnt we have died out from these mysterious toxins? Wouldnt our rectums be different? Wouldnt we have invented irrigation tubing before the wheel? So many questions.

There is only a side mention in the Goop post of two of the many complications seen with colonics: colon perforation and damage to gastrointestinal bacteria. And as for coffee enemas? While Dr Kelly Brogan, Paltrows Aids-denialist doctor gal pal who is speaking at In Goop Health later this month, is also a huge fan, there is no data to suggest that coffee offers any benefit via the rectal route but there are plenty of reports of coffee enema-induced rectal burns.

So here are the facts. No one needs a cleanse. Ever. There are no waste products left behind in the colon that need removing just because or after a cleanse. If a cleanse did leave gross, adherent hunks of weird mucus then that would be a sign that the cleanse was damaging the colon. You know what creates excess, weird mucous? Irritation and inflammation.

There are serious risks to colonics such as bowel perforation, damaging the intestinal bacteria, abdominal pain, vomiting, electrolyte abnormalities and renal failure. There are also reports of serious infections, air embolisms, colitis, and rectal perforation. If you go to a spa and the equipment is not sterilised, infections can be transmitted via the tubing.

Coffee enemas and colonics offer no health benefit. The biology used to support these therapies is unsound and there can be very real complications. Keep the coffee out of your rectum and in your cup. It is only meant to access your colon from the top.