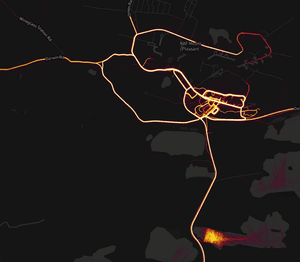 When Strava released the heatmap, an updated version of one it had previously published in 2015, it announced that this update includes six times more data than before in total 1 billion activities from all Strava data through September 2017. Our global heatmap is the largest, richest, and most beautiful dataset of its kind. It is a direct visualisation of Stravas global network of athletes.

Strava demonstrated that the new heatmap was detailed enough to see kiteboarding in Mexico, to track the route of the Camino de Santiago across northern Spain and to see the sea route of the Ironman triathalon in Kona, Hawaii. Perhaps the closest to the current operational security issues that it noted, however, was the layout of the Burning Man festival in the Nevadan desert. The unique pentagonal pattern of Burning Mans pop-up city is forever etched into the Heatmap, thanks to all the runners and cyclists who have used Strava to explore it, the company wrote.