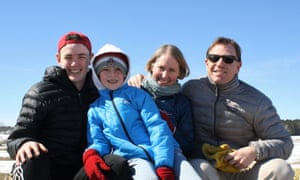 Jeremy Sheaffer and his family. Sheaffer, who is culturally a Christian, cannot legally will his Bay View property to his wife, who is Jewish. Photograph: Jeremy Sheaffer

But the environmental NGO worker says his relationship with the place he calls home base has reached a crisis point.

I have no way to legally will my cottage to my wife or my children, says Sheaffer of his summer home.

Sheaffer, who defines himself as culturally Christian, is married to a Jewish woman who cannot inherit his home because of her religion. Under the existing rules, their two children, aged 11 and 14, themselves sixth-generation Bay Viewers, would also be barred from inheriting their fathers property because of their mixed religious makeup.

Undeniably, religious self-segregation is at the core of the everyday practice of many faiths.

The wish to assemble with like-minded religious folk, maintain tradition and provide a steady Christian perspective in a changing world appears to be at the heart of the arguments levied by Bay View residents who believe the rules should stay intact.

The first amendment prohibits the establishment of a religion by government, but within the same paragraph also provides for the right of people to freely assemble. This could appear confusing in this case.

But Bay View is not simply a Christian club, or a church. While the governing Bay View association enjoys 501(C)(3), or charity, status through an affiliation with the Methodist church, the homes on its land are sold at a profit by individuals on the marketplace. Four percent of all Bay View home sales are directed to association coffers, and current properties are listed between $120,000 and $1m.

In the first half of the 20th century, racially and religiously restrictive covenants (which restricted home sales to specific groups) were created not just to maintain cultural hegemony in predominantly white, Protestant American neighborhoods, but also to protect the financial value of houses. This was based on the government-backed, racist idea that the influx of non-whites would bring property value down.

Racially restrictive covenants were ruled unenforceable by the supreme court in 1948, almost exactly 70 years ago, kicking off an era of civil rights legal change.

But should religious restrictive covenant be interpreted any differently?

Racist roots in the midwest

Historically, religious exclusion has repeatedly gone hand-in-hand with racial exclusion in the US. It is difficult to know what the exact motivations of voting board members were in the 1940s when the Christian requirement was first introduced.

What was first uncovered through archival research by the then Bay View member David Krause is that through a series of calculated tweaks in bylaws between 1942 and 1947, the board, led by a lawyer from Indiana, seemingly violated its own articles of association and introduced new membership requirements, stipulating that members should be of the white race and the Christian persuasion.

Ralph Jernegan, the lawyer leading the charge, doggedly worked over five years to have the Christian-only and white-only clauses written into Bay View rules. Jernegan headed his own law practice and was a prominent member of his Indiana community of Mishawaka.

Matt Pehl, a professor of history at Augustana University, says he is not surprised to hear about the introduction of such policies in Bay View during this time. Racist as well as anti-Jewish and anti-Catholic viewpoints were espoused openly by respected members of the community throughout the midwest, he says.

Indiana as well as Michigan were hotbeds for the Ku Klux Klan starting in the 1920s, he says, and Henry Ford, the great local industrialist, was a renowned antisemite.

Jernegans community, Mishawaka, was home to a Ku Klux Klan chapter starting in 1927. At the very least, this means that Jernegan lived ina cultural context where, as Pehl puts it, KKK beliefs and concerns were widely shared and strongly endorsed.

As some members in the 1940s were fighting to make Bay View more closed, others were putting time and effort into helping Jewish Europeans escape and emigrate to the US.

Glenn Stevens, still speaking to me on his porch, when challenged by his friend Sophie McGee about the racial component of the original exclusionary bylaw, responds that history corrects those kinds of wrongdoings, separating out the two forms of exclusion as falling on a right and a wrong side.

Nevertheless, documents from the time reveal a spirit of white, Protestant safeguarding. Employees or servants of all backgrounds were allowed to stay, but anybody else not fitting the white, Christian stipulations was given one night before being sent on their way.

Sheaffer, who now faces a conundrum based on his own immediate familys mixed religious makeup, says he always knew about the rules excluding non-Christians but never imagined they would be upheld.

Everyone knew about it. It was viewed as one of those arcane laws put on the books way back when. I think there was a sense that it would just take care of itself.

Dick Crossland, a retired consultant who has been a leading voice for the preservation of membership rules, says he is saddened by the way in which the opposing group has portrayed the association and its board as bigoted.

We accept anyone that wants to join the same way that Christ accepts anyone as Christian. We dont discriminate against anything that you cant change, he says.

The debate has been hurting the community, says Crossland, who added he would have been willing to work on a legacy solution for Sheaffers familys case but not for the broader public.

Crossland says he has visited other Chautauquas that have opened up to non-Christians, and such communities have suffered as a result, with increasing numbers of houses purchased as rentals, resulting ina more transient community that frays its fundamental makeup.

Its always been some place apart, says Crossland, who is opposed to removing the core foundation.

There are a lot of other places where if you want a more secular resort, a place that looks more like the United Nations, then God bless you if you want to go.

Mandela Sheaffer, Jeremy Sheaffers nephew, 26, has only fond memories of growing up in Bay View. Time stops in Bay View. Everything you go back to is the same. Its like a time capsule.

But as hes grown older, he says, its become harder to digest the exclusion of non-Christians by the community. As a biracial kid, Sheaffer was one of the very few non-white children to attend Bay Views campus every year.

Well aware that up until the late 1950s he wouldnt have been allowed to stay there, Sheaffer says even if they got rid of the white-only policy a while ago, it is no coincidence the community has remained almost entirely white.

Tisa Wenger, a professor of American religious history at Yale University, explains that it is difficult to tease out the religious and racial components of this case.

She says much of the mid-century history of Bay View matches national trends, with racial segregation ending and white people doubling down on religious restrictions and creating private organizations in which they could control membership intake.

They dont have to be Trump voters to be wanting to protect a certain enclave. A lot of white Americans are deliberately blind to this, she says.

Wenger explains that research for her recent book on religious freedom revealed that appeals made by white American Christians for religious liberty often end up being ways in which to advance white privilege.

William Crawford, a professor and third-generation Bay Viewer in his 50s and who became a member so that his children could benefit, says he is embarrassed about the membership policy.

He says Bay Views dirty little secret is that many members and their families are not actually practicing Christians. This is confirmed to me by other members as I visit Bay View.

Crawford speculates that many people like the idea of tradition more than they care about their neighbors being proven active Christians. He ponders whether what is going on is not just a spiritual issue, its a socioeconomic issue.

The cottages used to be cheap. It wasnt a place for wealthy people. Thats changed. Now it is cost-prohibitive to be up there. You are not allowed to be up there past a certain time in the year. To keep a second home is not feasible for most people.

Sitting in front of his old piano, Glenn Stevens, who does not believe in changing policies, bursts into song. The melody is Smiles, which I am later told was written in Bay View. Sophie McGee his lifelong friend who wants to change the policy spontaneously joins in the singing.

The song sounds almost painfully nostalgic, and for a moment, it feels like the three of us are transported to another time.

Months after I first talk to him, as Michigan has been covered in a thick blanket of snow, Jeremy Sheaffer calls me in early February. He tells me his parents have both died since we last spoke, making the issue of whether he should maintain ties (and ownership of property) in Bay View ever more pressing.

He reminds me of a public letter his mother wrote, aged 87, this July during what turned out to be her last summer. The letter reads:

One hundred summers have come and gone and I, now at 87, know firsthand that change does indeed come as surely as the seasons and twice as quick.

Change and Bay View have been the two constants in my family for a century. So, the Bay View Association membership question, for me, comes down to a very simple question: if my grandchildren, Earl and Anna Childs great-grandchildren, can be denied membership based solely on their religion or lack of religion, isnt something wrong?