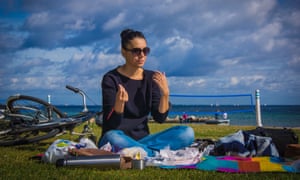 Copenhagen launched its stress clinics after a survey showed that 23% of its residents felt stressed a lot of the time. The nine-week course focuses on group discussions of shared problems and solutions and mindfulness training. Those who come can also get subsidised yoga and other classes, and they are encouraged to keep in touch with their group afterwards. Ithas been abig success, with almost a 30% drop in the symptoms of thoseattending.

Surveys throw up contradictory findings all the time. Although nearly a quarter of Copenhageners say they are stressed, the city still sits at the top of that UN happiness index.

This may be to do with the reflective nature of the question. Wiking explains that it is intended to measure what he calls the cognitive dimension of happiness, not how you feel right now. Its where you essentially take a step back and evaluate your life, he says. So the question being used is: imagine the best possible life you could lead and the worst possible life you could lead on a scale from 10 to zero. Where do you stand on that?

The answer, for Danes, is 7.57. That is an average over the years 2013-17. Switzerland is a close second and Norway third. Other Scandinavian countries come not farbehind. The UK is 24th, scoring 6.79, below Australia, the US and Ireland, as well as Costa Rica, PuertoRico, Mexico, Oman and theUnited Arab Emirates.

Copenhagen comes first in a country where people can pay as much as 60% of their income in taxes. Wiking believes that may be part of the reason. The Nordic countries, he says, have simply been better at converting wealth into wellbeing. We invest in quality of life. Yes, if I paid lower taxes I could afford a bigger car, but thats not going to bring me happiness. What brings me happiness is knowing that everybody I love andcare for is taken care of. Thats the key to understanding Scandinavian happiness. In a sense, I feel the Scandinavian model has removed the price tag on happiness.

In this highly taxed society, education from daycare for babies, to university is free, and students get a very generous monthly grant togo with it. Hospital treatment is free and the municipalities such as Copenhagen get heavily fined for every day that an older person stays in a hospital ward when they could go home, so bed-blocking is out of the question. Daily care for the elderly at home is also free. It is, says Welling, a young city, so has not yet had to deal with the scale of an expanding elderly population that the NHS struggles to support.

That may come. Copenhageners used to move out of the city when they retired. Now they are increasingly choosing to stay with their families and enjoy the city. Property prices are rising as a result and the economic, social and health gap between the better and worse off is widening, as in so many countries. Somehow, though, you cant help thinking Copenhagen will manage it much better than most.