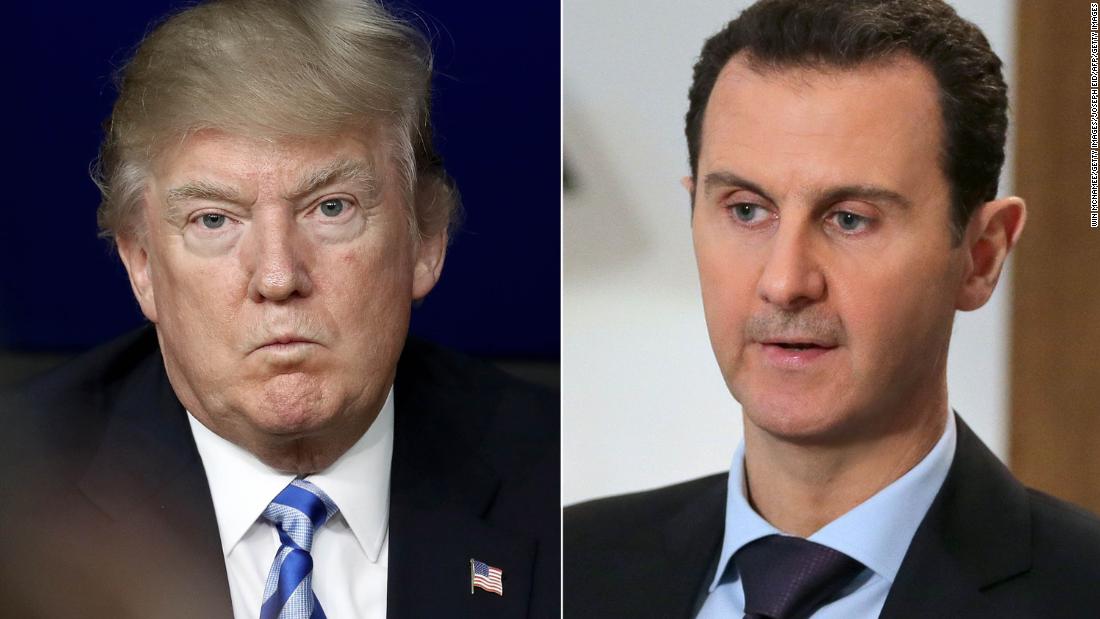 Washington (CNN)The US, UK and France launched strikes against targets at three sites in Syria in the early hours of Saturday morning, following a week of threats of retaliation for an alleged chemical weapons attack on civilians in the Damascus enclave of Douma.

The strikes were launched at 9 p.m. ET, as most of Europe and the Middle East was shrouded in darkness. Photos showed missiles streaking over the night sky in Syria, and witnesses told CNN they heard explosions in the capital Damascus as Trump was making his address.

The Syrian Armed Forces said in a statement that 110 missiles were fired on Syrian targets and that the country’s defense systems “intercepted most of the missiles, but some hit targets including the Research Center in Barzeh.”

Russia’s news agency TASS reported that none of the missiles fired by the three western nations struck areas near its naval and air bases in Syria. Those bases come under the protection of Russian air defense units.

US defense and military officials told CNN that aircraft, including B-1 bombers, and at least three US Navy warship based in the Red Sea, participated in the strikes. The USS Monterey, a Ticonderoga-class guided-missile cruiser, launched Tomahawk missiles as part of the strike, according to a Pentagon release.

Gen. Joseph Dunford, chairman of the US Joint Chiefs of Staff, told reporters at a Pentagon briefing that the first allied strike targeted a scientific research center in greater Damascus involved in the development and production of chemical weapons.

“Important infrastructure was destroyed which will result in a setback for the Syrian regime. They will lose years of research and development, storage and equipment,” Dunford said.

Trump said that he decided to take action because last weekend’s action by Assad “was a significant attack against his own people,” and “not the actions of a man, they are crimes of a monster instead.”

Trump said the strikes were in coordination with France and the United Kingdom, adding that the purpose of the campaign is to “establish a strong deterrent against the production, spread and use of chemical weapons.”

“The combined American, British and French response to these atrocities will integrate all instruments of our national power: military, economic and diplomatic,” Trump said.

UK Prime Minister Theresa May said in a statement that she “authorized British armed forces to conduct coordinated and targeted strikes to degrade the Syrian Regime’s chemical weapons capability and deter their use.”

“The UK element of the carefully coordinated joint action was contributed by four Royal Air Force Tornado GR4s,” a statement from the UK Ministry of Defense said. “They launched Storm Shadow missiles at a military facility — a former missile base — some 15 miles west of Homs, where the regime is assessed to keep chemical weapon precursors stockpiled in breach of Syria’s obligations under the Chemical Weapons Convention.”

French President Emmanuel Macron said he “ordered the French armed forces to intervene” after a “red line set by France” on the use of chemical weapons had been crossed.

The office of the French President posted a video of a squadron of French military jets taking off to launch their part of the strikes.

A senior administration official said “what you’ve seen tonight is not the end of the US response. They have built a lot of flexibility into the plan to allow for further strikes based on what they’ve hit tonight.”

However, Trump added the US “does not seek an indefinite presence in Syria.” He has previously told his national security team he wants US troops to exit Syria within six months.

Russian Foreign Ministry spokeswoman Maria Zakharova said the US strikes hit when the country “finally” had a chance at peace, she posted on Facebook Saturday.

“One must be really exceptional to strike Syria’s capital when the country finally got a chance for a peaceful future,” she wrote.

The Russian Embassy in Washington tweeted a statement attributed to Ambassador Anatoly Antonov that said “our warnings have been left unheard.”

“A pre-designed scenario is being implemented. Again, we are being threatened. We warned that such actions will not be left without consequences. All responsibility for them rests with Washington, London and Paris,” Antonov said.

Trump earlier criticized Russia’s support of the Syrian regime saying “Russia must decide if it will continue down this dark path,” adding Russia had failed in its 2013 promise to eliminate Syria’s chemical weapons.

Part of the calculation this week has also been gaming out how Russia will respond.

“We are watching what Russians do in the next 24 hours,” the official said, adding that there will be intelligence collection to see what Russians are up to in the wake of the strikes, such as turning on their systems or talking about retaliating.

Joint Chiefs Chairman Dunford said the US “specifically identified” targets to “mitigate the risk of Russian forces being involved” and that the normal communication line to avoid problems in the airspace over Syria was used in the run up to the strike.

“We used the normal deconfliction channel to deconflict airspace, we did not coordinate targets,” Dunford said.

“We do not seek confrontation and we refuse any possibility of military escalation and that is the reason why, with our allies, we have insured that the Russians were warned beforehand,” she said.

An Israeli official told CNN that the strikes enforced the red line drawn by President Trump last year. “Syria continues to engage in and provide a base for murderous actions, including those of Iran, that put its territory, its forces and its leadership at risk,” the official said.