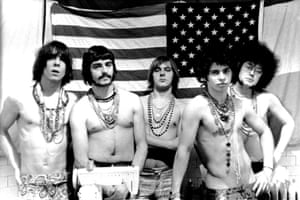 If MC5s actions landed them on government watch lists, they had little support from leftist groups either. When a limo came to greet them at their Fillmore East show, they were cast as sellouts, exploiting the movement for profit. People that were grounded in Marxist analysis found it easy to attack us, Kramer said. The people at the underground radio stations and the underground press had some cynicism about the MC5 too. I had expected trouble from the establishment. But I didnt think people in our own community would attack us too!

While the band were friendly with the Black Panthers, the partys newspaper labeled them psychedelic clowns.

The band even fell out with John Sinclair once he was arrested and sent to prison for up to 10 years for possession of two marijuana cigarettes. After the band imploded, felled by drugs, in-fighting and poor sales, Kramer became a full-time addict and dealer who later ended up in a federal prison. The later part of the book details his ongoing push for prison reform, elaborated by the group he founded, Jail Guitar Doors, named for a song the Clash wrote about him in 1977. After many more wayward years, Kramer got his life together. He became a solo artist, a creator of film and TV soundtracks and, incredibly, a first-time dad at 65. Thats how long it took me to stop being a child, he said with a laugh.

In the last decade, Kramer has become an idol to stars such as Eddie Vedder to Tom Morello. Likewise, MC5 are seen as pivotal role models for punk. Yet, Kramer finds the genre lacking. I kept thinking, Ive heard that sound before, he said. I hear more original things in hip-hop.

He also finds fault with all three MC5 albums. The live one didnt catch us on a particularly great night, he said. The second was too restrained and the third, High Time, pointed to the future of the band that, unfortunately, had no future.

Kramer will feature improved takes on songs from all three albums on his upcoming tour. Its taking place at a time when the political scene seems eerily similar to that of MC5s heyday. Trump and Nixon same old, same old, said Kramer. Again, we have an undeclared war on the other side of the world against people that are no threat to the US and theres across the board corruption. The similarity could cause anyone to be cynical. But we have to guard against that. We always need to strive for something better.