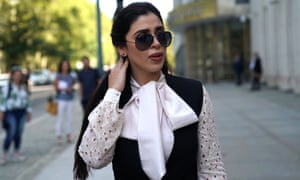 The vast amount of evidence prosecutors have assembled to back up their story of Guzmns two decades at the top has now landed with the defence, a dump in their opinion, and assembled with no rhyme or reason.

If the governments evidence against Guzmn is as good as it claims it is, Lichtman argued, why are they treating El Chapo in this fashion? Its making me think that maybe the evidence is not so good and theyre going to rely on the evidence of people whove spent their entire lives selling drugs and lying, he said.

Exacerbating the problem of sifting through that material, the defence claims, is being denied sufficient access to a client who does not speak English and whose ability to participate in his defence is hampered by the harsh conditions of his 17-month confinement at the Metropolitan Correctional Center in lower Manhattan.

Hes in isolation 24 hours a day and his condition is deteriorating, said Lichtman. He has no contact with other prisoners and very little contact with jailers, who dont speak Spanish. He has no ability to speak to his family and gets two calls from his sister totaling half-an-hour a month.

Though the judge, Cogan, has indicated hes not inclined to allow testimony about dozens of assassinations Guzmn allegedly ordered between 1989 and 2014, jurors will likely hear the story of a lowly marijuana farmer who rose to create a smuggling empire with annual revenues of $3bn and which, at its peak, was responsible for 25% of all illegal drugs entering the US from Mexico. Guzmns own fortune, prosecutors estimate, is in excess of $1bn.

After he was hauled from a drainage ditch in the coastal city of Mochis by Mexican federal authorities in January 2016, Guzmn told Mexican prosecutors that he was just a farmer who earns 20,000 pesos a year ($1,500) growing corn, sorghum and safflower. He did not, he claimed, belong to any cartel or have any cartel.

Part of the governments rationale for keeping Guzmn under conditions of maximum detention, his legal team concedes, may be rooted in Guzmns proven ability to escape from maximum-security prisons in Mexico once, according to his lore, secreted in a laundry cart and, in a second successful bid for freedom, via a mile-long tunnel that connected to the shower of his cell.

We have to be realistic, A Eduardo Balarezo argued. Were in a secure facility in downtown Manhattan. Does the government have so little faith it its own security that they think something like that could happen again?

As the government lays out Guzmans rise and fall at trial, much of the evidence will come in direct testimony from as many as 40 witnesses, among them Colombian drug lords, couriers, enforcers and accountants some of who may be allowed to testify under aliases.

One likely prosecution witness is Dmaso Lpez, Guzmns former right-hand man who was extradited to the US in July. One figure who might be called by the defence is actor Sean Penn.

Months ago, prosecutors petitioned the judge to exclude any mention of Guzmns sit-down interview with Penn for Rolling Stone magazine in 2015, which came shortly before the arrest that led to Guzmns extradition. Penn has denied his contact with Guzmn could have tipped off US or Mexican authorities to his whereabouts.

Asked if he believed Penns involvement led to his clients arrest, Balarezo said simply: I have no doubts about that.