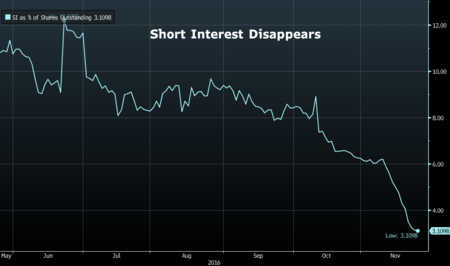 FLSmidth & Co. A/S was among Europes most-shorted stocks last year. Now, hedge funds are abandoning their bets against the company as Donald Trumps surprise election win has investors bracing for a construction boom that could revive an industry battered by years of hardship.

Short interest in the Danish maker of mining equipment and cement production lines fell to 3.1 percent last week, according to Markit data. Thats down from 6 percent before Trump won the U.S. election, and marks the lowest level of short interest in FLSmidth since 2009.

As recently as September 2015, bets against FLSmidth represented about 23 percent of shares outstanding, making it the most shorted company in the Stoxx Europe 600 Index after Carillion plc, according to Markit. A revival in commodities prices that pre-dates Trumps win has helped buoy the industry.

Theres been a shift in sentiment on FLSmidth after things have been very bad for a long time, Jacob Pedersen, chief of equity analysis at Sydbank A/S, said in a phone interview. The reduction in short-covering of the shares is tied to the share price gains and the better sentiment on the company.

Helped by higher prices for commodities, including copper, FLSmidths stock is up 21 percent this year, making it the biggest winner in the Danish benchmark index after cancer drug developer Genmab A/S. Its unfamiliar territory for FLSmidth, whose stock has declined over the past five calendar years.

The market has given FLSmidth, as well as many other shares, the benefit of the doubt with the election of Donald Trump, Pedersen said. The shares have gained a lot on the news, but it seems very speculative. It may well be that there will be more orders for FLSmidth with Trumps plans to invest in infrastructure, but at this stage we really dont know enough about what will happen in the U.S.

Trump has talked up his infrastructure investment plans, promising to spend as much as $1 trillion on roads, bridges and airports over the next decade. In his victory speech, the real estate mogul said he wants to make Americas infrastructure second to none.

Hedge funds scaling back bets against FLSmidth this month include AKO Capital LLP and Greenlight Capital Inc., according to filings to the Danish Financial Supervisory Authority. Both funds declined to comment.

The practice of short-selling means investors borrow stock and sell it, betting it will decline so they can make a profit when they repurchase it.

FLSmidth earlier this month reported third-quarter earnings that beat analyst estimates. The report was a turning point in the investment story, Andrew Wilson, an analyst at JPMorgan, said in a Nov. 14 note, raising his recommendation on the shares to overweight from neutral.

Even with a cautious view on both the mining cycle and the timing of any recovery in cement (Trump-driven or otherwise), the likely direction of news flow is positive, Wilson wrote. And, unlike some other names in the sector, the valuation has not overshot our view on a likely recovery.