Americas vitriol towards Clinton reveals a nation mired in misogyny 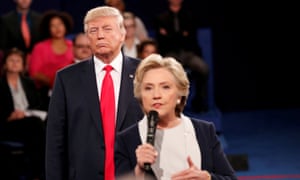 ‘We obsess over what gave Trump the election, but the one person who apparently shouldn’t contribute is the one who was in the eye of the storm.’ Photograph: Rick Wilking/Reuters

You do not have to like Clinton to grasp that she is an important historical figure. In addition to being in American history, she is the female candidate by a major party in a US election, and the first candidate that was a lady. These factors alone mean she absolutely should write a book, and even if she spent 500 pages composing “Not my fault! Not my fault!” It would be a fascinating document. Again and again, things she warned about on the campaign trail have proven correct, not least the dangers of placing the nuclear codes to the hands of a man “who you can bait with a tweet”.

And yet her book was bracketed alongside Ivanka Trump’s overprivileged wafflings by one columnist who proudly declared she hadn’t bothered to see it, and disregarded as spiteful “score-settling” and “blame-shifting” by others who say they have. For the past eight months people have talked obsessively about the factors that gave Trump the election — Russia, James Comey, voter suppression, sexism, racism. But the one person who apparently should not promote the discussion is the person who was in the eye of the storm.

People have been telling Clinton to close up for as long as she’s been in the public eye, then blaming her for their choices. Voters were incensed when she stated that she decided to work instead of staying home to bake cookies. “If I ever entertained the idea of voting for Bill Clinton, the smug bitchiness of his wife’s comment nipped that in the bud,” one reader wrote to Time magazine. When Clinton was made chair, by her husband, of this task force overseeing the 1993 strategy to offer universal healthcare, she was derided as a meddling woman and multiple news organisations insisted there was not an healthcare crisis in the US anyway. When she was elected to the Senate, Trent Lott, the then Republican leader, said he hoped she would be struck by lightning before coming. She has made concessions to people’s fear of a intelligent woman: she submitted a cookie recipe into a women’s magazine in 1992. In the Senate, she poured coffee with a smile for men who had openly said they loathed her.

A justification for this loathing of Clinton, one that’s been trotted out frequently since her election loss, and now again as an excuse to bash her book, is that she is uniquely unlikable. “She was a terrible candidate!” Go the cries, ignoring the fact she had been the most qualified candidate in a production, who got more votes than any candidate ever, with the exception of Barack Obama in 2008.

What these people are really saying is: “Only white voters matter.” It’s an inconvenient fact (to borrow a phrase from another losing candidate who won the popular vote, and yet was not told to clear off when he spoke afterwards), but the only voters that deemed Clinton inadequate were white ones, women included. On the other hand, 95% of black women and 70 percent of Hispanic women voted for her. Clinton, we have been told repeatedly by authors such as Mark Lilla, failed since she indulged in “identity politics”, which never wins elections, as if white people do not have an “identity” and Trump didn’t win by explicitly playing with it, such as by taunting a Muslim Gold Star family and characterising Mexican immigrants as rapists and drug-dealers.

Of course people can argue with Clinton’s ideas. But to dismiss her book without even reading it, with the requirement that she “shut the fuck up” is yet more evidence of the misogyny that’s always, of course, been supporting the outsized vitriol she attracts. Worse, she is an uncomfortable reminder for white liberals that nearly all white Americans would vote than a woman. For all the talk about how Clinton lost because she failed the working class, 88% of African Americans, that have suffered much worse and longer economic hardship than white Americans, voted for her.

Ta-Nehisi Coates writes in his new book, We Were Eight Years in Power: “Certainly not every Trump voter is a white supremacist. But every Trump voter felt it acceptable to hand the fate of the country over to one.” There is no justification for that, howevermuch others try to blame Clinton. But national self-awareness is painful. Much easier to burn the witch, and her publication.