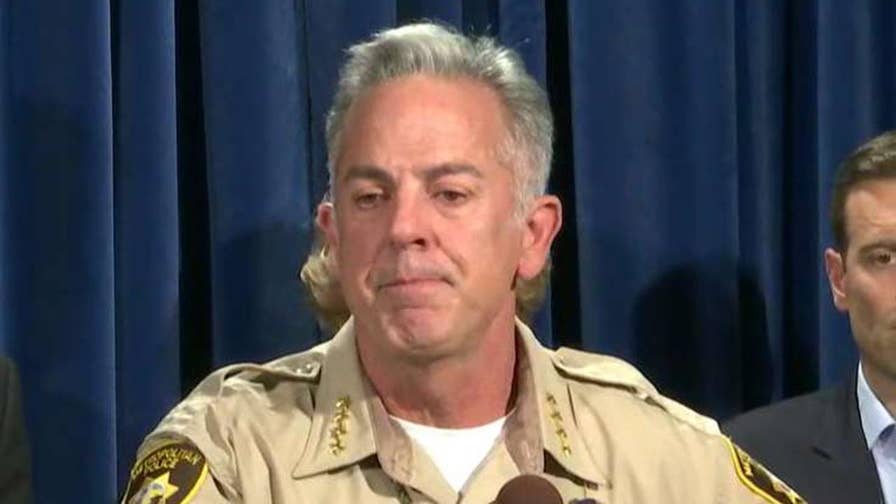 A gunman turned a Las Vegas concert into a killing field Sunday night from his perch on the 32nd floor of the Mandalay Bay Resort and Casino, using at least 10 guns to rain down a steady stream of fire, murdering at least 59 people and injuring more than 520 others in the deadliest mass shooting in modern United States history.

The suspect, who died of a self-inflicted gunshot wound, was identified as 64-year-old Stephen Paddock, a resident of Mesquite, Nevada. Police initially sought a woman believed to be Paddock’s roommate, Marilou Danley, as a “person of interest.” Detectives later made contact with her, and “do not believe she is involved with the shooting on The Strip.”

Clark County Sheriff Joseph Lombardo said an “excess of 10 rifles” were found in the room, but did not immediately reveal a motive, saying “I can’t get into the mind of a psychopath at this point.”

Paddock reportedly had about 23 guns in his hotel room, according to police in an evening press conference.

A gunman killed at least 59 people and injured hundreds Sunday night from the 32nd floor of the Mandalay Bay resort and casino.  (AP Photo/John Locher)

Fully automatic weapons produced after the mid-1980s are illegal in the U.S. Those made before can still be purchased, however, buying one requires heavy regulation, including a background check by ATF and law enforcement notification. In recent years, however, some criminals have illegally converted semi-automatic weapons into automatic ones.

“There were no red flags,” Michel told The Associated Press. “I had no idea he would be capable of this.”

Paddock had been in the hotel room since September 28, according to Lombardo. The sheriff said a check of federal and state databases showed Paddock was not on law enforcement authorities’ radar before the bloodbath.

Authorities said two on-duty Las Vegas Metropolitan Police Department officers were injured during the shooting. One is in stable condition after surgery, and the other sustained minor injuries. Two off-duty police officers attending the concert were killed.

President Trump said the mass shooting “was an act of pure evil,” and praised first responders in an address to the nation.

“To the families of the victims, we are praying for you and we are here for you,” Trump said, adding that he will visit Las Vegas on Wednesday to meet with first responders and families.

The gunman, who fired down on the Route 91 Harvest Festival from a room in the Mandalay Bay Resort and Casino, died from a self-inflicted gunshot wound just as police made entry to the room, according to LVMPD undersheriff Kevin McMahill.

At this time, federal officials do not see any connection to international terrorism and little is known about Paddock’s motivation, federal law enforcement sources said. The Islamic State terror group took credit for the Las Vegas shooting, saying the gunman converted to Islam months ago, but provided no evidence to back up the claim.

FBI Special agent-in-charge Aaron Rouse said at a news conference the agency has “determined to this point no connection with an international terrorist group.”

People assist a wounded woman at the Tropicana during an active shooter situation on the Las Vegas Stirp in Las Vegas Sunday, Oct. 1, 2017.  (Chase Stevens/Las Vegas Review-Journal via AP)

Paddock was using Danley’s slot machine card, which is how police got ahold of her name although she was in the Philippines at the time of the incident, Sisolak said.

The gunman’s brother, Eric Paddock, told reporters outside his Central Florida home early Monday “an asteroid just fell on us,” and said Stephen Paddock has no history of mental illness.

Paddock said his brother is “just a guy” and he “freaked,” and had retired to Vegas because he liked gambling. The shooter’s brother said Paddock didn’t care about religion or politics.

He later told reporters that his brother was a multimillionaire who made money investing in real estate, in addition to working as an accountant for a number of years.

The scene of the shooting in Las Vegas.  (Fox News)

The Department of Homeland Security said Monday morning that the department is “closely monitoring” and helping partners investigate the tragedy, but at this time has “no information to indicate a specific credible threat involving other public venues in the country.”

“To the many families whose lives have been changed forever by this heinous act, we offer you our prayers and our promise that we will do everything in our power to get justice for your loved ones,” Sessions said in a statement.

Authorities first received calls about an active shooting at about 10:08 p.m. Country music star Jason Aldean was performing at the Route 91 Harvest Festival when the gunfire erupted.

Police officers stand at the scene of a shooting near the Mandalay Bay resort and casino on the Las Vegas Strip, Monday, Oct. 2, 2017, in Las Vegas.  (AP Photo/John Locher)

Aldean was performing his last song of the night. Initially, those in attendance said they thought the sound was firecrackers. But as the shots continued, Aldean stopped singing and some concertgoers could be heard yelling to each other to get down.

One witness told a local television station that he heard “hundreds of shots.” The gunfire was rapid and reportedly confused with firecrackers.

Firearms experts hesitated Monday to attribute the shooter’s rapid fire from his room on the 32nd floor of the Mandalay Bay Resort and Casino to an automatic weapon’s fire.

Automatic weapons, sometimes referred to as machine guns, fire a stream of bullets when the trigger is pulled once and held down. They differ from semiautomatic weapons, which require one trigger pull for each round fired.

These devices, such as a Slide Fire stock, are legal and can be bought for about $300.

Equipping an AR-15, for example, with a Slide Fire stock would be far cheaper and easier than buying a machine gun. Machine guns in the U.S. can cost upwards of $15,000 and require the buyer to undergo a personally intrusive and months-long application process with the Bureau of Alcohol, Tobacco, Firearms and Explosives.

“You couldn’t tell where it was coming from. It was loud and non-stop,” he said.

Some concertgoers stayed behind to offer help to those around them.

“Everybody I saw breathing, I helped,” a concertgoer told Fox News.

The wife of a Tennessee man killed by the Las Vegas shooter said her husband died because he saved her from being shot. Heather Gulish Melton told Fox affiliate WZTV that her husband, Sonny Melton of Paris, Tennessee, was among the 50 killed Sunday night.

Kodiak Yazzie, 36, said the music stopped temporarily and started up again before another round of pops sent the performers ducking for cover and fleeing the stage.

“It was the craziest stuff I’ve ever seen in my entire life,” Yazzie told the Associated Press. “You could hear that the noise was coming from west of us, from Mandalay Bay. You could see a flash- flash- flash- flash.”

As the thousands of fans in the crowd began to flee, Yazzie took cover and said he saw flashes of light coming from the Mandalay Bay hotel tower high above.

Another concertgoer told the Las Vegas Review-Journal the shots sounded like fireworks, and she hid in a sewer.

“It was a horror show,” Ivetta Saldana told the newspaper. “People were standing around, then they hit the floor.”