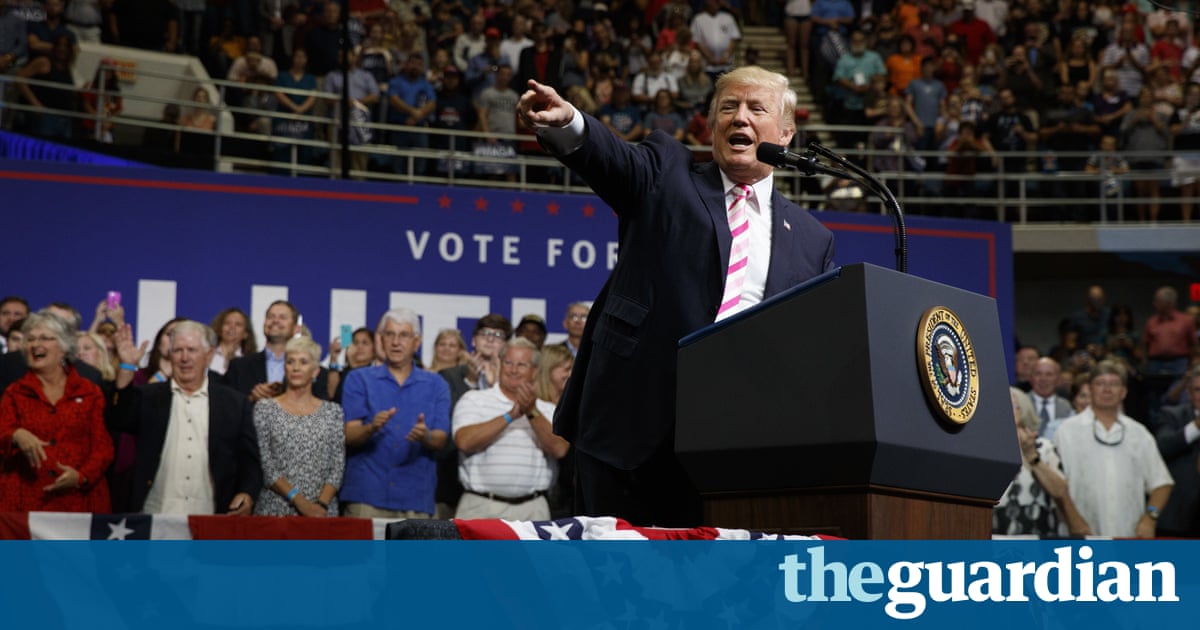 Donald Trump launched a sensational attack on NFL players who have kneeled in protest of the national anthem during a speech in Alabama on Friday night, challenging the league’s owners to release anyone who engages in the movement started last year by former San Francisco 49ers quarterback Colin Kaepernick.

“Wouldn’t you love to see one of these NFL owners, when somebody disrespects our flag, to say, ‘Get that son of a bitch off the field right now. Out! He’s fired. He’s fired! ”’ the president said at a rally for Republican senator Luther Strange, who is currently running in a special election to stay in the seat vacated by attorney general Jeff Sessions.

“You know, some owner is going to do that. He’s going to say, ‘That guy that disrespects our flag, he’s fired.’ And that owner, they don’t know it [but] they’ll be the most popular person in this country.”

Trump went on to blame the NFL’s dip in TV ratings to rule limit head injuries and changes implemented to make the game less violent.

The problem was thrust back into the spotlight on Thursday with the revelation that Aaron Hernandez, the former New England Patriots star who killed himself in April when serving a life sentence for murder, suffered a “severe” case of chronic traumatic encephalopathy (CTE), the progressive degenerative brain disorder that has been linked to repeated blows to the head.

“The NFL ratings are down massively,” Trump said. “Now the No1 reason happens to be they like watching what’s happening … with yours truly. They like what’s happening. Because you know today if you hit too hard: 15 yards! Throw him out of the game!”

Individuals encouraged attending NFL games to leave the stadium in counter-protest if they see that a player kneeling.

“But do you know what’s hurting the game more than that?” he said. “When people like yourselves turn on television and you see those people taking the knee when they’re playing our great national anthem. The only thing you could do better is if you see it, even if it’s one player, leave the stadium.

“The NFL and our players are at our best when we help develop a feeling of unity in our nation and our culture,” Goodell said. “Divisive comments like these demonstrate an unfortunate lack of respect for the NFL, our great game and all of our players, and a failure to comprehend the overwhelming force for good our players and clubs represent within our communities.”

DeMaurice Smith, executive director of the NFL Players Association, said the union “will never back down when it comes to protecting the constitutional rights of our players as citizens as well as their security as guys who compete in a game that exposes them to great dangers”.

Current and former players decried the president’s remarks. Minnesota Vikings running back Bishop Sankey tweeted: “It’s a shame and disgrace when you have the president of the US calling citizens of the nation sons of a bitches.”

“When will people learn that fear won’t make someone sit down,” wrote Chris Conley, a wide receiver with the Kansas City Chiefs. “It quite possibly will make more stand up for what they believe in.”

Two-time All-Pro running back LeSean McCoy said: “It’s really sad man … our president is a asshole.” Husain Abdullah, who played seven seasons with the Vikings and Chiefs, added: “Now we know why [Kaepernick] ai not playin.”

Undaunted, Trump wrote on Twitter: “If a player wants the privilege of making millions of dollars in the NFL or other championships, he or she should not be permitted to disrespect our Great American Flag (or Country) and should stand for the National Anthem. If not, YOU’RE FIRED. Find something else to do!”

Goodell, he wrote, was “attempting to justify the total disrespect certain players show to our nation. Tell them to stand!”