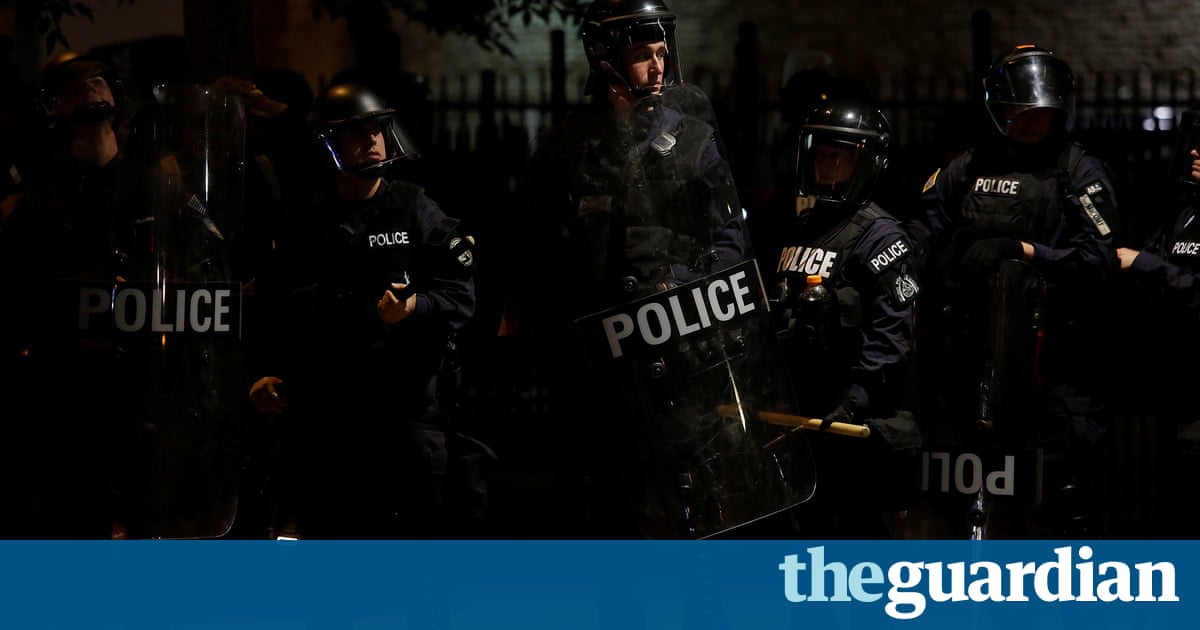 Police officers in riot gear gathered alongside a St Louis boulevard late on Sunday night, chanting “whose street, our street”, a common refrain used by people protesting against the acquittal of a white former officer on the death of a black man, after successfully clearing the road of demonstrators and onlookers.

In a news conference early on Monday, interim police chief Lawrence OToole said authorities had seized at least five weapons and said he was “proud to tell you the city of St Louis is safe and the police owned tonight”.

“We’re in control,” he said. “This is our city and we’re going to protect it.”

The chant attracted and some police officers and criticism apart. In a announcement, Sgt Heather King, president of the Ethical Order of Police, a group founded by African American officers, stated: “That chant goes against the very code of ethics we swore to abide by.

“Whether we agree with demonstrations, protests or acts of violence, it is our job to do our job free of personal bias.”

On Twitter on Monday, the group said: “We are human and we will make mistakes. We are also people who have arrest, freedom, or death. No need 2 chant.”

Hundreds of officers had mobilized after another day of peaceful protests over the acquittal of Jason Stockley in connection with the death of Anthony Lamar Smith. The protest began at the police headquarters downtown. Hundreds of people marched through downtown streets, the posh Central West End and the trendy Delmar Loop area of nearby University City.

Protesters also marched through two shopping malls in a wealthy area of St Louis County. Following the pattern of the previous days, more than 1,000 people marched peacefully for several hours. By nightfall, most had gone home.

After nightfall there were reports of property damage and vandalism, for a third night in a row. Several windows were broken at a Marriott hotel and at other businesses. Concrete planters were knocked over and trash cans tossed into the street.

There were also reports from demonstrators of aggressive responses from police, including the macing and violent takedowns of compliant demonstrators.

Police made more than 80 arrests, after authorities said people ignored orders to disperse following the peaceful protests. Demonstrators countered that police boxed them in, giving them no way to disperse. At least one credentialed reporter and several members of the public who were live-streaming the protests were detained.

Mayor Lyda Krewson told reporters early on Monday: “The days have been composed and the nights have been destructive.” Krewson said that was “unacceptable” and that “destruction can’t be tolerated”.

City police described being attacked by protesters using “unknown chemicals”. Demonstrators countered that the liquid some carried in bottles was apple cider vinegar, which some use to counter the affects of teargas. In one picture posted to social media by police and described as an effort to “confiscate bottles with unidentified compounds”, one bottle was clearly labelled “apple cider vinegar”.

One officer suffered a leg injury and was taken to a hospital. His condition was not known.

On Monday, daylight brought calm. A racially mixed crowd of more than 150 blocked a busy street on the western edge of downtown, while state representative Bruce Franks was at the front of a march to city hall. Protesters chanted: “We will win together” and demanded a civilian police review board, then disbanded.

A judge ruled on Friday that Stockley, a 36-year-old who left the St Louis department and moved to Houston three years ago, was not guilty of murder in the death of Smith in 2011. Smith fled from Stockley and his partner as they tried to arrest him for a suspected drug deal. Stockley testified he felt endangered after he saw Smith holding a silver revolver when he backed his car toward the officers and sped away.

Prosecutors said Stockley planted a gun in Smith’s car. The officer’s DNA was on the weapon but Smith’s wasn’t. Dashcam video from Stockley’s cruiser recorded him saying he was “going to kill this motherfucker”. He shot Smith five times.

Protests over Stockley’s acquittal have followed a pattern born of the reaction to the killing of Michael Brown, an unarmed teenager, in nearby Ferguson in 2014. The majority of demonstrators are law-abiding. As the night wears on a subsection emerges, more willing to confront police.

Many protesters believe police provoked demonstrators by showing up in riot gear and armored vehicles. Police said they had no choice but to protect themselves.

Democratic representative Michael Butler said police should target the agitators and allow others to continue demonstrating.

“There’s not been any learning from Ferguson,” he said.