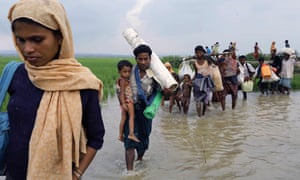 Rohingya refugees from Myanmar’s Rakhine state arrive in Bangladesh:120,000 people have been forced to flee in the past fortnight. Photograph: KM Asad/AFP/Getty Images

And this is just one report. Amnesty International published a similar dossier last year. There is a mountain of evidence suggesting that these actions are an attempt to remove this ethnic group from Myanmar.

Hard as it is to imagine, this campaign of terror has escalated in recent days. Refugees arriving in Bangladesh report widespread massacres. Malnutrition ravages that the Rohingya, afflicting 80,000 kids.

In response Aung San Suu Kyi has blamed these atrocities, in a chillingly remote interview, on insurgents, also expressed astonishment that anyone would want to fight the army when the government has done so much for them. Maybe this astonishment comes readily to someone who has never visited northern Rakhine state, where most of this is happening.

It is true that some Rohingya people have taken up arms, and that the latest massacres were triggered by the killing of 12 members of the security forces last month, attributed to a group that calls itself the Arakan Rohingya Salvation Army. Nevertheless, the military response has been to attack whole populations, irrespective of any possible involvement in the insurgency, and to spread such terror that 120,000 people are forced to flee in the past fortnight.

In her Nobel lecture, Aung San Suu Kyi commented: “Wherever suffering is ignored, there will be the seeds of conflict, for suffering degrades and embitters and enrages.” The anger of those Rohingya people that have taken up arms has been used as an excuse to accelerate an existing programme of ethnic cleansing.

She’s not only denied the atrocities, trying to protect the armed forces from criticism; she’s also denied the very identity of those being assaulted, asking the US ambassador to not use the term Rohingya. This is in accord with the government’s policy of disavowing their presence and classifying them — though they have lived in Myanmar for centuries — as interlopers. She has upheld the 1982 Citizenship Law, which prohibits these people their rights.

When a Rohingya woman provided detailed allegations about her gang rape and associated accidents by Myanmar soldiers, Aung San Suu Kyi’s office submitted a banner on its Facebook page reading “Fake Rape”. Given her reputation for micromanagement, it seems improbable that such actions would have been taken without her approval.

Not only has she snubbed and obstructed UN officials who have sought to investigate the treatment of the Rohingya, but her government has prevented aid agencies from distributing food, water and medicines to people displaced or isolated from the violence. Her office has accused aid workers of helping “terrorists”, placing them at risk of assault, further slowing their efforts to help people who face starvation.

So far Aung San Suu Kyi has been insulated by the apologetics of those who refuse to believe she could abandon the principles to which she appealed. A list of explanations is proffered: that she did not wish to jeopardise her prospects of election; that she doesn’t wish to offer the armed forces a pretext to tighten their grip on power; that she must keep China happy.

None of them stand up. As a great democracy campaigner once remarked: “It is not power that corrupts, but fear. Fear of losing power corrupts those who wield it.” Who was this person? Aung San Suu Kyi. But now, whether out of bias or from fear, she denies to others the liberty she rightly claimed for herself. Her regime excludes — and in some instances attempts to silence — the very activists who helped to ensure her own rights were recognised.

This week, to my own astonishment, I found myself signing a request for the revocation of her Nobel peace prize. I believe the Nobel committee should maintain responsibility and draw them if its laureates later violate the principles for which they were recognised. There are two cases where this appears to be appropriate. One is Barack Obama, who was given the prize before he had been tested in office. His programme of drone strikes, which slaughtered large numbers of civilians, should disqualify him from this honor. Another is Aung San Suu Kyi.

Please sign this petition. Why? Because we consider an extraordinary situation: a Nobel peace laureate complicit in crimes against humanity.

George Monbiot is a Guardian columnist