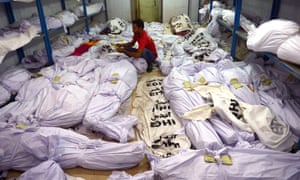 Bodies at a morgue at Karachi, June 2015, during a heatwave in which nearly 700 people died. Photograph: Rizwan Tabassum/AFP/Getty Images

“In the near term — 2050 or 2070 — the US Midwest is going to be one of the hardest hit,” said Huber. “There’s a plume of warm, moist air that heads up through the central interior of the US during just the right season and, man, is it hot and sticky. You just add a couple of degrees and it gets really hot and sticky. These are thresholds, right? These aren’t just like smooth functions. It gets above a certain number and you hurt yourself very badly.”

China, Brazil, and Africa face likewise infernal forecasts, while the already sweltering Middle East has what Huber calls “existential problems”. The first flickers of this slow-motion catastrophe might be familiar to Europeans struggling to accommodate the tens of thousands of refugees at their borders: the collapse and mass migration of Syrian society came after a punishing four-year drought. Others have noted that the Hajj, which brings two million religious pilgrims to Mecca each year, will be a spiritual obligation to fulfil because of the limits of heat stress in the region in only a few decades.

However, for the very worst-case emissions scenarios, heatwaves wouldn’t merely be a public health catastrophe or a “threat multiplier”, as the Pentagon calls global warming. Humanity would have to abandon most of the Earth it inhabits. In their paper, Huber and Sherwood write: “If warmings of 10C were really to occur in the next three centuries, the area of land likely rendered uninhabitable by heat stress would dwarf that affected by rising sea level.”

Huber said: “If you ask any schoolchild, ‘What were mammals doing at the age of the dinosaurs?’ they’d say they were living underground and coming out at night. Why? Well, heat stress is a very simple explanation. Interestingly, birds have a higher set-point temperature — ours is 37C, birds’ is more like 41C. So I really think that’s a deep evolutionary relic there. Because that wet-bulb temperature was probably maxing out around 41C from the Cretaceous, not 37C.”

Back at the diner in New Hampshire, Huber told me about his “favourite story”: the US Army’s real-life parable of the so-called Motivated Point Man. In 1996, a platoon of light infantry spent days in the Puerto Rican jungle acclimatising to stifling heat and humidity, cautiously monitoring their water intake before simulating a night-time raid. The platoon included “some of the most motivated and fit soldiers in the battalion”. When the evening of the raid came, the platoon leader began leading his troops through the jungle, machete-ing a path through the brush. Before long, he was felled by fatigue and delegated his leadership to an underling. When the second private failed to advance the platoon quickly enough, the platoon leader demanded to lead again. But soon he found himself hyperthermic and unable to walk. His soldiers had to douse him in cold water and supply him with intravenous infusions. Eventually, four soldiers had to carry him. Before long, the extra demands vitiated the entire platoon, all of whom began to fall prey to heat stress. The exercise had to be called off before it became a massacre.

“So I look at that as, if it is night-time and acclimatised, fit people can just disintegrate into a pool of useless people on stretchers. That’s what I see happening to society, to civilizations,” Huber said. “If you want to know how mass extinctions happen, that’s how. So when people talk about the Pleistocene megafauna extinctions and Clovis people, sometimes they act like it is a mystery how these things happen. But it happens in precisely the same way. You’ve got something tearing apart the strongest members, the poorer ones attempt to fill in the gaps, they’re really not strong enough to take it and the entire thing collapses.

“You want to know how societies collapse?” Huber said. “That’s how.”

What cries when as the temperatures rise

1.6C higher
About half of wooded tundra is missing, putting pressure on its inhabitants like moose, lynx and brown bears.