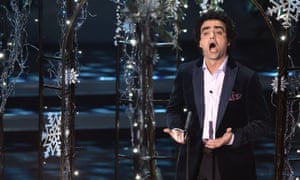 In 1983, Brilla convinced Maria Carbone, a retired Italian operatic soprano, to work with them. Carbone was nearing 80, but still had a powerful voice. While Carbone sang, Brilla would clasp Carbones abdomen to feel what was happening inside her body. Carbone started with an aria from Tosca. As her voice rose, hitting higher and higher notes, Brillas eyes widened. I could feel this tick, tick. Tick, tick, she recalled. It was the natural up-down release of her diaphragm. Nothing else was happening. Carbones ribcage wasnt ballooning out as she sang, and there were no deep gulps of air, as is common with todays big-voiced singers. More amazing still, the movement of Carbones abdomen while singing was just as quiet and rhythmic as when she spoke. It was a discovery of what the perfect singers posture should be, Paglin said.

Brilla added: Whereas all the teachers in my life had been telling me to open, open, open to exaggerate her breathing and lunge into every high note to produce the biggest sound Carbone was demonstrating the opposite.The root of the problem, they realised, is in classrooms. Too many students graduate from conservatories who dont know how to sing, and its leading to injury, Brilla said. Weve got to stop this. Its ass-backwards!

It is not just singers whose careers are threatened by deteriorating vocal cords. In 1989, the Italian actor Maddalena Crippa momentarily lost her voice during a live performance of Shakespeares bloodiest work, Titus Andronicus. Crippa was playing Tamora, the vanquished queen of the Goths. After Tamoras son is murdered before her eyes, Crippa said she unleashed these uncontrollable cries. But, for a moment, her next line wouldnt come out. It was the first time in her acting career that Crippas vocal cords had failed her. The suffering I felt was indescribable, she told me.

That suffering continued for more than a decade. Crippas voice was no longer reliably crisp and sonorous, and a burning pain lingered in her throat. After visiting vocal coaches and throat specialists, she got the prognosis that all performers dread: nodules on her cords. Cortisone injections and voice exercises worked well enough to get her back on stage, but her confidence was shaken. You mean you still dont know how to use your voice? she remembered thinking. Its demoralising. Then, in 2002, at the suggestion of a fellow actor, Crippa visited Brilla and Paglins Osimo studio.

Unlike medical doctors, Brilla and Paglin dont own a laryngoscope that allows them to peer into the throat. If someone comes to them with injuries, they treat the problem by ear. They sing a soft note and ask the student to match it precisely. They can hear in the response where the pitch is off-key, and where the damage is located on the cord. (When I spoke with Adeles surgeon, Steven Zeitels, he demonstrated something similar, singing a scale to isolate where his own cord is damaged a perturbation, as its called, the result of years of long hours in the classroom.)

The moment Crippa said hello, Brilla and Paglin knew there was something very wrong with her voice. She exuded tension, as if bracing for confrontation, and took big, gulping breaths before speaking. Brilla and Paglin often see this problem with singers; their vocal cords are so used to having great quantities of air shoved at them that the cords wont respond without that force. Once you start pushing, youre condemned to push for the rest of your life, Paglin told me. Unless you learn a new way of doing it.

In their studio, Brilla and Paglin instructed Crippa to lie on her back and produce a series of high notes, which Paglin demonstrated for me. It sounded like a faint squeaking, as if she was gently releasing air from the neck of a balloon. When Crippa was told to reproduce what Paglin called a floating high C, she protested, saying she couldnt get that far up the scale. Finally, she gave it a try, producing a barely audible piff, followed by a more sustained tone. Hearing herself, Crippa broke down and cried. They were tears of joy, Crippa told me. They touched a nerve deep inside me. I mean, this is my voice. My voice.

Brilla and Paglin say they can restore most vocal cord problems naturally, via exercises that massage out the defect over time. They aim to stimulate the cords precisely where they arent coming together properly, and to break students out of the bad habits that cause problems in the first place: taking big gulps of air, tensing the throat and jaw muscles, forcing the mouth to open to exaggerated proportions, and the urge to scream out the high notes.

There are limits to what Brilla and Paglin claim to be able to do for an ailing artist. Paglin told me of a time when she was watching a singer perform on stage, and could tell there was something very wrong. She got a message to the singer that he urgently needed to see a doctor. He did, and was diagnosed with a form of throat cancer.

But their track record with other difficult cases has earned them a small international following. The veteran Italian stage actor Moni Ovadia was one of their earliest big-name success stories. Throughout his mid-40s, he performed up to 250 shows a year, in Europe and the US, but by 48 he was ready to quit showbusiness. His voice had become flat and raspy, and he found it physically painful to perform. He credits Paglin and Brilla with restoring his voice and his career. They saved my life, he told me. Today, at 71, he is a bull on stage, and can perform non-stop for up to three hours.

In May, at Brilla and Paglins studio in Osimo, I watched an aspiring dramatic soprano named Emanuela Albanesi rehearse the high-energy duet Mi Volete Fiera?, from Gaetano Donizettis comic opera Don Pasquale. There are few, if any, widely accepted standards for teaching singing, and many teachers complain that too many of their peers get jobs because of how they sound, not what they know. Paglin and Brilla mine the internet for teaching videos that concern them, such as one in which a soprano chides a student to open her mouth wider and wider as she sings an aria, in order to achieve more volume; not until the student plugs her fist into her mouth is the teacher satisfied.

Albanesi, however, sang with an ease that belied the strength of her highest notes. As she came to the final grazie!, I was expecting a thunderous, take-the-roof-off moment, but she never lost the disarming grin with which she performed. I thought of that photo of Enrico Caruso singing with such relaxed ease. I whispered to Brilla that it was the first time I had ever been able to make out each and every lyric in a such an intense operatic number. Im telling you, she said. Weve cracked it.

The question remains: could Brilla and Paglins approach permanently cure an artist like Adele by teaching her to sing in a more natural way? Steven Zeitels is dismissive of such an approach, and quick to defend Adele and his other clients against the contention that bad technique is causing their vocal problems. People used to think if you needed an operation it meant you dont know how to sing. The people I see they know how to sing!

Zeitels believes that medical specialists such as himself are becoming increasingly important to the arts, which he compared to other demanding physical pursuits. Any athletic endeavour will eventually take a toll if done for long enough, he said. Whats terrific is were getting better and better at bringing people back.

Specially trained vocal therapists have also restored performers to health through voice training, but medical experts advise taking this route only for minor vocal injuries, such as small nodules. Otherwise, they strongly suggest surgery. This attitude rankles Brilla and Paglin, who have cured artists such as the internationally renowned jazz singer Maria Pia De Vito, who suffered from vocal edema, a painful swelling of the cords, for which surgery is the generally recommended course of action. What irony, Paglin said. There is an industry built around singers who harm themselves while singing, and there is another one built around fixing them up.

Another renowned throat surgeon, Dr Robert T Sataloff, who has performed voice-corrective surgery on several Grammy Award winners, including Patti LuPone, bristles at the notion that surgery is not a sensible way to keep singers healthy. Combined with proper education on the dangers of improper singing technique, he believes it can keep people on stage for longer. Is it perfect? No. And it probably never will be, he told me. Like Zeitels, Sataloff drew a sporting analogy. Injury is inevitable and thats when they end up in my office.