Why the lack of Indian and African faces in Dunkirk matters 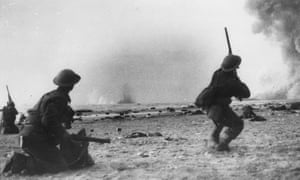 A vast, all-white production such as Nolans Dunkirk is not an accident. Such a big budget film is a product of many hundreds of small and large decisions in casting, production, directing and editing. Perhaps Nolan chose to follow the example of the original allies in the second world war who staged a white-only liberation of Paris even though 65% of the Free French Army troops were from West Africa. Perhaps such a circumscribed, fact-free imagination is a product of rewriting British history over the past decades, not in the least by deliberate policies including Operation Legacy? Knowingly or not, Nolan walks in the footsteps of both film directors and politicians who have chosen to whitewash the past.

But why is it so important for Nolan, and for many others, that the film expunge all non-white presence on the beach and the ships? Why is it psychologically necessary that the heroic British troops be rescued only by white sailors? What would change if brave men fighting at Dunkirk wore turbans instead of helmets? What would alter if some of the soldiers offered namaaz on the sands before rising to face the advancing enemy for that one last time?

Why is it so important that the covering fire be provided by white French troops rather than North African and Middle Eastern ones? Those non-white faces I mentioned earlier they were French troops scrabbling to board British boats to escape. The echoes of modern politics are easy to see in the British-first policy of the initial retreat that left French troops at the mercy of the Nazis. In reality, non-white troops were at the back of the queue for evacuation, and far more likely to be caught and murdered by Nazi soldiers than their white colleagues who were able to blend into the crowd.

Could we still see our neighbours as less than human if we also saw them fight shoulder-to-shoulder with our boys in the good war? Would we call those fleeing war cockroaches and demand gunboats to stop them from reaching our white cliffs if we knew they had died for the freedoms we hold so dear? More importantly, would anti-immigration sentiment be so easy to weaponise, even by the left in the past and the present if the decent, hardworking Britons knew and recognised how much of their lives, safety and prosperity are results of non-British sacrifices? In a deeply divided, fearful Britain, Nolans directorial choices succeed as a Brexiteer costume fantasy, but they fail to tell the story of Operation Dynamo, the war, and Britain. More importantly, they fail us all, as people and a nation.

All storytellers and novelists, poets, journalists, and filmmakers are, ultimately, just that know the power we hold. Stories can dehumanise, demonise and erase. Such stories are essential to pave the way for physical and material violence against those we learn to hate. But stories are also the only means of humanising those deemed inhuman; to create pity, compassion, sympathy, even love for those who are strange and strangers. Stories decide the difference between life and death. And that is why Dunkirk and indeed any story is never just a story.