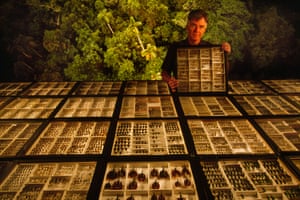 They are multitudinous almost beyond our imagining. They thrive in soil, water, and air; they have triumphed for hundreds of millions of years in every continent bar Antarctica, in every habitat but the ocean. And it is their success staggering, unparalleled and seemingly endless which makes all the more alarming the great truth now dawning upon us: insects as a group are in terrible trouble and the remorselessly expanding human enterprise has become too much, even for them.

The astonishing report highlighted in the Guardian, that the biomass of flying insects in Germany has dropped by three quarters since 1989, threatening an ecological Armageddon, is the starkest warning yet; but it is only the latest in a series of studies which in the last five years have finally brought to public attention the real scale of the problem.

Does it matter? Even if bugs make you shudder? Oh yes. Insects are vital plant-pollinators and although most of our grain crops are pollinated by the wind, most of our fruit crops are insect-pollinated, as are the vast majority of our wild plants, from daisies to our most splendid wild flower, the rare and beautiful ladys slipper orchid.

Furthermore, insects form the base of thousands upon thousands of food chains, and their disappearance is a principal reason why Britains farmland birds have more than halved in number since 1970. Some declines have been catastrophic: the grey partridge, whose chicks fed on the insects once abundant in cornfields, and the charming spotted flycatcher, a specialist predator of aerial insects, have both declined by more than 95%, while the red-backed shrike, which feeds on big beetles, became extinct in Britain in the 1990s.

Ecologically, catastrophe is the word for it.

It has taken us a lot of time to understand this for two reasons: one cultural, one scientific. Firstly, we generally do not care for insects (bees and butterflies excepted). Even wildlife lovers are fixed on vertebrates, on creatures of fur and feather and especially the charismatic megafauna, and in the population as a whole there is even less sympathy for the fate of the chitin-skeletoned little things that creep and crawl; our default reaction is a shudder. Fewer bugs in the world? Many would cheer.

Secondly, for the overwhelming majority of insect species, there is no monitoring or measurement of numbers taking place. It is a practical impossibility: in the UK alone there are about 24,500 insect species about 1,800 species of bugs, 4,000 species of beetles, 7,000 species of flies and another 7,000 species of bees, wasps and ants and most are unknown to all but a few specialists. So their vast and catastrophic decline, at last perceptible, has crept up on us; and when first we began to perceive it, it was not through statistics, but through anecdote.

The earliest anecdotal impression of decline was through what is sometimes termed the windscreen phenomenon (or windshield if you live in the US): time was, especially in the summer, when any long automobile journey would result in a car windscreen that was insect-spattered. But then, not so much. Two years ago I wrote a book focusing on this curious happening, but I gave it a different name: I called it the moth snowstorm, referring to the moths which on summer nights in my childhood might cluster in such numbers that they would pack a speeding cars headlight beams like snowflakes in a blizzard.

But the point about the moth snowstorm was this: it had gone. I personally realised it had disappeared, and began writing about it as a journalist, in the year 2000; but it became obvious from talking to people who had also observed it that its disappearance dated further back, probably to about the 1970s and 1980s. And the fact that an entire large-scale phenomenon such as this had simply ceased to exist pointed inescapably to one grim conclusion: though unnoticed by the world at large, a whole giant ecosystem was collapsing. The insect world was falling apart.