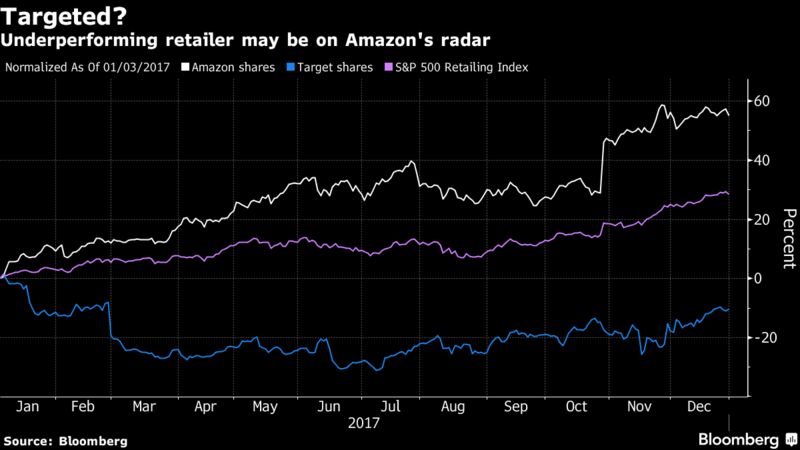 Amazon.com Inc.’s shake-up of the retail landscape may not be over, according to one well-known technology analyst.

“Target is the ideal offline partner for Amazon for two reasons, shared demographic and manageable but comprehensive store count,” Munster wrote, noting both companies focus on mothers and families. “Getting the timing on this is difficult, but seeing the value of the combination is easy.”

Market-share numbers suggest a deal would be approved by regulators, and Wal-Mart Stores Inc. would still have a larger share than an Amazon-Target combination, Munster said. He estimated a take-out valuation of $41 billion, or a 15 percent premium to Target’s value. Target shares rose as much as 3.7 percent Tuesday in New York, while Amazon gained 1.6 percent.

“Investors would view this as Amazon taking over the world and that’s a good thing,” Munster said in an interview on Bloomberg Radio.

A Target representative declined to comment on the report. Amazon didn’t immediately respond to a request for comment.

Munster, 46, co-founded Loup Ventures, a venture capital firm focused on virtual reality and artificial intelligence, in early 2017. Before that, he’d worked for 21 years as an analyst at Piper Jaffray Cos., where he was known for his accuracy in predicting Apple Inc.’s financial potential.

Prognosticating about Amazon’s next deal has become a common theme for analysts. In November, DA Davidson analyst Tom Forte wrote that Lululemon Athletica Inc. may be attractive to the online retailer, while Citigroup analyst Paul Lejuez recently catalogued a host of potential targets, including Abercrombie & Fitch Co., Bed Bath & Beyond Inc. and Advance Auto Parts Inc.

Still, Amazon may not just be interested in retail deals. Last month, CFRA bank analyst Ken Leon wrote that he foresees the Internet company buying a small- or mid-sized bank in 2018.

PrevPreviousSouthern border agent killed, another injured while on patrol in Texas – Trending Stuff
NextDonald Trump attacks Theresa May over her criticism of his far-right retweets – Trending StuffNext