The lights flickered on shortly before midnight, after an exhausting day for travelers, that had left thousands stranded in dark terminals and on planes sitting on the tarmac. A ground stop in Atlanta disrupted air travel across the United States and led to cancellations of more than 1,000 flights in and out of the airport.

Shortly after power came back, some passengers lined up at security screening, hoping to beat the crowds as the TSA checkpointsre-opened at 3:30 a.m.The airport could see a logjam of passengers and delays as more than 400 flights have been canceled Monday.

The outage, which affected all airport operations, started with a fire in a Georgia Power underground electrical facility, Atlanta Mayor Kasim Reed said. The electrical fire’s intensity damaged two substations serving the airport, including the airport’s “redundant system” that should have provided backup power, Reed said.

Atlanta is the heart of the US air transport system, and the disruption led to 1,180 flight cancellations to and from the airport Sunday, according to flight tracking service FlightAware. 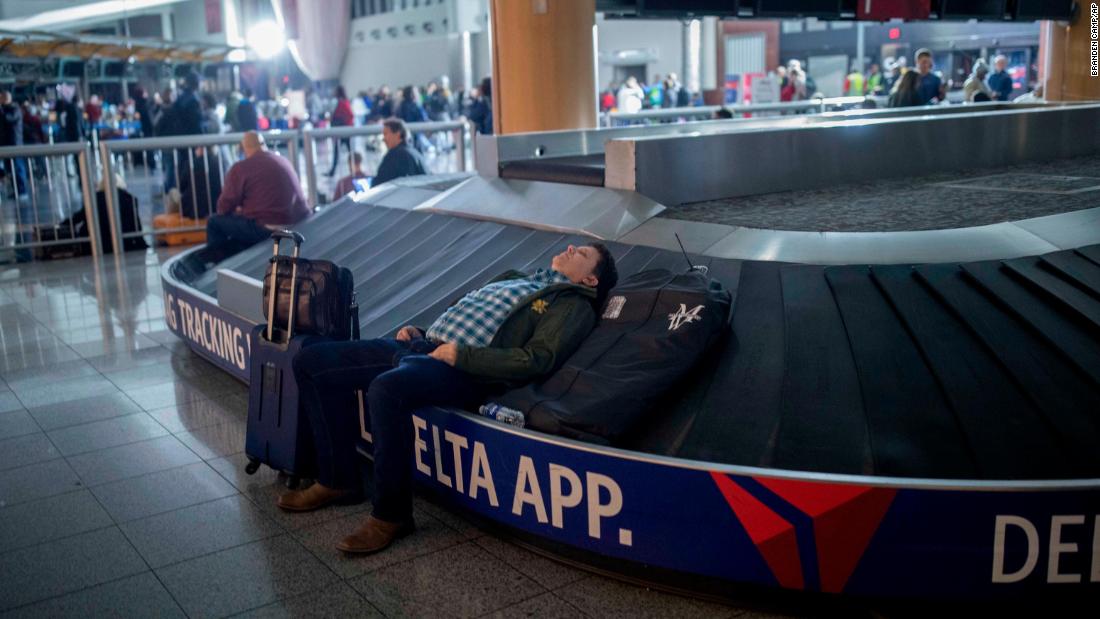 Delta, which has its largest hub in Atlanta, canceled 300 flights Monday, most of which are morning, inbound flights to Hartsfield-Jackson. Delta tweeted that it expects flight schedules “to return to normal by Monday afternoon.”
But weather could complicate matters in the morning as a dense fog advisory is in effect.

“There’s a lot of other issues downstream to all other airports, where flights should be arriving and departing, connecting to Atlanta, that are going to be disrupted as well. So we’re talking possibly millions of people disrupted over the next few days and it is certainly not going to be fixed in one day,” he said.

Cause of fire unknown

At 12:38 p.m., Georgia Power noticed outages in the system that were traced to a fire in underground tunnels where the airport’s electric system lives, spokeswoman Bentina Terry said. The fire caused multiple faults that led to the full blackout at 1:06 p.m.

When lights went out at the airport

The fire’s intensity prevented Georgia Powercrews from immediately being able to access the tunnels and work on restoring power, Reed added. By 3:30 p.m., fire crews were able to contain the fire and started to work on restoring power. The cause of the fire has yet to be determined, but nothing suggests it was set deliberately, he said.

“We certainly understand that the outage has caused frustration and anger and we are doing everything that we can to get folks back home right away,” Reed said at a Sunday night news conference.

Georgia Power said in a statement that its equipment — a piece of switchgear — which was in an underground electrical facility, could have failed and started a fire. The incident is still being evaluated, according to the utility.

The blackout led the Federal Aviation Administration to declare a ground stop at the airport, preventing Atlanta-bound flights in other airports from taking off and causing inbound flights to be diverted.

Inside the airport, the outage cut power in the terminals, leaving passengers stranded in the dark as they stood in line at gates and security checkpoints. An estimated 30,000 people were affected by the power outage, Reed said. 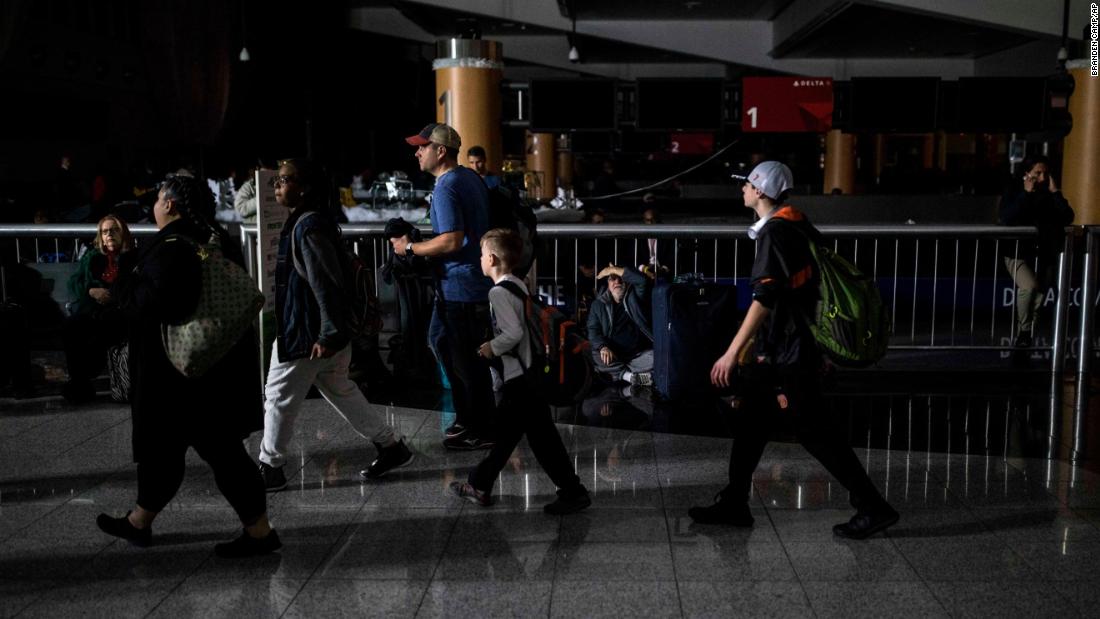 People used flashlights on their phones to see where they were going, said passenger Heather Kerwin, an Atlanta resident bound for New York.

“There were a few emergency lights on, but it was really dark — felt totally apocalyptic,” she said. “I decided to get the hell out of there.”

Some passengers told CNN that airport and airline staff offered no updates as hours passed, leaving people scanning their phones and tablets for information. Stores stopped serving food and passengers were evacuated to alleviate crowding.

The city of Atlanta opened the Georgia International Convention Center and offered shuttle services there for stranded passengers who needed a place to stay for the night, according to the city’s verified twitter account. Chick-fil-A supplied food to passengers, although the chain is closed on Sundays.

The outage left passengers sitting in planes on the tarmac for hours.

Jodi Green’s Delta flight from the Bahamas landed at 1:15 p.m. ET Sunday. Seven hours later, she was still on the plane. Green said the pilot told passengers that other flights that had ran out of fuel were evacuated before theirs. Despite the circumstances, she said, order prevailed.

“People are calm, laughing, joking,” she said. “I’m amazed I’ve been able to sit here and not lose my mind.”

CNN’s Betsy Klein spent nearly seven hours in a plane on the tarmac, waiting to move. At one point, the crew said 92 planes were stuck on the tarmac, Klein said. People maintained composure as food and drinks ran out, but by hour seven, patience was wearing thin.

When she finally deplaned around 9 p.m. it was sweltering inside the airport, she said. It was unclear who was in charge and people were lying on the floor and on baggage claim belts.

Delta, which has its headquarters in Atlanta, canceled more than 900 flights Sunday. The airline urged passengers scheduled to fly on Monday to check their flights. 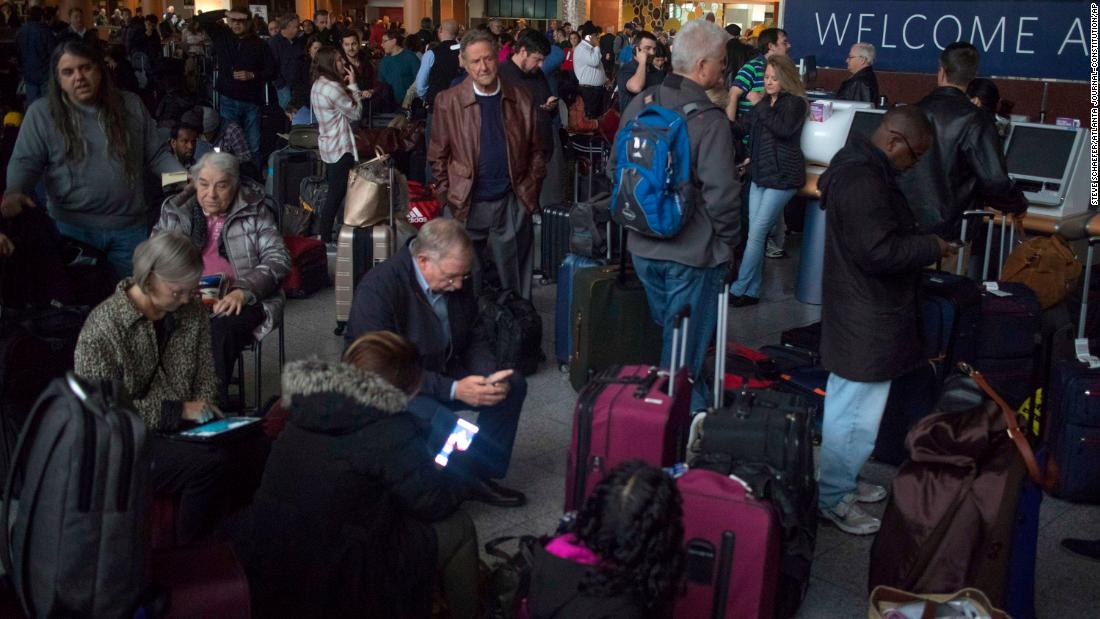 Correction: A previous version of this story misstated when the FAA grounded flights at Atlanta’s Hartsfield-Jackson International Airport. Flights were grounded shortly after the airport lost electricity at 1 p.m. ET.