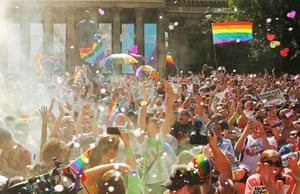 A crowd celebrates the results of the postal survey in front of the State Library of Victoria Wednesday. Photograph: Scott Barbour/Getty Images

When Turnbull took the prime ministership from conservative predecessor Tony Abbott in September 2015, he retained the Coalitions commitment to hold a national plebiscite on same-sex marriage before changing the law.

Labor, the Greens and other opposition parties blocked the proposed plebiscite in the Senate in November 2016 and August 2017, leading the Turnbull government to launch a $122m voluntary national postal survey to fulfil its election commitment to give Australians a say.

In a bruising three-month campaign, opponents of marriage equality including the Australian Christian Lobby, and the Catholic and Anglican churches in Sydney, claimed same-sex marriage would have far-reaching negative consequences for gender education. Former prime ministers Tony Abbott and John Howard warned that religious freedom and freedom of speech were at risk.

The yes camps Equality Campaign combined with moderate Liberals, Labor, the Greens, unions and progressive campaign organisation Get Up to argue that same-sex marriage was a matter of equality and fairness.

The campaign featured everyday Australians, their friends and families, emphasising that the only question was whether LGBTI Australians should be able to marry the one they love.

Despite assertions from Turnbull that the survey would be overwhelmingly respectful, the campaign has been marred by homophobic incidents and campaign material which continued largely unabated despite a special law passed to apply electoral law safeguards to the survey, such as authorisation requirements for campaign materials.

The campaign also featured two unsuccessful high court challenges against the expenditure of $122m for the survey, as marriage equality advocates fought to prevent the poll seen as an affront because it determined LGBTI peoples equality before the law by a majoritarian vote.

Public polling throughout the campaign showed consistent support for marriage equality and weekly estimates showed the survey was on-track for a record turnout.

The no campaign took increasingly bizarre turns, with Abbott using an assault that even his attacker said had nothing to do with marriage to rally Australians to his cause, and conservatives attempting to use US rapper Macklemores performance of his hit Same Love at the rugby league grand final to claim the national campaign they called for had inappropriately politicised Australian institutions.

The cross-party bill will be debated in the Senate on Thursday and the parliamentary sitting week beginning 27 November, with supporters of marriage equality aiming to pass a bill through both houses of parliament before they rise on 7 December.