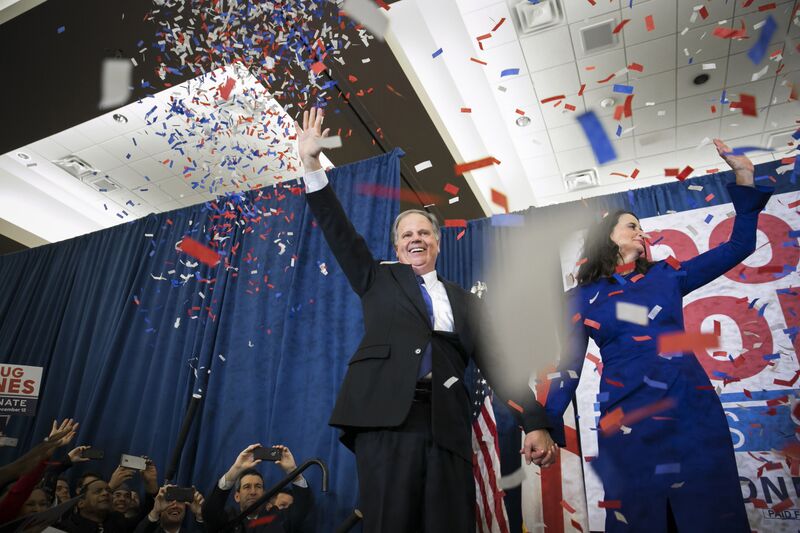 Democrat Doug Jones delivered a stunning upset defeat to Republican Roy Moore in a U.S. Senate race in deep-red Alabama that had split the GOP even before its controversial nominee was accused of inappropriate conduct with teenage girls.

Jones won with 49.9 percent of the vote to Moore’s 48.4 percent, with all precincts reporting, the Associated Press said. Moore, however, didn’t immediately concede and his campaign manager, Bill Armistead, said the results were too close to “make a final decision on the outcome.”

Jones had been behind most of the night, and when he slowly took the lead and was declared the winner, the crowd at his post-election party at a Birmingham hotel erupted in jubilation, with volunteers weeping and hugging one another.

In his victory speech, Jones said he was “overwhelmed” by the result, as Republicans absorbed a shocking loss in a state that hasn’t sent a Democrat to the Senate since 1992 and that voted overwhelmingly for President Donald Trump last year.

Jones’s victory cuts the GOP’s Senate majority to just 51-49 that will make it even harder for the party to enact its agenda.

Jones gained in polls following allegations that Moore initiated a sexual encounter with a 14-year-old girl, assaulted a 16-year-old and pursued relationships with other teenage girls while he was in his 30s. Moore, who was twice removed as chief justice of the Alabama Supreme Court for defying federal court rulings, denied the claims.

The GOP will have to hurry to get its massive tax-cut legislation through Congress before Jones takes office, no later than Jan. 3.

The race underscored the ongoing intraparty war between conservative upstarts and the establishment Republicans. Moore was backed by Trump and his former chief strategist Steve Bannon, while Senate Majority Leader Mitch McConnell of Kentucky and other Senate Republicans opposed him.

Congratulations to Doug Jones on a hard fought victory. The write-in votes played a very big factor, but a win is a win. The people of Alabama are great, and the Republicans will have another shot at this seat in a very short period of time. It never ends!

On Twitter, Trump congratulated Jones “on a hard fought victory.”

“The write-ins played a very big factor, but a win is a win,” the president wrote.

Finger-pointing over Moore’s defeat started minutes after the race was called, with Andy Surabian, a senior adviser to the pro-Trump Great American Alliance, saying the blame lay squarely at the feet of the Senate’s top leader.

“Mitch McConnell and the Republican establishment got their wish: they successfully delivered Alabama to a liberal Democrat,” Surabian said.

Steven Law, the president of the McConnell-aligned Senate Leadership Fund, fired back in a statement that called the outcome a “brutal reminder” that the quality of a candidate counts.

“Not only did Steve Bannon cost us a critical Senate seat in one of the most Republican states in the country, but he also dragged the president of the United States into this fiasco,” Law said in a statement.

Moore’s defeat means the party won’t be tagged with his reputation while seeking to retain control of the House and Senate in November 2018. And McConnell will have a slightly easier time running the Senate, given that Moore had promised to try to oust him from his leadership position.

What might have been an uneventful race in a state Trump won with 62 percent of the vote in 2016 instead appeared too close to call in the days leading up to the vote. Poll averages showed Moore with a slight lead, while a trio of surveys released Monday showed Moore up by 9 percentage points, Jones up by 10 points, and both candidates tied.

After the vote is certified, Jones will be sworn in to the Senate seat formerly held by Attorney General Jeff Sessions. Luther Strange was appointed to fill the seat last February, but lost to Moore in a September primary vote even though Trump had reluctantly joined McConnell in supporting Strange.

Until the allegations involving teenagers were reported, Moore had a wide lead despite a controversial past. Moore, 70, was removed from the state’s top court in 2002 for refusing to remove a Ten Commandments monument from the state judicial building and suspended in 2016 for ordering judges to ignore the U.S. Supreme Court decision that legalized same-sex marriage.

The Republican also argued that a Muslim shouldn’t be allowed to serve in the House because of his religion, has criticized the science of evolution, and wants to make homosexual conduct a crime and restore a ban on gays serving in the military.

Jones, 63, was the lead prosecutor in the 2002 conviction of two Ku Klux Klan members for the 1963 bombing of the Sixteenth Street Baptist Church in Birmingham. The bombing killed four girls and injured 22 others.

He spent the final days of the race shoring up support among blacks, the core of Alabama’s Democratic base, by campaigning with Representative John Lewis, a Georgia Democrat and civil rights leader, among others. Jones also sought support from moderate Republicans who found Moore too controversial.

“This was about either decency or indecency will win,” said Corleen Farley, a 63-year-old Birmingham resident who attended the post-election party. “Either love will win or hate will win. We had to do this and we did it. I’m about to cry because I never would have thought it would have happened in Alabama.”

Tuesday’s election serves as a warning to Republicans who must decide next year whether they want candidates backed by establishment party leaders, or populist conservatives who often criticize top GOP elected officials for making too many compromises and not getting enough done.

Bannon, who campaigned with Moore twice in the week leading up to the election, has said he will back primary challenges against every incumbent Republican he says is disloyal to the president. He described the Alabama race as a choice between “the Trump miracle” and the “nullification project” in Washington.

Alabama’s senior senator, Republican Richard Shelby, said he wouldn’t vote for Moore after the candidate was accused of initiating a sexual encounter with the 14-year-old girl. “That was enough for me,” Shelby said Sunday on CNN. Instead, he said he wrote in the name of a “distinguished Republican.”

Arizona Senator Jeff Flake donated $100 to Jones’ campaign, and Nebraska Senator Ben Sasse said he would stop assisting the National Republican Senatorial Committee if it resumed fundraising for Moore — as the Republican National Committee did after Trump endorsed the candidate. The NRSC chairman, Senator Cory Gardner of Colorado, said the committee would “never” support Moore.

For Democrats, who lost several House special elections in red states earlier this year, the way Jones positioned himself could serve as a model. Jones ran as a moderate, worked to distance himself from the national party, and managed to raise and spend more money than his opponent, partly because of Moore’s controversial record.