Suspect, 29, is in hospital after being shot by officer as mayor says attack being treated as a particularly cowardly act of terror 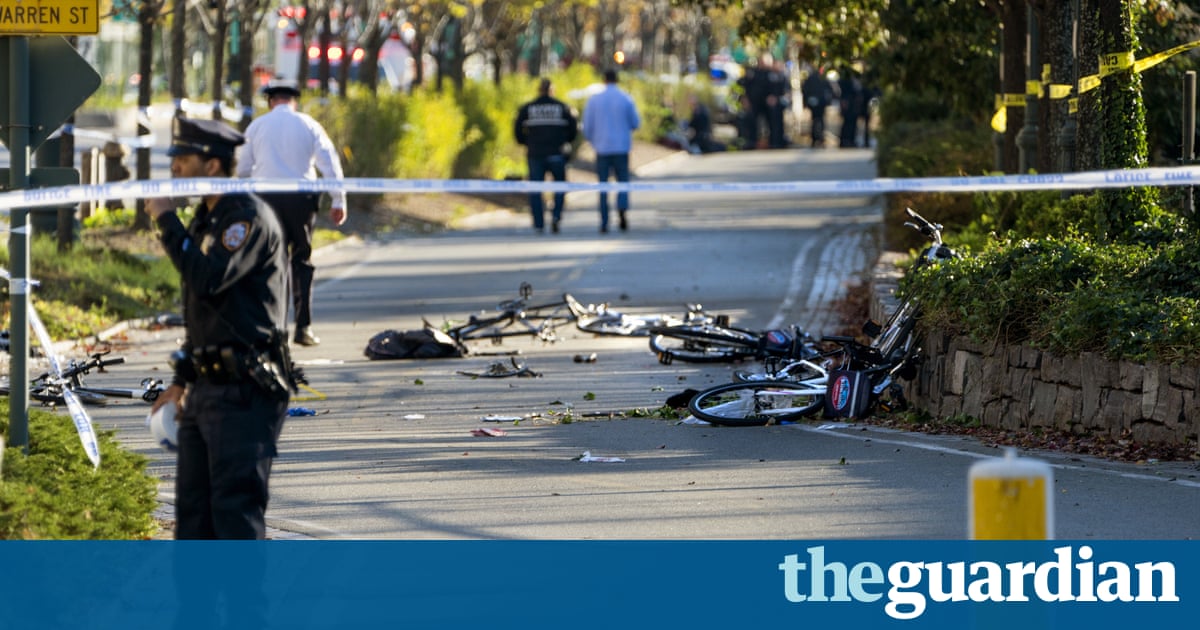 Eight people have been killed and more than a dozen injured after a man drove a truck nearly a mile down a bike path in lower Manhattan on Tuesday, striking pedestrians, cyclists and a school bus.

New York Citys mayor, Bill de Blasio, said the incident was being treated as a particularly cowardly act of terror. He said a police officer assigned to the area stopped the attacker by shooting him in the stomach.

After smashing into the school bus, injuring two adults and two children, the 29-year-old suspect exited the truck displaying imitation firearms. Witnesses have said the suspect was shouting Allahu Akbar, Arabic for God is great, before he was shot by police, according to the New York police department (NYPD). The suspect was arrested, and a paintball gun and a pellet gun were recovered at the scene.

The suspect underwent surgery and was in critical condition but was expected to survive. Officials who werent authorised to discuss the investigation and spoke on the condition of anonymity identified the attacker as 29-year-old Sayfullo Saipov, an Uzbek citizen who came to the US legally in 2010. Saipov has a Florida driving licence but may have been living in New Jersey, reports said.

Uber said Saipov was one of its drivers who had passed a background check and had been actively driving for the ride-hailing app for more than six months.

Police said the truck drove south after entering a pedestrian and bicycle path along the Hudson river on the south-west side of Manhattan, where it struck a number of people, coming to a stop near Stuyvesant High school, not far from the One World Trade Center site and Rockefeller Park.

Six men were pronounced dead at the scene on the cycle lane and two other people were dead on arrival at hospital.

It is a very painful day in our city, De Blasio said.

The victims include a Belgian citizen and five Argentinians. The five men from Argentina Hernn Diego Mendoza, Diego Enrique Angelini, Alejandro Damin Pagnucco, Ariel Erlij and Hernn Ferruchi were part of a group of school friends who travelled to New York to celebrate the 30th anniversary of their graduation. Another member of the group, Martin Ludovico Marro, remained in hospital.

The justice department said in a statement that a joint terrorism task force that included the FBI, the NYPD and others was investigating the attack.

There have been multiple and conflicting reports of a note and/or flag showing support for Isis had been found in the truck used in the attack. The reports have not been officially confirmed.

The New York Times reported that handwritten notes in Arabic near the truck indicated allegiance to the Islamic State, while CNN said a note was written in English, also indicating support for Isis, and was found inside the truck. Others including the Daily Mail claimed an Isis flag was found in the truck.

A woman from Cincinnati, Ohio, contacted by the Guardian, who identified herself as Dilfuza Iskhakova, said Saipov had stayed at her home for several months about six years ago, after arriving in the US from Uzbekistan. He seemed like a nice guy, but he didnt talk much, said Iskhakova. He only went to work and came back. He used to work at a warehouse.

Iskhakova said Saipov had been applying for a green card during this time. Ohio state records show he registered a business involving vehicles to her home in May 2011. Iskhakova said her family lost contact with Saipov in recent years. She said she thought he had moved from Ohio to Florida, and then to the New York region, and that he had a wife and two young daughters.

She said she did not know if Saipov was religious. Hes from my country, Iskhakova said. His father knows my husband, and sent Sayfullo here because he didnt know anyone.

Officials in New York said additional resources were deployed around the city, where children would be on the streets late into the evening to celebrate Halloween. The citys landmark Halloween parade in Greenwich Village, about six blocks from where the rampage began, continued as usual.

At a news conference, the New York governor, Andrew Cuomo, said these resources were being deployed out of an abundance of caution and that there was no indication of additional threats.

Donald Trump tweeted about the incident: In NYC, looks like another attack by a very sick and deranged person. Law enforcement is following this closely. NOT IN THE U.S.A.!