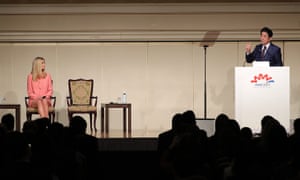 As a professional with three young children, and despite the help I was able to have at home, I too have experienced the struggles of balancing competing demands of work and family.

Acknowledging her fortunate upbringing, she added: Because of the opportunities Ive had my whole life, I felt an obligation to seize this moment and join the administration.

Earlier, Japans prime minister, Shinzo Abe, lauded his own record on getting more women into the workplace and improving childcare provision, as part of the growth-oriented womenomics initiative he unveiled early in his premiership.

Noting that the number of Japanese women in managerial positions had doubled over the past five years albeit from a very low base Abe said his countrys male-dominated corporate culture was becoming more inclusive.

Weve put our full strength into creating an environment where its easy for women to work, he said. I really feel that Japan has come a long way.

Abe, though, was speaking a day after the Economic Forums global gender equality rankings showed Japan had slipped four places to 114th out of 144 countries, mainly due to the poor representation of women in parliament.

Japan fell three places overall from last year and remains at the bottom of the G7 nations. In the political category, it plunged 20 places from last year to 123rd. Last months election increased female representation in the lower house by only two seats compared with the last election in 2014.

Now, just 47 or just over 10% of the 465 MPs in Japans lower house are women. The upper house fares better, with women occupying about a fifth of the seats.

Men also dominate the upper echelons of Japans business world. Only 3.7% of executives at listed companies are women, according to government figures.

Ivanka Trump singled out the poor representation of women and minorities in science, technology, engineering and maths, saying the male-dominated sectors were still moving in the wrong direction.

Donald Trump arrives in Japan on Sunday at the start of a 12-day visit that includes stops in South Korea, China, Vietnam and the Philippines. His daughter had been expected to accompany him to Seoul and Beijing, but recently pulled out, saying she would return to the US to promoted the administrations tax reforms.