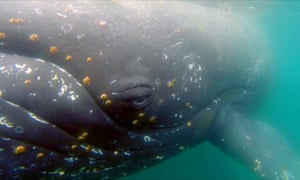 A humpback whale dives for krill in Wilhelmina Bay, off the Antarctic Peninsula. The creeping expansion of industrial fishing is targeting the one species on which practically every animal in the Antarctic relies: krill. Photograph: Charles Littnam/WWF/EPA

All of us who live on this planet are the guardians of these environments, not only to protect the wildlife that lives in them, but because the health of our oceans sustains our planet and the livelihoods of billions of people.

Heres the good news. The tide of history is turning. We on the blue planet are finally looking seriously at protecting the blue bits. Just a few months ago, in a stuffy room far from the sea, governments from around the world agreed to start a process to protect them: an ocean treaty.

This ocean treaty wont be agreed until at least 2020, but in the meantime momentum is already building towards serious and binding ocean protection. Just last year a huge 1.5 million sq km area was protected in the Ross Sea in the Antarctic. In a turbulent political climate, it was a momentous demonstration of how international cooperation to protect our shared home can and does work.

Over the next two weeks, the governments responsible for the Antarctic are meeting to discuss the future of the continent and its waters. While limited proposals are on the table this year, when they reconvene in 12 months time they have a historic opportunity to create the largest ever protected area on Earth: an Antarctic Ocean sanctuary. Covering the Weddell Sea next to the Antarctic peninsula, it would be five times the size of Germany, the country proposing it.

The Antarctic is home to a great diversity of life: huge colonies of emperor and Adlie penguins, the incredible colossal squid with eyes the size of basketballs that allow it to see in the depths, and the largest animal on the planet, the blue whale, which has veins large enough for a person to swim down.

The creeping expansion of industrial fishing is targeting the one species on which practically every animal in the Antarctic relies: krill. These tiny shrimp-like creatures are crucial for the survival of penguins, whales, seals and other wildlife. With a changing climate already placing wildlife populations in the Antarctic under pressure, an expanding krill industry is bad news for the health of the Antarctic Ocean. Even worse, the krill industry and the governments that back it are blocking attempts at environmental protection in the Antarctic.

Ocean sanctuaries provide relief for wildlife and ecosystems to recover, but its not just about protecting majestic blue whales and penguin colonies. The benefits are global. Recovering fish populations spread around the globe and only now are scientists beginning to fully understand the role that healthy oceans play in soaking up carbon dioxide and helping us to avoid the worst effects of climate change. Sanctuaries encourage vital biodiversity, provide food security for the billions of people that rely on our oceans, and are essential to tackling climate change. Our fate and the fate of our oceans are intimately connected.

Creating the worlds largest ever protected area, in the Antarctic Ocean, would be a signal that corporate lobbying and national interests are no match for a unified global call for our political leaders to protect what belongs to us all. The movement to protect over half our planet begins now, and it begins in the Antarctic.

John Sauven is director of Greenpeace