“Fires are breaking out across the so. Cal. Region… Be fire safe. Firefighters are working very hard to minimize damage to property. Evacuations are taking place in many places in Southern California,” the Ventura County Fire Department tweeted.

Unpredictable winds and extremely dry brush, victim of little rainfall over the past three months, fueled at least five blazes.

“We simply don’t know what this fire will do,” Mayor Eric Garcetti said.

Some homes were ablaze in the northern part of Ventura, a city of more than 100,000 on the Pacific coast. More than a quarter of the city’s residents had been told to get out. 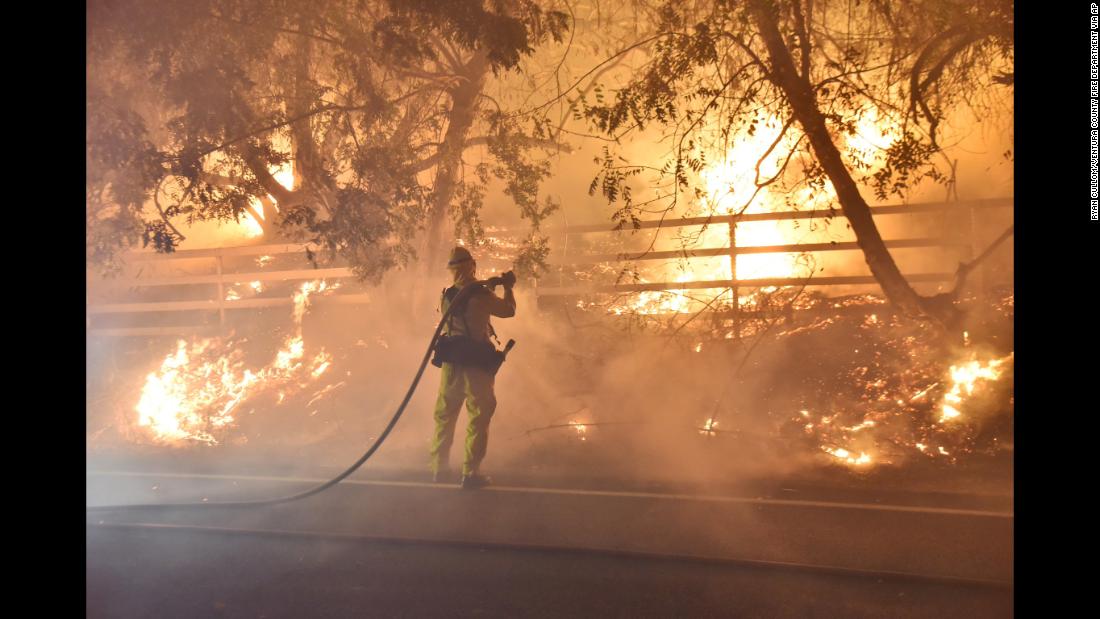 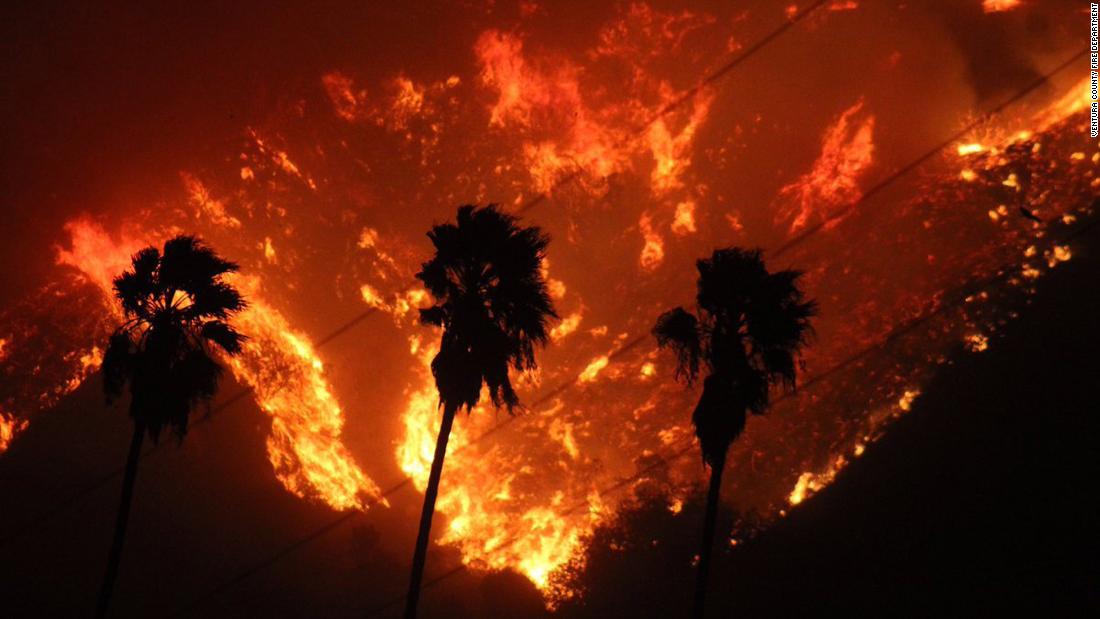 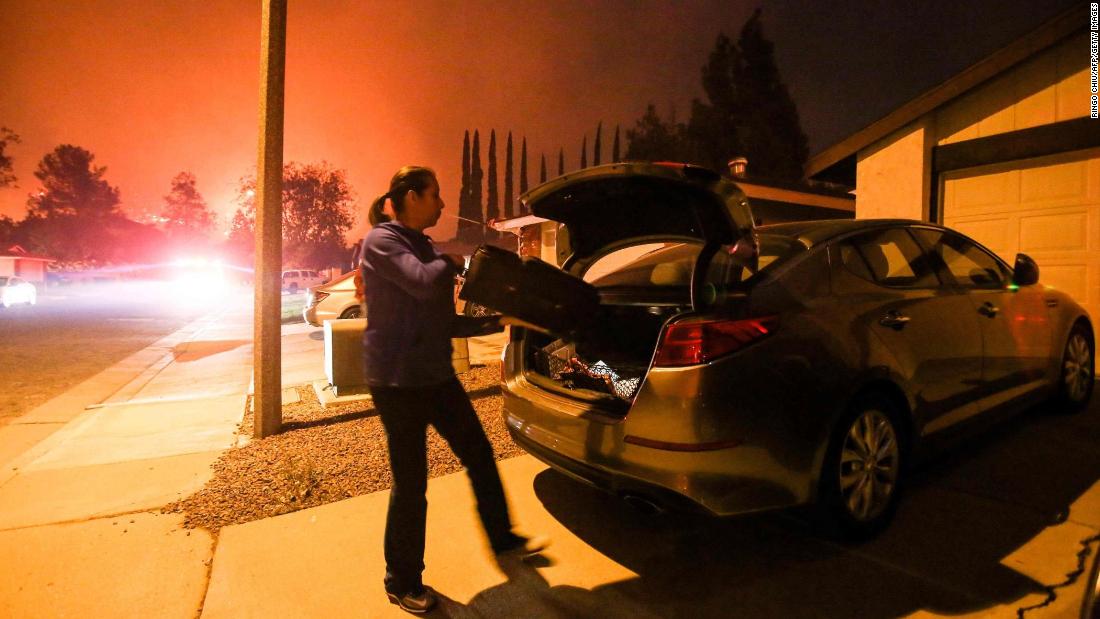 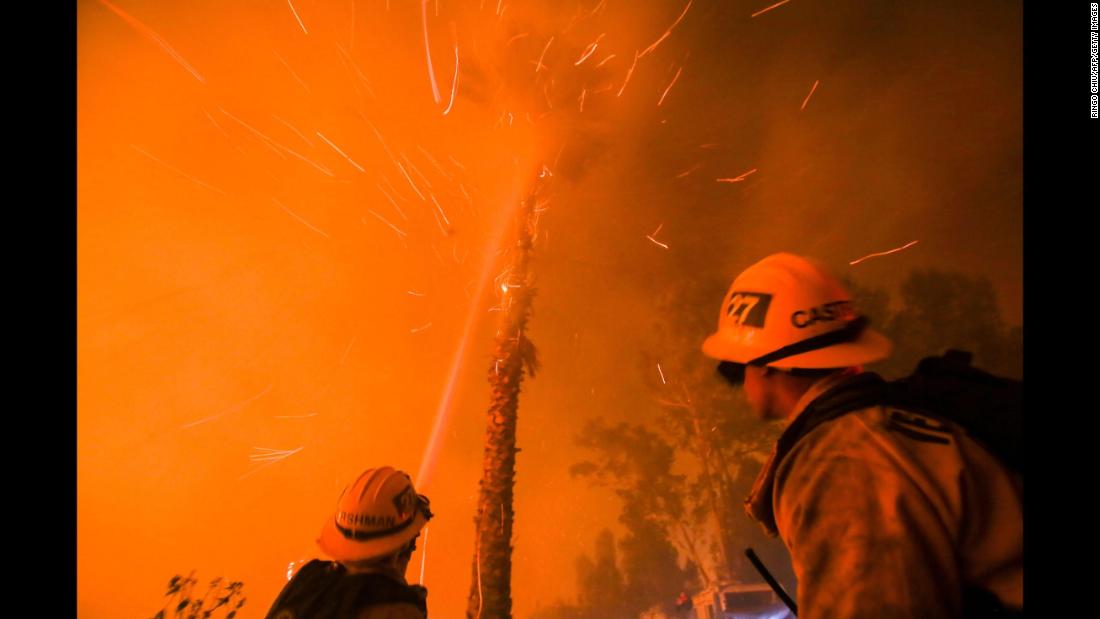 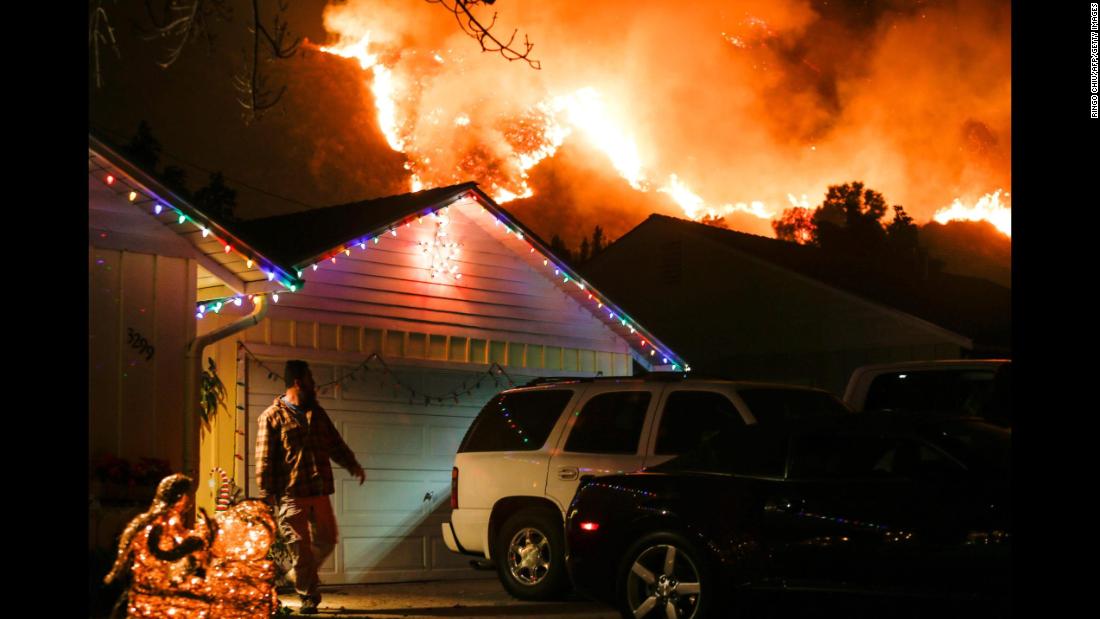 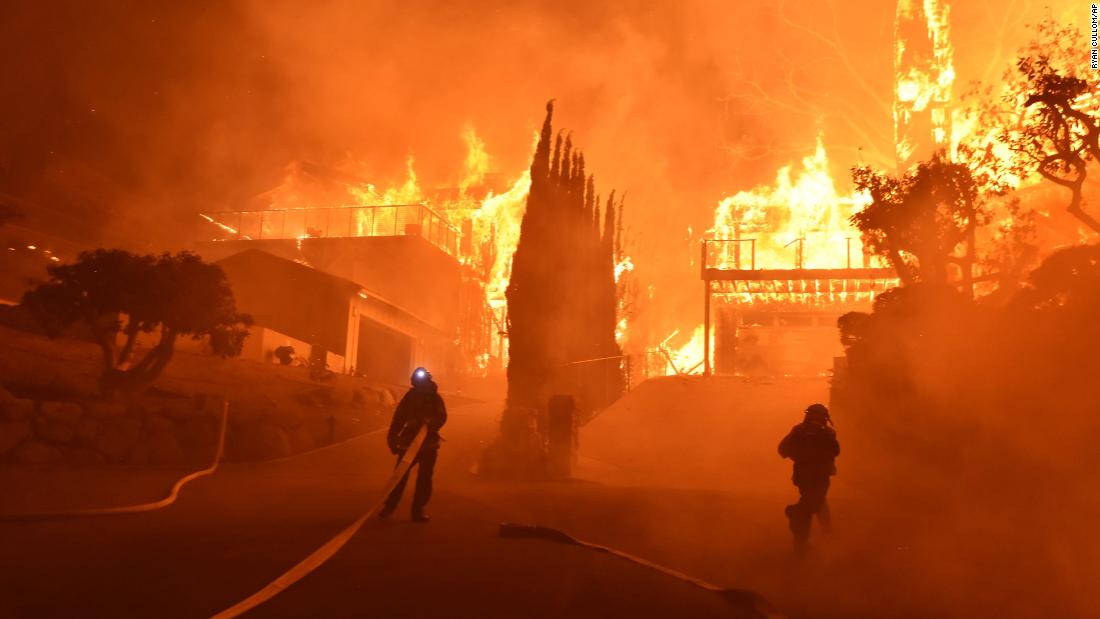 • Mass exodus: Garcetti said about 150,000 people in Los Angeles were affected by evacuation orders for the Creek fire near Sylmar and Lake View Terrace. 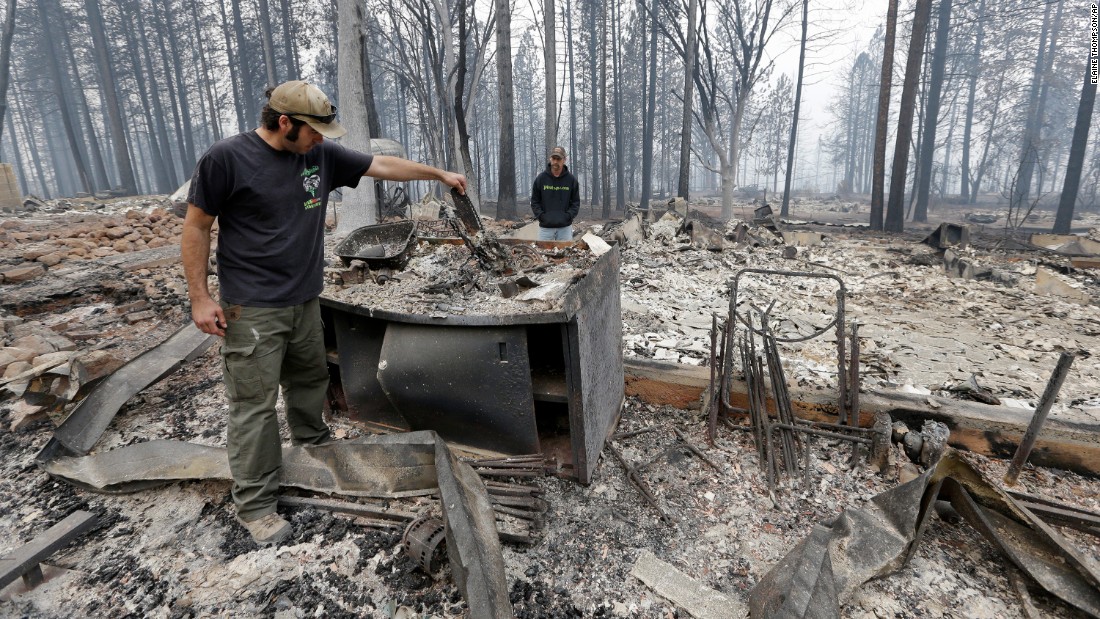 • Please go: About 38,000 people were under mandatory evacuation in Ventura County as fire officials warned the powerful winds could push flames farther into the city of Ventura. One official said, “It’s important that you heed the advice to evacuate, please.”

• Responders hurt: Two firefighters who were injured at the site of the Creek fire were “doing fine,” Los Angeles County Fire Chief Daryl Osby said. No civilians have been hurt, he said.

•Blazing fast: The large fire, known as the Thomas fire, was burning at nearly an acre per second. At that speed, it would have covered Manhattan’s Central Park in about 14 minutes. 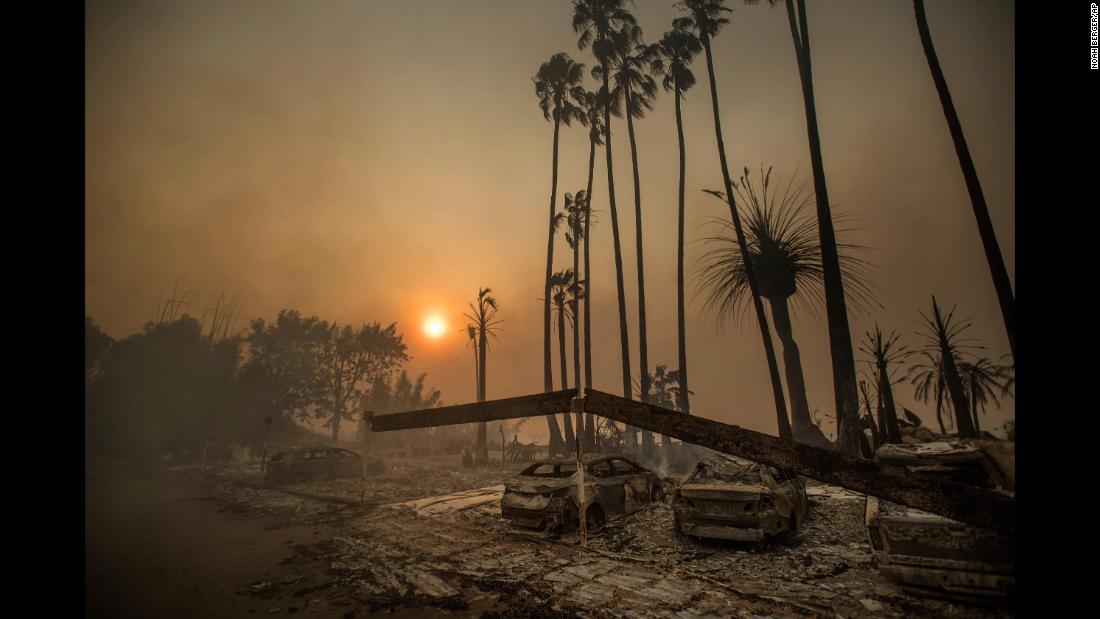 • Other fires: The Rye fire near Santa Claritain Los Angeles County had grown to about 5,000 acres. In San Bernardino County, a 100-acre and a 50-acre fire sprang up.

The Thomas fire jumped to thousands of acres with startling speed as Santa Ana winds, blowing as fast as 50 mph, carried its embers. It engulfed dry chaparral and climbed through steep terrain.

Satellite images show how fast it lit up neighborhoods at night.

The winds were part of the season’s “strongest and longest” Santa Ana event.The Santa Anas are strong, dry winds that high-pressure systems push from east to west, from the mountains and desert areas down into the Los Angeles area.

Wind gusts reached between 35 to 50 mph, with relative humidity at 3 to 10%, NWS incident meterologist Rich Thompson said. The winds were expected to decrease Tuesday night, but are expected to kick back up late Wednesday into Thursday. A red-flag warning is in effect until 8 p.m. PT on Friday.

“We expect to be out here all week fighting and containing this fire,” Garcetti, the Los Angeles mayor, said of the Creek fire.

Dry conditions won’t help. The county is in a period of moderate drought, the US Drought Monitor says.

‘I saw a skyscraper inferno of smoke’

Erik Nasarenko, a Ventura city councilman and former mayor,said he was at a council meeting Monday evening when the city manager told him his neighborhood was being evacuated. 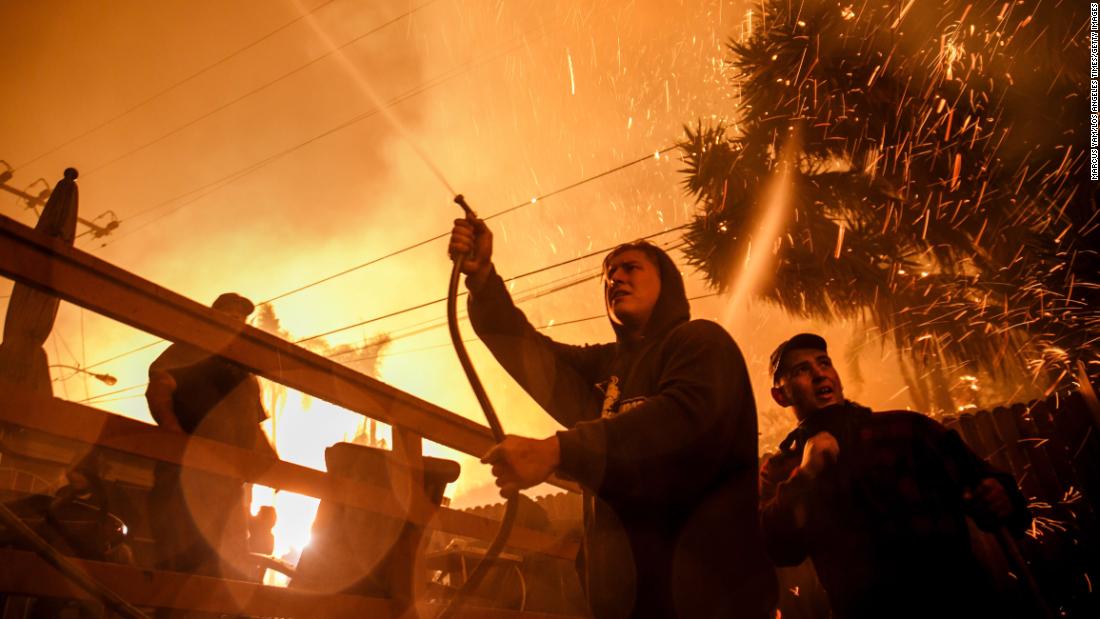 “I left the meeting, raced home, and I saw a skyscraper inferno of smoke,” Nasarenko said. After collecting important documents from his home, he was about to pick up family photo albums when approaching flames made him reconsider.

“I saw the orange glow, and I just said, ‘Let’s go.’ ” Nasarenko said he, his wife and two children drove to his parents’ home near San Fernando.

He doesn’t yet know the fate of his house, but he said neighbors told him they saw nearby structures on fire.

A knock on the door

Orange flames glow threateningly close to a Ventura neighborhood in video recorded by Eric Rosenberg. He and his wife were alerted to the fire around 12:30 a.m. when a neighbor knocked on his door.

“(The) power was out and (my) phone’s internet was out,” he said. “I texted a friend a mile or so away who gave me more info.”

“We had packed the car at about 1 a.m. and left right away when the police said it was time to go” three hours later, he said.

Rosenberg and his wife are currently at his parents’-in-law home in Carpinteria, about 25 minutes from their home. “We can see the billowing smoke clouds in the distance,” Rosenberg said.

The fire burned down power lines, at one point leaving more than 260,000 homes and businesses without power in Ventura County and neighboring Santa Barbara County, said Susan Cox, a spokeswoman for Southern California Edison.

By early Tuesday, power had been restored to all but 20,000 customers — but more outages were possible because flames were burning along power transmission paths, Cox said.

As the fire spread, the nearby hills glowed bright orange while residents in Santa Paula threw belongings into cars as they began to evacuate, according to video footage from CNN affiliates.

About 1,000 firefighters were battling the blaze or heading to the area to help, said county fire engineer Macklin.

“I’ve never seen a fire burn down so many structures so fast in my (30-year) career,” Macklin said.

One airborne firefighter tweeted dramatic video of the Creek Fire, showing choking smoke and at least one tall tree engulfed in flames.

In some areas, the winds made it impossible for firefighters to use airplanes to attack the fire, officials said.