George W Bush caused far more harm to the country and planet than Trump has so far, and maybe ever will 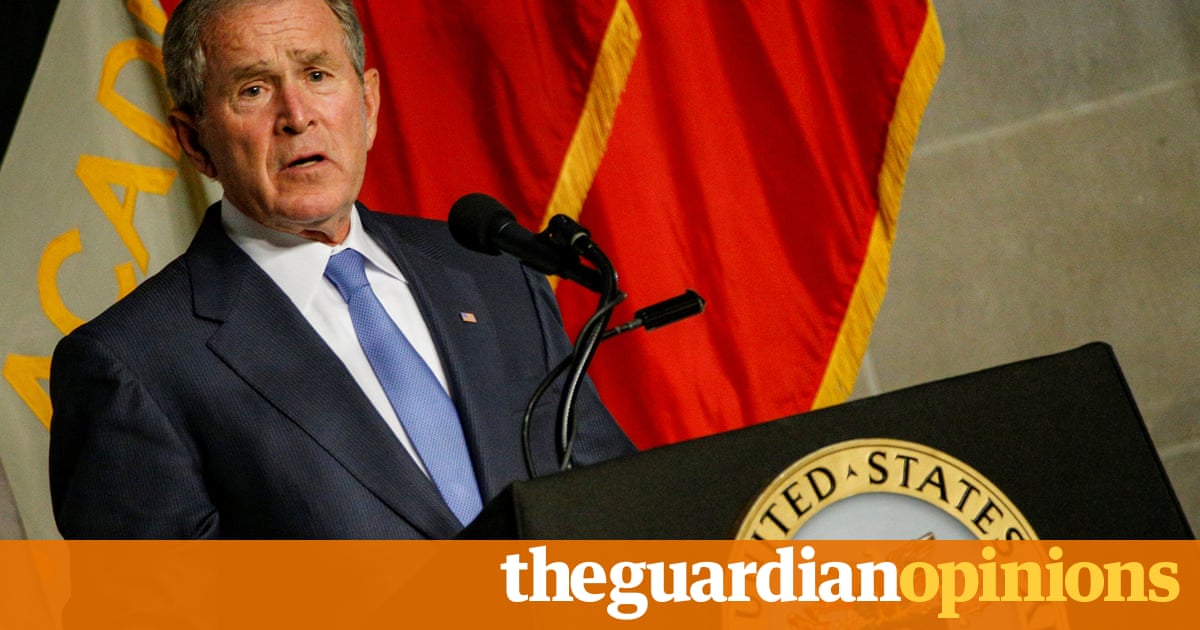 For liberals across the spectrum, the temptation is real to lionize George W Bush now. Donald Trump is our child-king, slobbering over the country and embarrassing us all. He is parody made real, a lackey for rightwing billionaires everywhere. Its not hard to find a talking head on the left who will say he is, without question, the worst president America has ever had.

But dont make that easy mistake. Especially not now as Bush, our 43rd president, rears his head from retirement to denounce his bombastic successor. At a speech in New York on Thursday, Bush set Democratic heartstrings aflutter when he declared that weve seen our discourse degraded by casual cruelty.

Bullying and prejudice in our public life sets a national tone and provides permission for cruelty and bigotry, he added. The only way to pass along civic values is to first live up to them.

Bush delivered these words without mentioning Trump by name. The last Republican before Trump to serve as president, Bush lamented that America has seen nationalism distorted into nativism, forgotten the dynamism that immigration has always brought to America.

We see a fading confidence in the value of free markets and international trade, forgetting that conflict, instability and poverty follow in the wake of protectionism. Weve seen the return of isolationist sentiments, forgetting that American security is directly threatened by the chaos and despair of distant places.

Devoid of context, Bush has a point. Trump is a bully who permits prejudice and cruelty. He doesnt have much regard for internationalism. His impulses are isolationist in nature.

What is ironic here is that Bush will undoubtedly be elevated to the status of a pious, gray-haired warrior speaking out in defense of the republic he once led, a talisman of decency for DC amnesiacs. He will be cheered as another brave Republican defying a president of his own party, his past rendered meaningless.

There is a certain strain of conventional political wisdom exploited by the likes of Bush. It prizes optics over action, appearances over reality. Bush was a soft-spoken president, a nice enough seeming man, and typically politically correct. Well-coiffed and gimlet-eyed, he resembled a screenwriters conception of an American president.

And he caused far more harm to the country and planet than Trump has so far, and maybe ever will. It was under Bush that America invaded Iraq, murdered hundreds of thousands of civilians, and destabilized the Middle East so thoroughly that it may take the entire 21st century to recover.

More than 4,000 American soldiers died. He stocked his cabinet with warmongering neoconservatives far more cunning and apocalyptic in outlook than any of the amateurs who populate Trumps gang. These were men who dreamed of civilization-annihilating wars and found a president willing to transform their dreams into crackling reality.

The blood on Bushs hands will never dry. Under the guise of spreading democracy, his administration brought suffering to the world and strangled civil liberties at home. The Patriot Act ushered in a dystopian national security state that was maintained by Obama and bequeathed to Trump. Bushs economic policies, along with failures by Bill Clinton and Ronald Reagan, fed the worst economic collapse since the Great Depression.

Trump may be more bumbling and unseemly than Bush, but if he avoids waging war on such a horrific scale, he will have averted true catastrophe. Like John McCain, who never met a foreign conflict he didnt want American troops to die in, Bush is one of those statesmen who has acquired a new shine in the age of Trump, welcoming to pundits in the context of such disorder.

Because of Trumps chaos, there is a fetish these days for military men. Democrats hope the generals can stage a coup, restore order, and some stern-faced strongman with good table manners and an affinity for land wars can occupy the Oval Office. He will take chummy phone calls from Paul Wolfowitz, Donald Rumsfeld and Dick Cheney. He will dream anew of nation-building.

This is the world that gave rise to Bushs presidency and nurtured his most heinous sins. Perhaps, in the months to come, Bush will emerge as a stiff-lipped anti-Trumper and CNN will cheer. That would be a good career move for him.

Anything to make people forget a presidency that truly ruined the country and world.