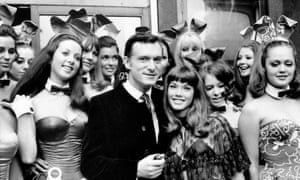 Hugh Hefner at the Playboy club, London, in 1969. Photograph: AP

That powerlessness of others seems to be desired and relished in these cases. Its time to talk about the fact that many men seem erotically excited by their ability to punish, humiliate, inflict pain on women the subject of a lot of porn. When you jerk off while cornering an unwilling woman, youre presumably excited by her powerlessness and misery or repulsion. Another of Weinsteins victims told the New Yorker, The fear turns him on. Fox News founder and CEO Roger Ailes took pleasure, according to his victims, in degrading the employees he sexually exploited and harassed. Journalist Gabriel Sherman reported in 2016, The culture of fear at Fox was such that no one would dare come forward until Gretchen Carlsson broke the silence with a lawsuit. This year several black employees sued the network for racial discrimination.

Weve also recently had a host of obituaries for Hugh Hefner. Some included the arguments that Hefner and his magazine were harmless or liberating. But they insisted that women were for men to use if they met a narrow definition of attractiveness, and to mock or ignore if they were not. While often portrayed as part of the sexual revolution, the magazine and Hefner were instead part of the counter-revolution, figuring out how to perpetuate womens subordination and mens power in a changing era.

The young women who lived in and sometimes described feeling trapped in the Playboy mansion were there to please the old goat at the centre of it and his friends, and not the other way around. Some of the playmates ended up dead Dorothy Strattens face blown off by an estranged ex-husband at 20, Paula Sladewskis body found burned beyond recognition in a Miami dumpster, and so forth. News anchor and Roger Ailes victim Andrea Tantaros said of the Fox network, behind the scenes, it operates like a sex-fuelled, Playboy mansionlike cult, steeped in intimidation, indecency and misogyny, which is not an endorsement of the Playboy mansion.

There is a solution, but I dont know how we reach it, except in a plethora of small acts that accrete into a different world view and different values. Its in how we raise boys, in what we define as erotic, in how men can discourage each other from the idea that dominating and harming women enhances their status. Perhaps its in young men in power learning from the fall of Roger Ailes, Bill Cosby, Bill OReilly, and now Harvey Weinstein and myriad Silicon Valley executives and more than a handful of academics that women have voices and, sometimes, people who listen believe them, and the era of impunity might be fading from view. Though the change that really matters will consist of eliminating the desire to do these things, not merely the fear of getting caught.

In Darren Aronofskys film Mother!, Jennifer Lawrence plays a young earth goddess of a woman restoring her poet husbands house to the best of her ability, alone, while he ignores her requests to have some say in what does and doesnt happen, who does and does not enter their home. You can interpret the story, as Aronofsky intended, as an environmental allegory in which the house is the earth, the destruction is environmental destruction, the recklessness that accompanies selfishness. Or you can just see it as a film about things going increasingly wrong in an unequal marriage between an egomaniac without empathy and a woman who is all too giving and not respected, by her husband or by the increasingly destructive guests. It workseither way.

Its a film for our time and one I can only hope captures a moment that will pass, because I want the ideals of democracy to be at last fulfilled, because its past time to talk seriously about the poisonous lack of empathy and imagination that lies behind the corpses and the nightmares and the everyday fears.