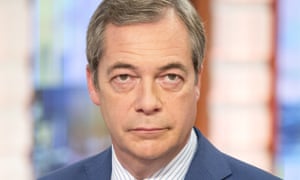 Because if theres one person whos in the middle of all of this, but who has escaped any proper scrutiny, its Nigel Farage. Thats Nigel Farage, who led the Leave.EU campaign, which is being investigated by the Electoral Commission alongside Cambridge Analytica, about whether the latter made an impermissible donation of services to the Leave campaign. Nigel Farage who visited Donald Trump and then Julian Assange. Who is friends with Steve Bannon and Robert Mercer. Who headed an organisation Ukip which has multiple, public, visible but almost entirely unreported Russian connections. Who is paid by the Russian state via the broadcaster RT, which was banned last week from Twitter. And who appears like clockwork on British television without any word of this.

Try to follow this on a daily basis and its one long headspin: a spiders web of relationships and networks of power and patronage and alliances that spans the Atlantic and embraces data firms, thinktanks and media outlets. It is about complicated corporate structures in obscure jurisdictions, involving offshore funds funnelled through the black-box algorithms of the platform tech monopolists. That its eye-wateringly complicated and geographically diffuse is not a coincidence. Confusion is the charlatans friend, noise its accessory. The babble on Twitter is a convenient cloak of darkness.

Yet its also quite simple. In a well-functioning democracy, a well-functioning press and a well-functioning parliament would help a well-functioning judiciary do its job. Britain is not that country. There is a vacuum where questions should be, the committees, the inquiries, the headlines on the TV bulletins. What was Nigel Farage doing in the Ecuadorian embassy? More to the point: why has no public official asked him? Why is he giving speeches for money in the US? Whos paying him? I know this because my weirdest new hobby of 2017 is to harry Arron Banks, the Bristol businessman who was Ukip and Leave.EUs main funder, and Andy Wigmore, Leave.EUs comms man and Belizes trade attache to the US, across the internet late at night. Wigmore told me about this new US venture an offshore-based political consultancy working on Steve Bannon-related projects in a series of tweets. Is it true? Who knows? Leave.EU has learned from its Trumpian friends that black is white and white is black and these half-facts are a convenient way of diffusing scandal and obscuring truth.

What on earth was Farage doing advancing Calexit Californian Brexit? And why did I find a photo of him hanging out with Dana Rohrabacher, the Californian known in the US press as Putins favourite congressman? The same Dana Rohrabacher whos met with Don Trump Jrs Russian lawyer and wait for it also visited Julian Assange in the Ecuadorian embassy. And who is now interceding on his behalf to obtain a pardon from Don Trump Juniors dad.

(You got this? Farage visited Trump, then Assange, then Rohrabacher. Rohrabacher met Don Trumps Russian lawyer, Natalia Veselnitskaya. Then Assange. And is now trying to close the circle with Trump.)

In these post-truth times, journalists are fighting the equivalent of a firestorm with a bottle of water and a wet hankie. We desperately need help. We need public pressure. We need parliament to step up and start asking proper questions. There may be innocent answers to all these questions. Lets please just ask them.