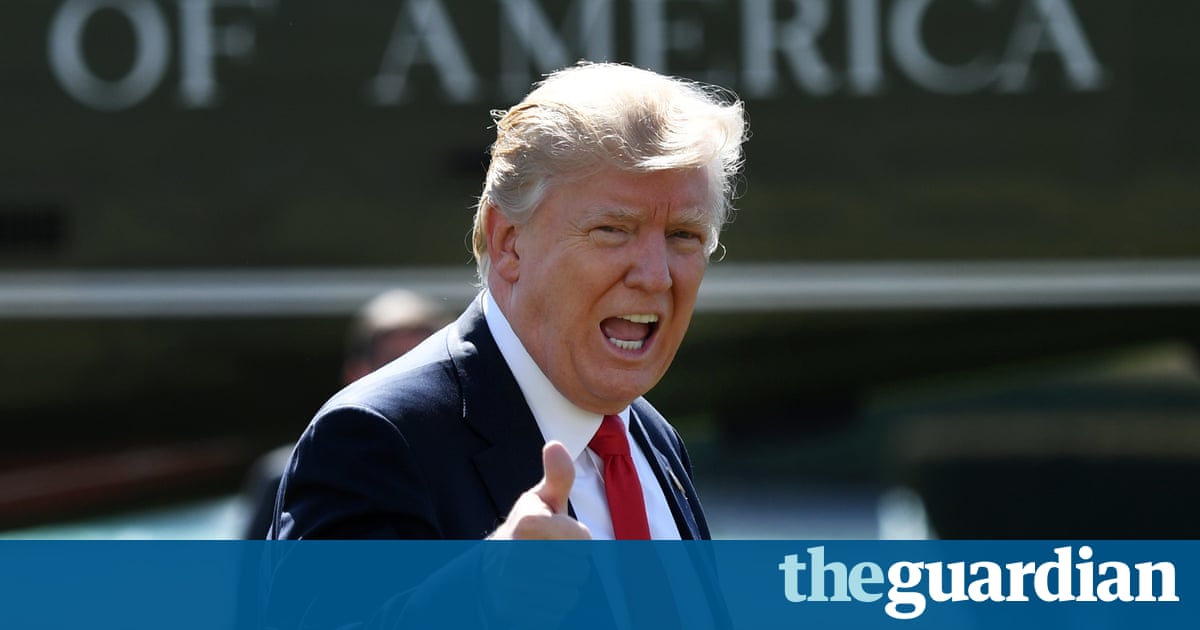 Donald Trump once dismissed it as a hoax created by the Chinese to destroy American jobs, but on a freezing Thursday night in the eastern US the president found himself pining for some of that good old global warming.

On holiday in Florida on Thursday, Trump wondered if global warming might not be such a problem after all.

As severe cold and record amounts of snow swept across the US east coast, Trump wrote on Twitter that his people could use a little bit of that good old Global Warming that our Country, but not other countries, was going to pay TRILLIONS OF DOLLARS to protect against.

Bundle up! he added.

The president was reheating two favourite tropes: the conflation of weather with climate to pour scepticism on global warming, and the supposed cost to the American taxpayer of the Paris climate accord, from which he has confirmed the US will withdraw.

Climate scientists, however, have long warned against using individual weather events to ponder the existence or otherwise of global warming. Weather, they point out, refers to atmospheric conditions during a short period; climate relates to longer-term weather patterns.

There is a fundamental difference in scale between what weather is and what climate is, he said. Whats going on in one small corner of the world at a given moment does not reflect whats going on with the planet.

The extreme cold snap in the eastern US is a rare example of a place experiencing below-average winter temperatures, he said, a point that was neatly illustrated by a map tweeted out by the Weather Channel on Friday.

Elsewhere, Matthew England, a climate scientist from the University of New South Wales, called Trumps comment an ignorant misconception of the way the earths climate works.

Nobody ever said winter would go away under global warming, but winter has become much milder and the record cold days are being far outnumbered by record warm days and heat extremes, he said. Climate change is not overturned by a few unusually cold days in the US.

David Karoly, a climate scientist from the University of Melbourne, put it even more bluntly: Its winter in the US. Cold temperatures are common in winter.

Climate modelling showed cold snaps like the one in the US were actually becoming less common as a result of global warming, Karoly said, adding that rapid attribution analysis means scientists are now able to look more closely at classes of events.

That type of modelling for the north-east of the US, he said, showed that although there was a great deal of year-to-year variability, the average coldest temperature in December in the region has increased in the past 50 years.

In any case, the US is already getting that good old global warming. 2017 is set to be the third-warmest on record, prompting among other things a climate-fuelled hurricane season in the countrys south.

Experts also know climate change is linked to a dangerous pattern of major weather events. According to the National Oceanic and Atmospheric Administration (NOAA), the US is on track to match or exceed the previous record year for extreme weather and climate events costing more than $1bn, including wildfires, hurricanes and flooding.

Adam Smith, a climatologist at NOAA, said: Climate change is playing a role, amplifying the frequency and intensity of some types of extreme weather that lead to billion-dollar disasters.

With Hurricane Harvey devastating Texas and extraordinary wildfires in California, Smith said 2017 was expected to shatter the record for the USs costliest year in terms of weather events. That was 2005, with losses of $215bn from disasters including Hurricane Katrina.

Trumps tweet also revisited his claim that the Paris climate accord would have cost the US trillions of dollars. At a rally in Pennsylvania in April to mark his 100th day in office, Trump said full compliance with the agreement could ultimately shrink Americas GDP by $2.5tn over a 10-year period.

The politically non-aligned website Factcheck.org asked the White House for a source for that remark, and was pointed to a 2016 study by the conservative Heritage Foundation which found the Paris agreement will result in over $2.5tn in lost GDP by 2035.

While that is an 18-year period, not 10, Factcheck.org found the accuracy of Heritages statements depended on which numbers were used. The Heritage study used a carbon tax rate of $36, increasing 3% each year from 2015 to 2035. Other analyses have found the US would have needed only a carbon tax of $21.22 starting in 2017 to meet its Paris target by 2025.

Leiserowitz, meanwhile, criticised the presidents use of social media. Its meant to be red meat for his base, he said. Theyre the ones most likely to be dismissive of climate change and the most likely to vote in the 2018 Republican primaries so its a warning shot for the GOP members in Congress.

The global warming tweet, he said, was another attempt by Trump to distract from special counsel Robert Muellers Russia investigation.

He added that the idea a cold snap disproves global warming is a zombie argument, because though its killed over and over by the science it keeps coming back for more brains.

Trumps tweet was troll-like, the scientist said, showing the president delighting in sparking outrage among [his] opponents.