US to allow imports of elephant trophies from Zimbabwe – Trending Stuff 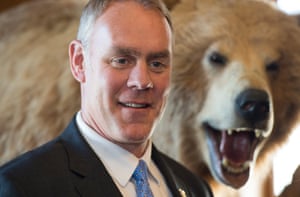 The decision by the US Fish and Wildlife Service (USFWS) to reverse the ban, which will also apply to trophies from Zambia, follows moves in favour of the US hunting sector that are worrying some observers. Last week US interior secretary, Ryan Zinke, a hunter himself and a keen supporter of hunting policies, established an International Wildlife Conservation Council It has a clear focus, the African Wildlife Foundation has pointed out, on promoting the hunting industry, not conservation. Trumps sons Donald Jr and Eric are well-known hunting enthusiasts.

The USFWS decision to lift the ban was announced at the African Wildlife Consultative Forum in Tanzania an event co-hosted by Safari Club International (SCI), a hunting rights group. The US Humane Society said the announcement showed an uncomfortably cozy relationship between SCI and the Trump administration.

Paul Babaz, the president of SCI, said the decision shows the administration recognizes that hunting is beneficial to wildlife and that these range countries know how to manage their elephant populations.

The National Rifle Association (NRA), which joined with SCI to challenge the elephant trophy ban in court, also praised the rollback.

This is a significant step forward in having hunting receive the recognition it deserves as a tool of sound wildlife management, which had been all but buried in the previous administration, said Chris Cox, executive director of the NRAs Institute for Legislative Action.

Hunting elephants is legal under strict permit systems in several African countries, and the revenue is crucial, some argue, for supporting conservation efforts. The large fees that trophy hunters pay in order to be allowed to shoot elephants, lions and leopards can be a significant source of revenue. In Zimbabwe, according to the Safari Operators Association, annual revenue this year could be as much as $130m, mainly from the US market.

But there has been an international backlash against the practice. A huge outcry over the shooting of Cecil the lion by Walter Palmer in 2015 led to calls for the dentist to be jailed, and trophy hunters are now regularly named and shamed by campaign groups. A petition to ban trophy hunting currently has 146,000 signatures.

The move from the US is seen by some as a step backwards from its strong stance against the illegal ivory trade; ivory poaching has led to a catastrophic drop in elephant populations around the world over the last 15 years.

The US government has been a global leader in the fight to reverse the dangerous declines among Africas most iconic species such as elephant, rhino, and lion. It is unfortunate that the Trump administration is willing to sacrifice that leadership position, said Jeff Chrisfield, African Wildlife Foundations chief operating officer. Well-managed hunting can play a role in conservation. However, US policy on wildlife conservation should be informed by science, not by professional hunters and the gun lobby.

How someone could want to shoot such an intelligent, empathetic animal as an elephant is beyond me, said Frank Pope, CEO of Save the Elephants. But what is most concerning for elephants is that renewed imports of trophy ivory into the US might undermine the all-important ivory trade bans put in place by America and China.

China continues to show strong leadership and will close all ivory trade within her borders by the end of the year. Up to now American actions on elephants and ivory have been admirable. The fire of the ivory trade seems to be dying. The last thing we need is a sudden blast of oxygen from a misguided policy change.