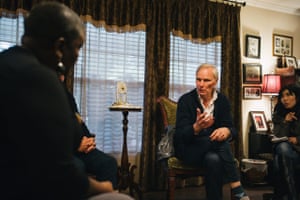 Philp Alston talks to a resident. Many families in Butler and Lowndes counties choose to live with open sewer systems made from PVC pipe. Photograph: Bob Miller for the Guardian

Despite its proud history, Catherine Flowers estimates that 70% of households in the area either straight pipe their waste directly onto open ground, or have defective septic tanks incapable of dealing with heavy rains.

When her group, Alabama Center for Rural Enterprise (Acre), pressed local authorities to do something about it, officials invested $6m in extending waste treatment systems to primarily white-owned businesses while bypassing overwhelmingly black households.

Thats a glaring example of injustice, Flowers said. People who cannot afford their own systems are left to their own devices while businesses who do have the money are given public services.

Walter, a Lowndes County resident who asked not to give his last name for fear that his water supply would be cut off as a reprisal for speaking out, lives with the daily consequences of such public neglect. You get a good hard rain and it backs up into the house.

Thats a polite way of saying that sewage gurgles up into his kitchen sink, hand basin and bath, filling the house with a sickly-sweet stench.

Given these circumstances, what does he think of the ideology that anyone can make it if they try?

I suppose they could if they had the chance, Walter said. He paused, then added: Folks arent given the chance.

Had he been born white, would his sewerage problems have been fixed by now?

After another pause, he said: Not being racist, but yeah, they would.

Round the back of Walters house the true iniquity of the situation reveals itself. The yard is laced with small channels running from neighboring houses along which dark liquid flows. It congregates in viscous pools directly underneath the mobile home in which Walters son, daughter-in-law and 16-year-old granddaughter live.

It is the ultimate image of the lot of Alabamas impoverished rural black community. As American citizens they are as fully entitled to life, liberty and the pursuit of happiness. Its just that they are surrounded by pools of excrement.

This week, the Black Belt bit back. On Tuesday a new line was added to that simple graphic, showing exactly the same half-moon across Alabama except this time it was not black but blue.

It depicted the army of African American voters who turned out against the odds to send Doug Jones to the US Senate, the first Democrat from Alabama to do so in a generation. It delivered a bloody nose to his opponent, the alleged child molester Roy Moore, and his puppetmasters Steve Bannon and Donald Trump.

It was arguably the most important expression of black political muscle in the region since Kings 1965 march. If the previous entries in the graphic could be labeled soil, slavery and poverty, this one should be captioned empowerment.

So how does Alston view the role of UN rapporteur and his visit? His full report on the US will be released next May before being presented to the UN human rights council in Geneva.

Nobody expects much to come of that: the world body has no teeth with which to enforce good behavior on recalcitrant governments. But Alston hopes that his visit will have an impact by shaming the US into reflecting on its values.

My role is to hold governments to account, he said. If the US administration doesnt want to talk about the right to housing, healthcare or food, then there are still basic human rights standards that have to be met. Its my job to point that out.

Alstons previous investigations into extreme poverty in places like Mauritania pulled no punches. We can expect the same tough love when it comes to his analysis of Puerto Rico, the next stop on his journey into Americas dark side.

Three months after Maria, the devastation wrought by the hurricane has been well documented. It tore 70,000 homes to shreds, brought industry to a standstill and caused a total blackout of the island that continues to cause havoc.